On October 18, 1898, American troops fighting in the Spanish-American War raised the United States flag in Puerto Rico formalizing U.S. control of the former Spanish colony. General Nelson A. Miles had landed approximately 3,500 U.S. troops on the island on July 25. On August 12, Spain and the United States agreed to an armistice; on September 13, the Protocol of Peace was ratified; and on December 10, the Treaty of Paris was signed, ending the Spanish-American War.

Spanish exploration of the island, located between the Caribbean Sea and the North Atlantic Ocean, began in 1493 when Christopher Columbus visited during his second journey to the New World. In 1508, Spanish explorer Juan Ponce de León established the first permanent Spanish settlement there at the town of Caparra. 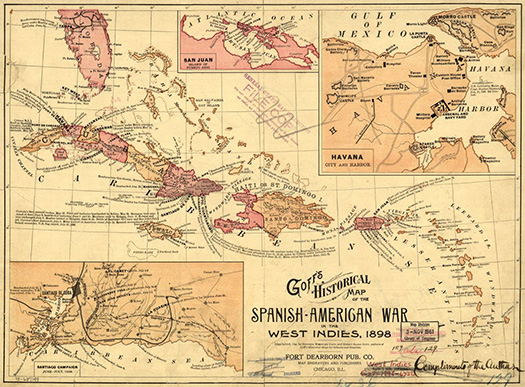 Puerto Rico was subjected to frequent raids by the Carib Indians and, later, by French, British, and Dutch pirates. The Spanish built a number of forts for protection from these raiders. They included La Fortaleza (begun in 1533), Fort San Felipe del Morro (1539), Fort San Cristóbal (1634), and Fort San Juan de la Cruz (1606). La Fortaleza, also known as the “Palacio de Santa Catalina,” was and continues to be the residence of Puerto Rico’s governors.

In the nineteenth century, improved colonial administration fostered a successful plantation economy based on the production of sugar, tobacco, and especially coffee. Slavery was gradually abolished peacefully between 1866 and 1873. In the early 1880s, Puerto Ricans (at the time under Spanish rule) began to work for independent government. They reached their goal in 1897; however, a year later, Spain ceded the island to the United States under the provisions of the 1898 Treaty of Paris, which ended the Spanish-American War.

In 1917, Puerto Rico became a U.S. territory and its people became U.S. citizens. Migration from rural areas to metropolitan regions increased during the twentieth century as industry supplanted agriculture in the island economy. Starting in the 1920s, Puerto Ricans began leaving the island to seek employment in cities like New York where they formed communities called barrios. 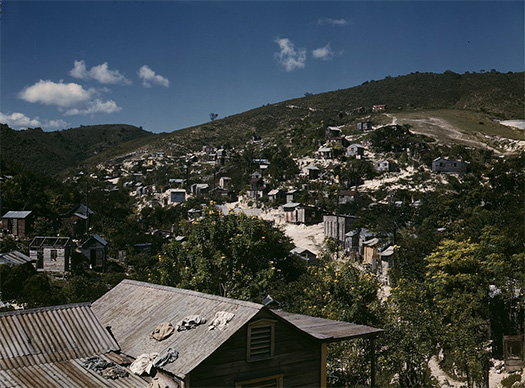 Popularly elected governors have served in Puerto Rico since 1948. In 1952, a constitution was enacted providing for internal self-government. Since then, Puerto Rico has been an incorporated, organized territory of the United States with commonwealth status. 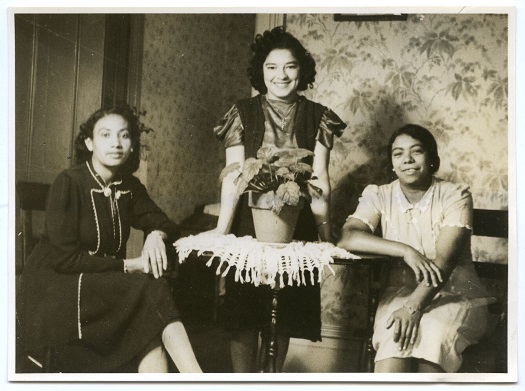 Learn More
In 1939, folk music collector Sidney Robertson Cowell recorded three women vocalists living in Oakland (pictured above) as part of The WPA California Folk Music Project [1938-40.] Her recordings of Puerto Rican songs such as “Bolero Sentimental” and “Ah, Mi Madre Querida” are collected in California Gold: Northern California Folk Music from the Thirties Collected by Sidney Robertson Cowell.
The Depression-era interviews “Cliff Webb and Billie Day” and “Harlem Rent Parties” in American Life Histories: Manuscripts from the Federal Writers’ Project, 1936 to 1940 capture aspects of the Puerto Rican immigrant experience.
Explore the collection, Puerto Rico at the Dawn of the Modern Age: Nineteenth- and Early-Twentieth Century Perspectives, which contains materials published between 1831 and 1929. See, for example, the first modern historical work on Puerto Rico, Historia geográfica, civil y natural de la isla de San Juan Bautista de Puerto-Rico, or cartographic items related to the island.
To see more images of Puerto Rico, search on Puerto Rico or San Juan in the collection of photographs from the Detroit Publishing Company and among the Farm Security Administration/Office of War Information Color Photographs.
Search for Puerto Rico and the names of Puerto Rican places and people in the bilingual collection, Parallel Histories: Spain, the United States, and the American Frontier. The collection features multimedia materials from the Library of Congress and the National Library of Spain about the interactions between Spain and the United States in America from the fifteenth to the early nineteenth centuries.
View 1492: An Ongoing Voyage to learn more about European exploration of the Western Hemisphere. This exhibition examines the first sustained contacts between Native American peoples and European explorers, conquerors, and settlers from 1492 to 1600.
Consult A Guide to the Spanish-American War which compiles links to digitized historical collections, other Library of Congress resources, external Web sites, and a selected bibliography on the war.
Visit the Hispanic Reading Room to find more resources on Latin America including The World of 1898: The Spanish-American War. This special presentation includes documents, an overview essay about the Spanish-American War, and a chronology of relevant events from 1868 to 1902. View the special presentation on Puerto Rico during wartime.
Search for Puerto Rico and the names of Puerto Rican places and people in the trilingual (English, Spanish, and Portuguese) bibliography, the Handbook of Latin American Studies, created and maintained by the Hispanic Division.
Search Congress.gov to see recent legislation in the U.S. Congress related to Puerto Rico.
Watch chef José Andrés at the 2019 Library of Congress National Book Festival speaking about his relief efforts of providing millions of meals with his team of chefs and volunteers after Puerto Rico was devastated by Hurricane Maria in 2017.