On May 27, 1937, San Francisco‘s Golden Gate Bridge was opened to the public for the first time for “Pedestrian Day,” marking the start of the weeklong “Golden Gate Bridge Fiesta” held to celebrate its completion. More than 200,000 people paid twenty-five cents each to walk the bridge. The following day at noon President Franklin Roosevelt, from across the continent at the White House, pressed a telegraph key and the Golden Gate Bridge was officially opened for vehicular use. A compilation of raw film footage External of both day’s events is available as part of the Prelinger Archive External, acquired by the Library of Congress in 2002. 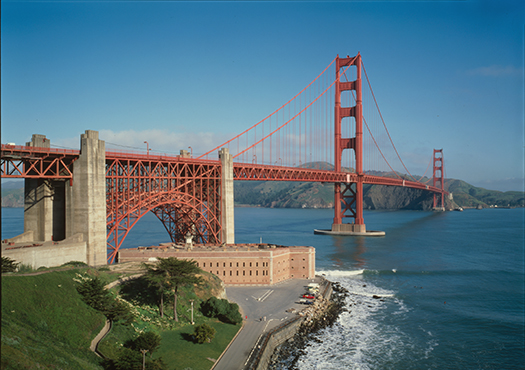 Completed just six months after its neighbor, the San Francisco Oakland Bay Bridge, the Golden Gate Bridge is painted a striking hue External known as international orange, a reddish color that was chosen to compliment the bridge’s natural surroundings. Like the George Washington, Brooklyn, and Williamsburg bridges in New York City, the Golden Gate is a suspension bridge, held up by massive steel cables strung between towers. Its central span, at 4,200 feet, remained the longest in the world until 1964 when the Verrazano-Narrows Bridge, also in New York, was completed. (Completed in 1998, the Akashi-Kaikyo Bridge in Japan, at 1,991 meters—about 6,532 feet—has the longest single span of any suspension bridge.)

The area known as the Golden Gate is the narrow channel formed at the mouth of San Francisco Bay, where a gap in the line of low mountains opens to meet the Pacific Ocean. Although topographical engineer John C. Frémont first named these rocky straights the “Chrysopylae or Golden Gate” in his report to Congress in 1848, evidence suggests that the term was in use at least a few years earlier. Fremont’s designation, which also appeared on his accompanying map of the region, caught the popular imagination when gold was discovered in California soon after. 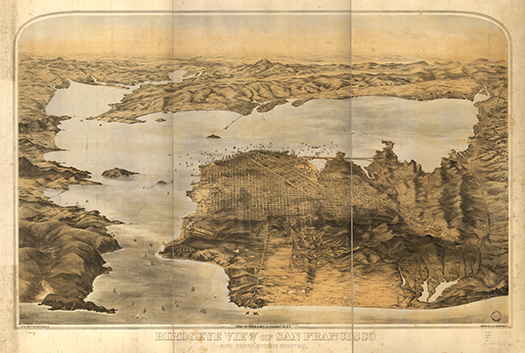 The idea of bridging the mile-wide Golden Gate channel was proposed as early as the 1870s, but it was not until the San Francisco Call and Post began an editorial campaign in 1916 that the plan received popular backing. Rocky terrain and difficult weather conditions made the task appear impossible. Following feasibility studies, however, in 1923 the California legislature passed the Golden Gate Bridge and Highway District Act; the District itself was formed six years later. Voters, despite financial uncertainty following the 1929 stock market crash, approved a $35 million construction bond in November 1930.

Bridge designer Joseph Baermann Strauss, a long-time advocate for the project, was selected as the Golden Gate’s chief engineer. Important design contributions were made by engineers Charles Ellis and Leon Moissieff and by architect Irving Foster Morrow. Construction began on January 15, 1933. Strauss instituted unprecedented safety measures including an early version of the hard hat and a safety net that stretched end-to-end under the bridge. While eleven workers died during the course of the project, nineteen others whose falls were broken by the net became known as the “Half-Way-to-Hell Club.” 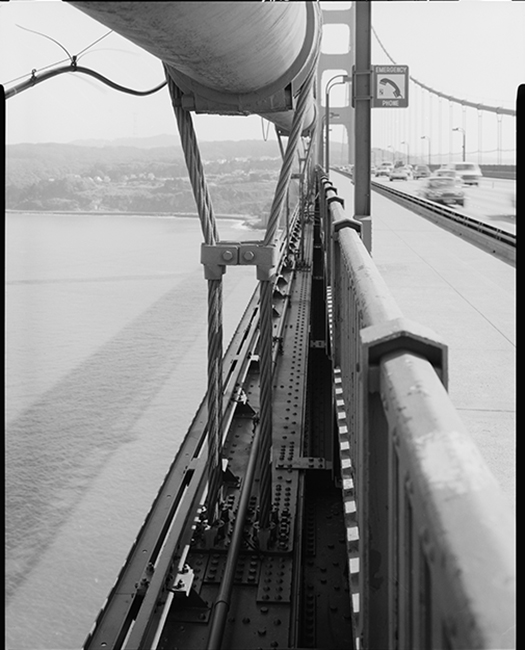 The Golden Gate Bridge links San Francisco to the south with Marin County to the north. It connects a host of natural wonders ranging from Seal Rock to Mt. Tamalpais and the Muir Woods old growth forest; and to architectural achievements from San Francisco’s early modern Hallidie Building to Marin County’s Civic Center designed by Frank Lloyd Wright.

Like New York Harbor’s Statue of Liberty, San Francisco’s Golden Gate Bridge has become an icon for its setting and its city. In May 1987, to celebrate the bridge’s fiftieth anniversary, some 300,000 individuals walked the bridge in an event dubbed “Bridgewalk ’87.” Two years later, on October 17, 1989, the gracefully suspended bridge withstood the 7.1-magnitude Loma Prieta earthquake without incident.

Learn More
San Francisco and Marin Counties lie along the San Andreas Fault and have experienced many earthquakes, the most seismographically powerful occurring in 1838, 1865, 1906, and 1989. The Before and After the Great Earthquake and Fire: Early Films of San Francisco, 1897 to 1916 collection includes motion pictures of San Francisco prior to and just after the 1906 earthquake.
Learn about the Golden Gate before there was a bridge. View the early film Panoramic View of the Golden Gate and read about San Francisco by the Sea. Search the collection “California as I Saw It:” First-Person Narratives of California’s Early Years, 1849 to 1900 on Golden Gate for descriptions and stories and to understand the area’s importance to early Californians.
Search on Seal Rocks in Evolution of the Conservation Movement, 1850-1920 to learn about Congressional legislation of the mid-1880s “to grant certain Seal Rocks to the city and county of San Francisco…in trust for the people of the United States.” It was intended to “keep said rocks free from encroachment by man, and…preserve from molestation the seals and other animals now accustomed to resort there” and is an early example of Congressional wildlife protection accomplished by means of a grant to a local authority.
HABS/HAER Highlights is a sampling of the records in the Historic American Buildings Survey (HABS) and the Historic American Engineering Record (HAER) collections, among the largest and most heavily-used in the Library of Congress Prints and Photographs Division. Explore this preview, designed to represent the depth and breadth of the collections, or search the full online collection titled Historic American Buildings Survey/Historic American Engineering Record/Historic American Landscapes Survey. Browse the collection by place to find other San Franciscostructures or search on the term bridge to see many different types of bridges from across the United States.

« NTVUganda has added SEEDS OF GOLD video (Previous News)
(Next News) UGANDA: Many graduates are illiterate »