British scientist James Smithson died on June 27, 1829. He left an endowment “to the United States of America, to found at Washington, under the name of the Smithsonian InstitutionExternal, an “establishment for the increase and diffusion of knowledge among men.” Some regarded his bequest as a trifle eccentric, considering Smithson had neither traveled to nor corresponded with anyone in America. 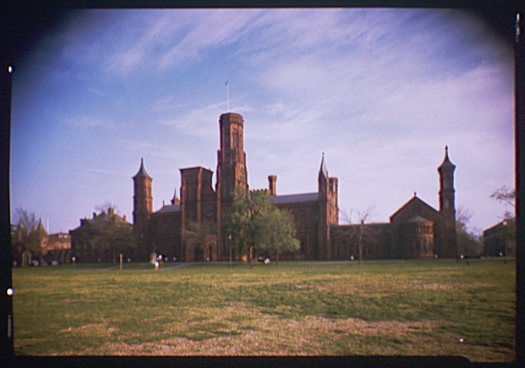 A fellow of the venerable Royal Society of London from the age of twenty-two, Smithson published numerous scientific papers on mineralogy, geology, and chemistry. He proved that zinc carbonates were true carbonate minerals, not zinc oxides; one calamine (a type of zinc carbonate) was renamed “smithsonite” posthumously in his honor.

An act of Congress signed by President James K. Polk on August 10, 1846, established the Smithsonian Institution. After considering a series of recommendations, which included the creation of a national university, a public library, or an astronomical observatory, Congress agreed that the $508,318 bequest would support the creation of a museum, a library, and a program of research, publication, educational outreach, and collection in the natural and applied sciences, arts, and history. 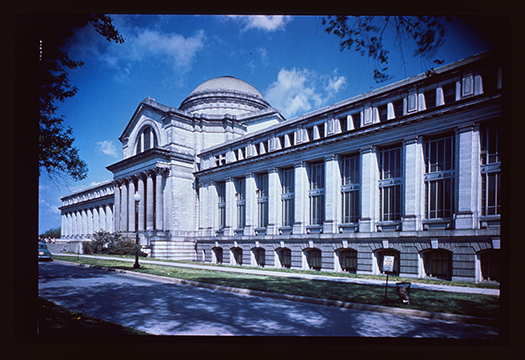 The National Air & Space Museum External, which exhibits marvels of aviation history such as the Wright brothers’ 1903 Flyer and Charles Lindbergh’s airplane, the Spirit of St. Louis, has the distinction of being the most visited museum in the world. 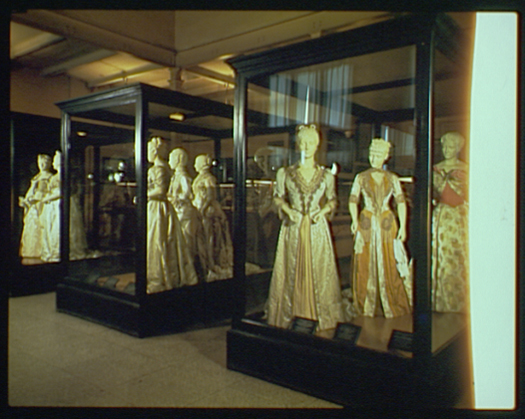 Paul Laurence Dunbar was born on June 27, 1872, in Dayton, Ohio. Although he died when he was only thirty-three, Dunbar had achieved international acclaim as a poet, short story writer, novelist, dramatist, and lyricist. 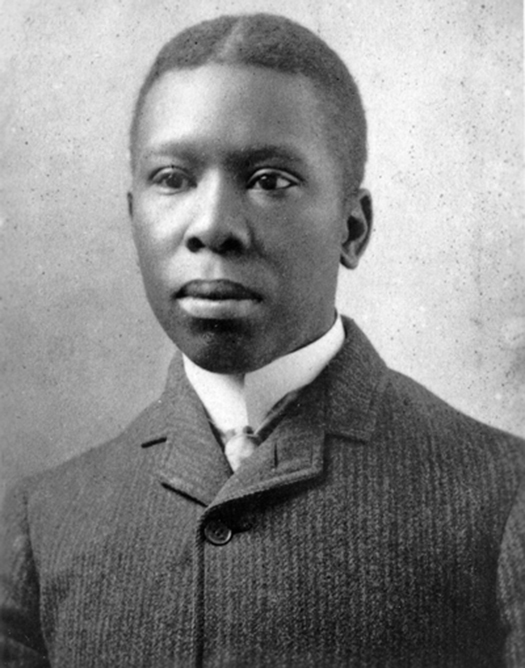 Dunbar was the child of former slaves. His father escaped bondage, fled to Canada, and returned to the U.S. to fight in the Civil War as a member of the Massachusetts 55th Regiment. At the time Dunbar’s mother escaped enslavement via the Underground Railroad, emancipation was declared. His parents met years later and married in Dayton, Ohio, where Paul was born. From his mother’s many stories of the South, young Dunbar acquired an understanding of Southern life and came to speak both Southern dialect and standard American English.

The Dayton area was a center of black religious activity. Dunbar attended the Eaker Street A.M.E. Church where he gave his very first poetry recitals. Nearby Wilberforce College boasted prominent African Americans such as W. E. B. DuBois among its faculty members.

Although he was the only African American in his middle and high schools, Dunbar was accepted by his classmates and served as editor of his high school paper and president of the literary club. He counted classmate Orville Wright as one of his best friends. Together, the two boys briefly published a newspaper, the Dayton Tattler External; their money ran out after just three issues. 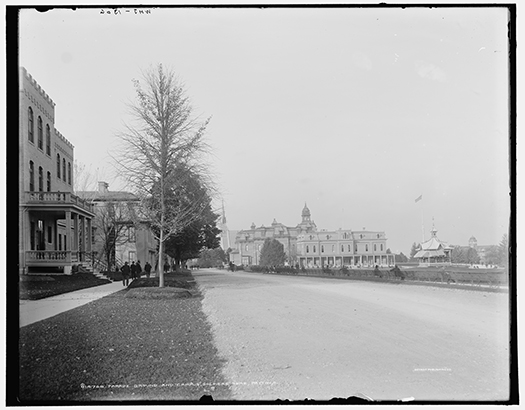 Dunbar’s parents separated when he was a child and his father lived for years at the Soldiers’ Home. In 1891, Dunbar graduated from Central High School. Central was demolished in 1894 and a new school, Steele, was constructed at the southeast corner of North Main Street and Monument Avenue. 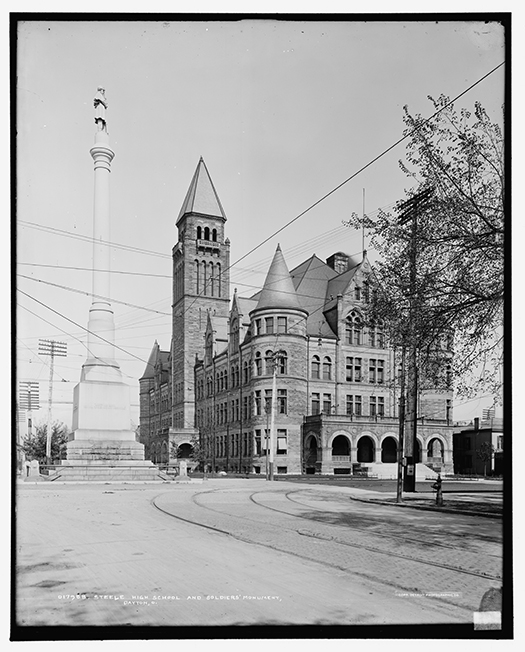 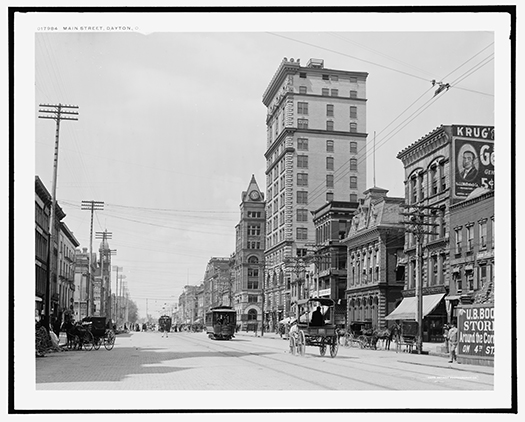 Dunbar worked as an elevator operator in the Callahan Building (spired building, above) on Main Street. In 1892, Dunbar published a volume of his own poetry entitled Oak and Ivy, which he sold to his elevator passengers.

In 1893, Dunbar went to Chicago with plans to write about the World’s Columbian Exposition where he met Frederick Douglass, then commissioner of the fair’s Haitian Pavilion. Douglass invited Dunbar to work as his personal assistant and to share the podium, supporting the young poet’s efforts. During the fair Dunbar met a number of his peers and future literary lights including James Weldon Johnson, Richard B. Harrison, and Will Marion Cook, with whom he later wrote the theatrical piece Clorinda: The Origin of the Cake Walk. (See the two 1903 films Cake Walk and Comedy Cake Walk documenting this dance featuring fancy strutting, named after the prize awarded in the original contests.)

After the publication of Majors and Minors (1895) and Lyrics of a Lowly Life (1896), Dunbar’s name became internationally recognized. During a trip to England, Dunbar met the African-British composer Samuel Coleridge-Taylor. The two men collaborated on a collection of choral pieces entitled Seven African Romances and the opera Dream Lovers.

Returning from abroad, Dunbar settled in Washington, D.C., and accepted a position as a library assistant at the Library of Congress. He found the work tiresome, however, and it is believed that the Library’s dust contributed to his worsening case of tuberculosis. He worked there for only a year before quitting to write and recite from his works full time. 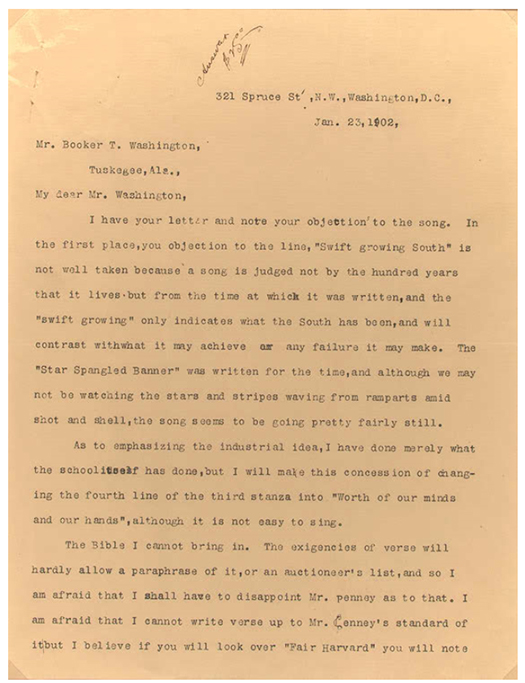 In 1902, Booker T. Washington commissioned Dunbar to write the school song for the Tuskegee Institute. Dunbar wrote lyrics to the tune of “Fair Harvard.” Washington was not pleased with the “Tuskegee Song.” He objected to Dunbar’s emphasis on “the industrial idea,” and the exclusion of biblical references. In this letter to Washington, Dunbar defends his work. 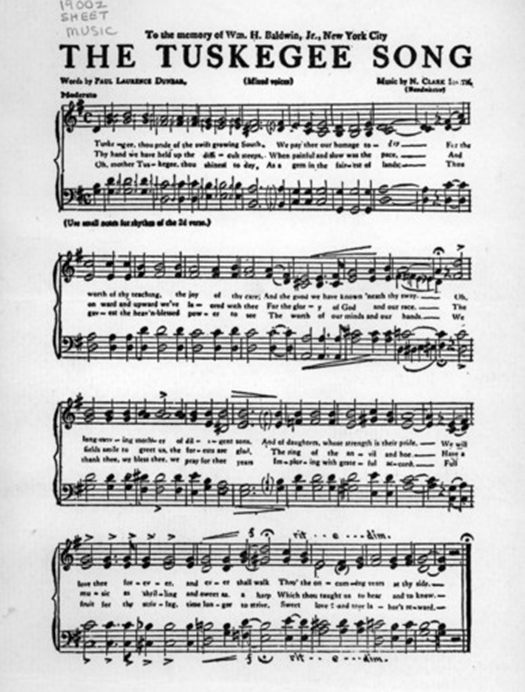 By the turn of the century, Paul Laurence Dunbar was the most celebrated black writer in America. He wrote for the broadest possible audience, yet his reputation rested on his mastery of dialect verse which employed colloquial vocabulary and spellings that were, for the most part, African American. In his use of vernacular speech, Dunbar has been compared to Mark Twain and James Whitcomb Riley.

Dunbar published twenty-two books and numerous articles and poems before his death in 1906—likely the result of a combination of factors including tuberculosis, exhaustion in the wake of pneumonia, and alcoholism.

Inscription on the grave of Paul Laurence Dunbar

Learn More
Consult the Web guide Paul Laurence Dunbar: Online Resources to locate additional resources.
Search on the name Paul Laurence Dunbar in the collection The African-American Experience in Ohio: Selections from the Ohio Historical Society External to read numerous contemporary newspaper articles about him. This collection, comprised of a selection of manuscript and printed text and images drawn from the collections of the Ohio Historical Society, illuminates the history of black Ohio from 1850 to 1920, a story of slavery and freedom, segregation and integration, religion and politics, migrations and restrictions, harmony and discord, and struggles and successes.
See the Today in History features on Dunbar contemporaries including W. C. Handy, Mary Church Terrell, and Booker T. Washington. Also search Today in History on Ohio to learn about other events and people connected with the Buckeye State.
See the online exhibition The African American Odyssey: A Quest for Full Citizenship, which explores black America’s quest for equality from the early national period through the twentieth century.
Search on the names James Weldon Johnson, Will Marion Cook, or Paul Laurence Dunbar in Historic American Sheet Music External and in African American Sheet Music External for tunes or lyrics composed by these men around the turn of the century.
Another Library of Congress employee, Daniel A. P. Murray (1852-1925) contributed a great deal to the preservation of African-American culture. Murray gathered books and pamphlets for the Exhibit of Negro Authors at the 1900 Paris Exposition, a collection that forms the nucleus of African American Perspectives: Materials Selected from the Rare Book Collection.
The famous photographer William Henry Jackson took many photos of Dayton in the early 1900s. Search the Detroit Publishing Company collection using the terms Dayton AND Jackson to see them.