On July 6, 1957, Althea Gibson won the women’s singles title at Wimbledon. She was the first African American to win a tennis championship at the historic All England Lawn Tennis & Croquet Club. 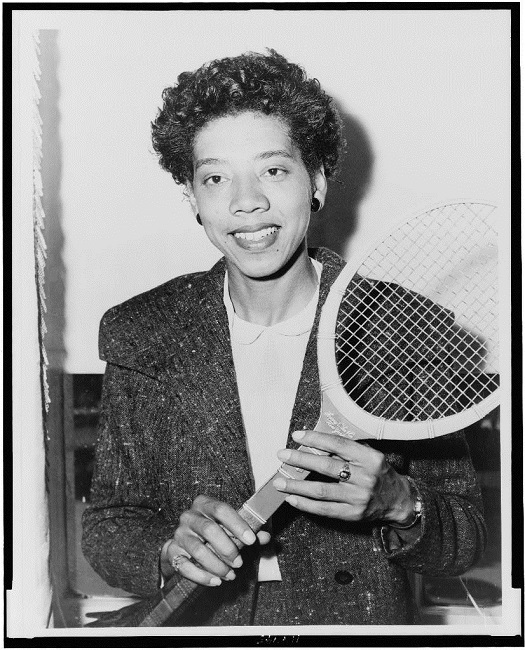 Born on August 25, 1927, in Silver, South Carolina, Gibson grew up in New York’s Harlem, a haven for black artists, musicians, and intellectuals in the 1920s. She took her first tennis lesson at the age of thirteen after receiving a tennis racket as a gift. A year later, she won her first tournament in a match sponsored by the American Tennis Association, a mainly African-American league.

Gibson won the national black women’s championship twice before attempting to gain entry into the U.S. National Tennis Championships in 1950. When it appeared that Gibson would not be admitted, Alice Marble, a four-time winner of the event, spoke out on her behalf in a letter to the American Lawn Tennis magazine. The United States Lawn Tennis Association then invited Gibson to the tournament, where she was the first African American to compete for the U.S. Nationals.

Gibson went on to win two U.S. National championships and to become the first African American to win the U.S. Nationals and the French Open. Between 1956 and 1958, she brought home several major titles, including the French Open singles and doubles, the Italian Open singles, Wimbledon singles and doubles, and the U.S. Open singles. In 1957, and again in 1958, Gibson was selected as athlete of the year by the Associated Press, the first black female so honored. In 1958, she wrote a book about her life called I Always Wanted to Be Somebody. In 1971, she was voted into the National Lawn Tennis Association Hall of Fame.

Gibson served as New Jersey’s commissioner of athletics from 1975 until 1985. In 1980 she was among the first six athletes elected to the Women’s Sports Hall of Fame. In 1991, she was the first woman to receive the Theodore Roosevelt Award, the National Collegiate Athletic Association’s top honor. 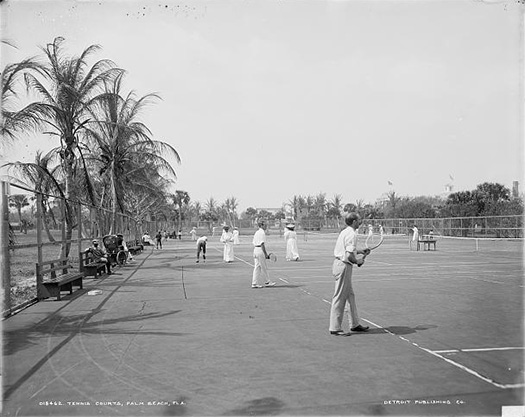 Gibson struggled against segregation throughout her career. Often she was denied entry into hotels and restaurants while on tour. Her perseverance in spite of these obstacles paved the way for many athletes who followed her, such as the tennis great Arthur Ashe.

Gibson’s same strength of character and purpose was shared by other ground breaking African-American athletes, including Jesse Owens, who won four gold medals in the 1936 Berlin Olympics during the height of Hitler’s propagation of Arian supremacy; and Jackie Robinson, who broke the color barrier in Major League Baseball in 1947.

On September 28, 2003, Gibson died after a long illness of respiratory failure at East Orange General Hospital in New Jersey. She was seventy-six years old. According to The Sports Network, several hundred mourners showed up to pay their respects to Gibson.

Search the following Digital Collections to find more information on African-American athletes as well as tennis:
American Life Histories: Manuscripts from the Federal Writers’ Project, 1936 to 1940 contains the life story of Jesse Owens.
See Today in History on Jackie Robinson or learn even more about him in the Digital Collection By Popular Demand: Jackie Robinson and Other Baseball Highlights, 1860s-1960s. Search the Today in History Collection on sports such as football or basketball to find more features about famous American athletes.
By 1900, tennis courts were a standard fixture in the growing resort industry. The American Variety Stage: Vaudeville and Popular Entertainment, 1870-1920 collection documents Americans’ burst of enthusiasm for leisure and entertainment at the turn of the century. Search this collection on resort, entertainment, or sport to locate topical movies and playscripts from the era.
For images of tennis throughout American history, search the following photograph collections on tennis:
American Landscape and Architectural Design, 1850-1920: a Study Collection from the Harvard Graduate School of Design External
Detroit Publishing Company
Farm Security Administration/Office of War Information Black-and-White Negatives
Gottscho-Schleisner Collection
Horydczak Collection
Denver Public Library Digital Collections: PhotographsExternal
Panoramic Photographs