By LIBRARY OF CONGRESS 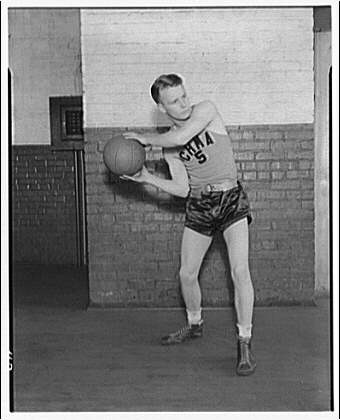 Kallenberg had met Stagg at the Young Men’s Christian Association (Y.M.C.A.) training school in Springfield, Massachusetts, where the two of them were students in 1890. In December 1891, Canadian-born James Naismith, director of physical education at the school, invented the game of basketball.

Initially, players passed or batted (with open hands) a soccer ball up and down a court of unspecified dimensions. Points were earned by landing the ball in a peach basket. Iron hoops and a hammock-style basket were introduced in 1893. Another decade passed, however, before the innovation of open-ended nets put an end to the practice of manually retrieving the ball from the basket each time a goal was scored. 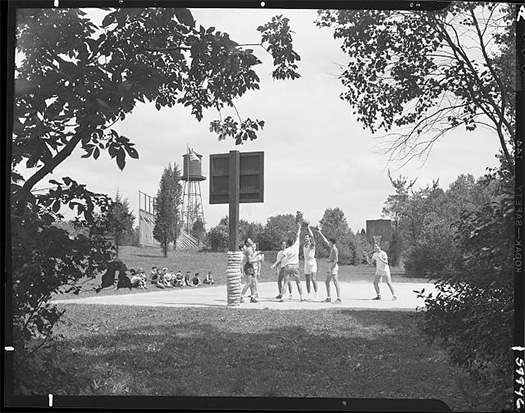 For many years the sport remained closely identified with the Y.M.C.A., even as its popularity as a college sport for men and women steadily increased. It acquired an even greater following with the introduction, in 1963, of nationally televised broadcasts of the National Collegiate Athletic Association championships. By the 1980s, basketball had gained an equal footing with baseball and football among American sports fans. 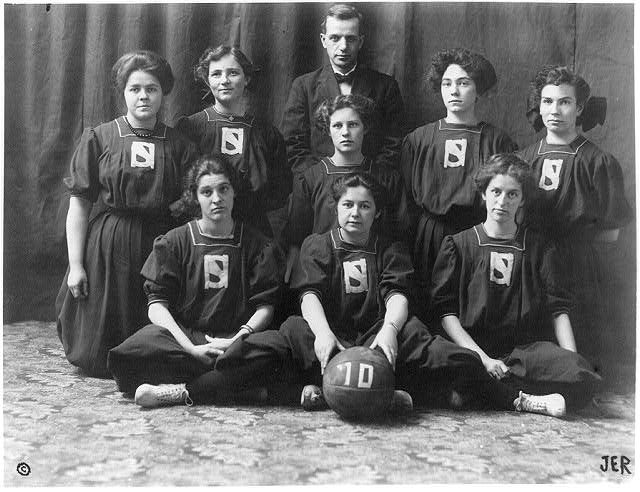 Women’s college basketball, introduced by Senda Berenson at Smith College in 1892, has become increasingly popular since the abolition in 1971 of rules limiting players’ mobility to half-court.

Learn More
Search on basketball in American Life Histories: Manuscripts from the Federal Writers’ Project, 1936 to 1940 to find more recollections of the game. After retrieving a list of hits, scroll down to any item and click on the View Results link to jump to the segment of the piece pertaining to basketball.
Find photographs of basketball players. Searchacross all the photographic collections on basketball. Of particular interest are Theodor Horydczak’s images of basketball players at Charlotte Hall Military Academy in Maryland, found in the Horydczak Collection.
Listen to radio interviews of some iconic figures from the sport of basketball in the Library’s Sports Byline collection.
Find more information about sports in American history by searching Today in History on sport or on particular sports. Subjects featured include football coach Amos Alonzo Stagg, tennis star Althea Gibson, legendary pitcher Cy Young, the first game of the modern World Series, and baseball great Jackie Robinson.

“She is glorious,” theater critic Walter Kerr raved about Carol Channing’s January 16, 1964, debut in Hello, Dolly!Wearing a carrot-colored wig, her large eyes accentuated with false eyelashes, the actress and comedienne sparkled in the role of Dolly Gallagher Levi—a widow brazenly intent upon remarrying into money. Hello, Dolly!, a musical adaptation of Thornton Wilder’s play The Matchmaker,received ten Tony awards, including Best Actress in a Musical for Channing’s performance. It was also named best musical of the 1963-64 season by the New York Drama Critics Circle. 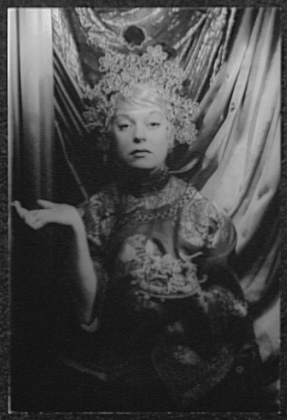 Carol Channing was born in Seattle, Washington, on January 31, 1921 and grew up in San Francisco. She first achieved stardom in 1949 for her portrayal of gold digger Lorelei Lee in Gentlemen Prefer Blondes. Several of the songs from that show, including Channing’s rendition of “Diamonds Are a Girl’s Best Friend,” became popular-music classics. In addition to her legendary Broadway career, Channing starred in nightclub acts featuring her impersonations of other popular entertainers. She died on January 15, 2019 at her home in Rancho Mirage, California. She was 97.

Playwright Thornton Wilder was among the most acclaimed American writers of his time. He won the 1928 Pulitzer Prize for fiction for his novel The Bridge of San Luis Rey and the 1938 and 1943 Pulitzer Prizes for drama for his plays Our Town and The Skin of Our Teeth, respectively. Wilder premiered The Matchmaker, a revision of his 1938 play The Merchant of Yonkers, at the Edinburgh Festival in 1954. 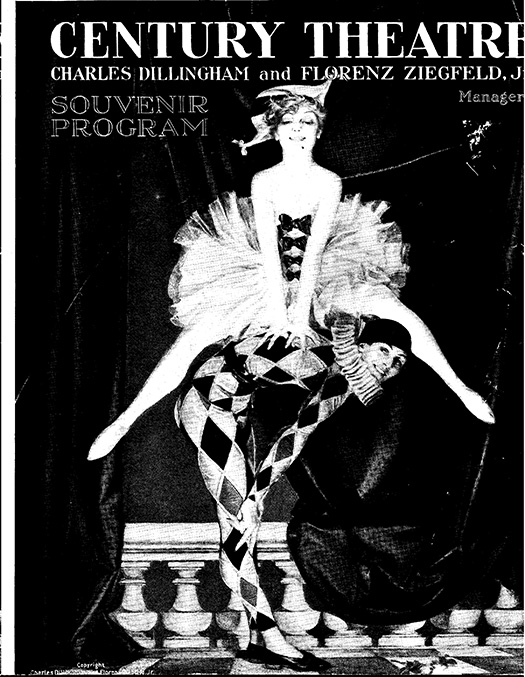 Learn More
Browse the Occupation Index of the Van Vechten Collection to locate more portraits of playwrights, singers, and other creative Americans photographed by Carl Van Vechten.
Learn more about America’s favorite entertainers by viewing Today in Historyfeatures on Jenny Lind, Lillian Russell, Harry Houdini, Bill “Bojangles” Robinson, and Louis Jordan.
Go to the Imagination section of American Treasures of the Library of Congress. Click on the section entitled “Music, Theatre, Dance” to examine treasures associated with the musicals Show Boat, West Side Story, and Porgy and Bess.
Explore the Performing Arts Digital Collectionsand the Performing Arts Databases; follow In the Muse, the Performing Arts blog, to keep up with the collections and activities of the Library’s Music Division.
The American Variety Stage: Vaudeville and Popular Entertainment, 1870-1920 collection offers a look at early popular entertainment in America. The introduction provides an overview of this collection of sound recordings, theater playbills and programs, motion pictures, and English-language and Yiddish playscripts.

« TO SAVE THEIR PARTY, REPUBLICAN SENATORS NEED TO END THE TRUMP CULT (Previous News)
(Next News) How do you deal with a generation that has grown older without growing up? »