Rev. Dr. Martin Luther King, Jr., twentieth-century America’s most compelling and effective civil rights leader, was born on January 15, 1929, in Atlanta, Georgia. After entering Morehouse College at age fifteen, King followed his father and grandfather into the Baptist ministry. He received a bachelor of divinity from Crozer Theological Seminary in 1951 and a Ph.D from Boston University in 1955.

By LIBRARY OF CONGRESS


I refuse to accept the view that mankind is so tragically bound to the starless midnight of racism and war that the bright daybreak of peace and brotherhood can never become a reality. 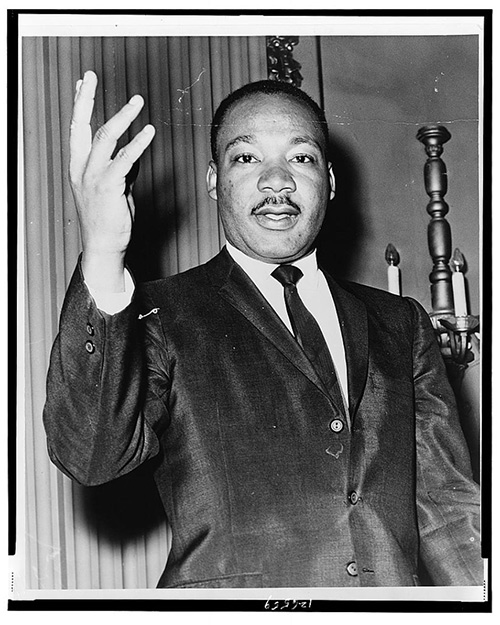 King entered the civil rights movement in 1955. A young, newly married pastor of a Montgomery, Alabama church, he was asked to lead a bus boycott aimed at ending segregation of public transport in Montgomery. The boycott, initiated by Rosa Parks’ refusal to surrender her bus seat to a white passenger, lasted over a year and resulted in the desegregation of the city’s busses.

A founder of the Southern Christian Leadership Conference, King advocated non-violent action as a means of lifting racial oppression. Sit-ins, marches, and peaceful demonstrations highlighted issues of inequality. The commitment and moral integrity of activists who remained calm in the face of violent opposition inspired national admiration. Jailed during an Alabama campaign to abolish segregated lunch counters, King delineated his philosophy of nonviolence in the now famous “Letter From the Birmingham Jail.” 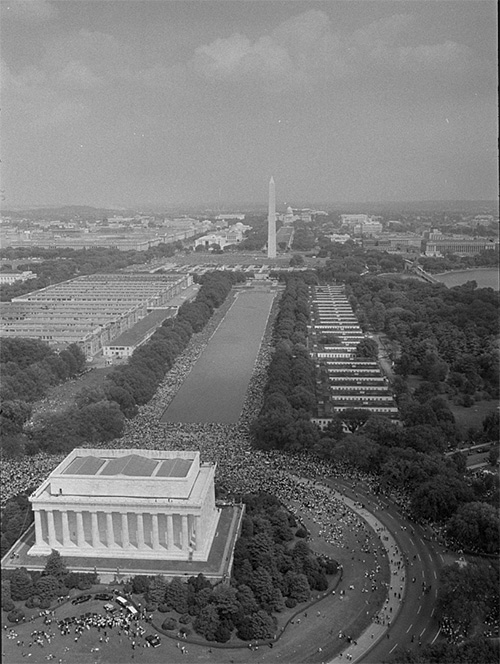 On August 28, 1963, King participated in the March on Washington for Jobs and Freedom. From the steps of the Lincoln Memorial, he delivered his famous “I Have A DreamExternal” speech, to a crowd of 250,000. An eloquent call to action, the speech emphasized his belief that the movement would create a society in which character, rather than color, prevailed.

In December 1964, Rev. Dr. Martin Luther King was awarded the Nobel Peace Prize. Labor leader A. Philip Randolph sent a congratulatory telegram praising King’s “brilliant and matchless leadership.” King responded with a letter emphasizing the prize as “an award for the whole civil rights movement and its dedicated leaders” and urging it “inspire all of us to work a little harder and with more determination to make the American Dream a reality.”

On April 4, 1968, while in Memphis, Tennessee supporting a strike by the city’s sanitation workers, Rev. Dr. Martin Luther King was assassinated as he stood on the balcony of his hotel. Just thirty-nine years old, he left a wife, Coretta Scott King, and four young children. 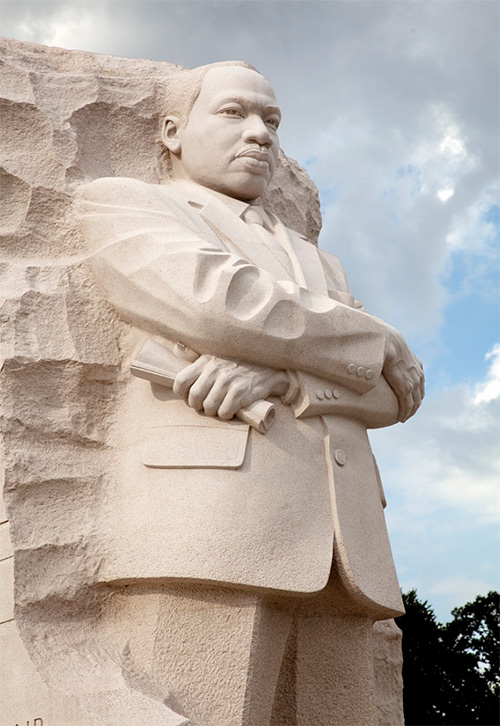 Learn More
Read the “Letter From Birmingham Jail(PDF)External,” the “Address at March on Washington External,” as well as Dr. King’s “Nobel Prize Acceptance Speech External” online at The Martin Luther King Jr. Research and Education InstituteExternal Web Site. This site encompasses The Martin Luther King, Jr. Papers Project at Stanford University as well as collections of both primary and secondary sources relating to the life of the heroic civil rights leader.
Explore the Civil Rights History Projectcollection which includes oral history interviews of participants in various aspects of the Civil Rights Movement as well as information about additional collections of materials relevant to this topic found throughout the divisions of the Library.
The Library’s Digital Collections include several that focus on African Americans such as the Rosa Parks Papers and the Frederick Douglass Papers.
A variety of collections provide insight into African-American history. African American Perspectives: Materials Selected from the Rare Book Collection makes available pamphlets covering a broad spectrum of nineteenth- and early-twentieth-century African-American life. The African-American Experience in Ohio, 1850-1920 External holds manuscripts, printed texts, and images from the Ohio Historical Society. This collection illuminates the history of black Ohio from 1850 to 1920.
Tour the Library of Congress online exhibitions The African-American Mosaic: A Library of Congress Resource Guide for the Study of Black History & Culture and The African American Odyssey: A Quest for Full Citizenship.
As the barriers of segregation fell, African Americans made new gains in their professional lives. Jackie Robinson was at the forefront of this movement. In 1947, he broke the color line in baseball. Learn more about his life in By Popular Demand: Jackie Robinson and Other Baseball Highlights, 1860s-1960s.
Today in History features on the Fourteenth Amendment and Plessy V. Ferguson place the civil rights movement in context while additional pages showcase civil rights advocates Frederick Douglass, Booker T. Washington, Mary Church Terrell, Thurgood Marshall, Ralph Bunche, and John Lewis.