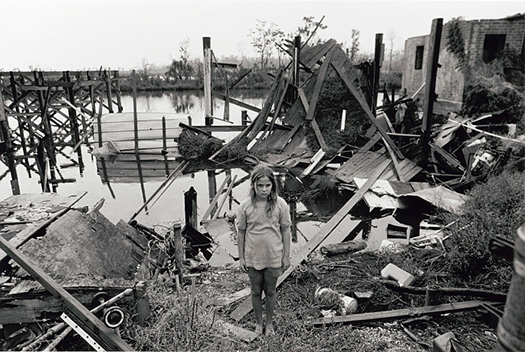 At approximately 6:10 a.m., Central Daylight Time, on August 29, 2005, Hurricane Katrina, a Category 4 storm packing winds of 145 m.p.h., made landfall out of the Gulf of Mexico near Buras, Louisiana, and headed north towards the historic city of New Orleans, Louisiana, and the state of Mississippi. At 8:14 a.m., the New Orleans office of the National Weather Service issued a flood warning stating that the city’s Industrial Canal levee had been breached. Within an hour, the neighborhood known as the Lower Ninth Ward was under six-to-eight feet of water. By then the 17th Street Canal levee had failed as well, and the waters began to rise relentlessly throughout the city. Other levees and floodwalls also failed. By the next day, eighty percent of New Orleans lay underwater, in some areas to a height of twenty feet. And Katrina had moved on, still bearing winds of 120 m.p.h., to wreak havoc across the central Gulf Coast of the United States.

“And you remember, uh, even after we couldn’t pump no more. I thought I was dreamin’ for awhile. I thought I saw bodies—dead bodies—in—in the water—”

“I don’t b’lieve that was no dream. And you know what? It’s gon’ linger with us, it’s gon’ be with us, until the rest of my life i’ gone, y’know, it gonna linger, it gonna be there with me.” 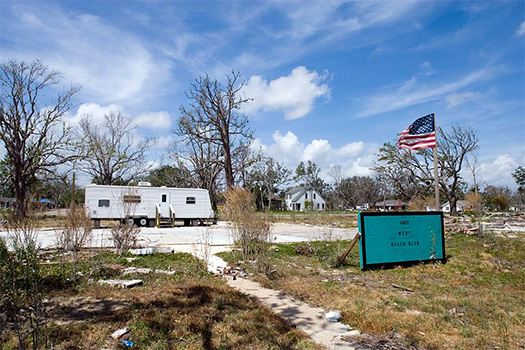 Placed between a great river and a lake, New Orleans had fought hurricanes and flooding since its founding in 1717. Only two years later, a hurricane all but destroyed it. Yet New Orleans survived, as it had survived wars and changes of empire, to become a great and beautiful city, justly famed for its extraordinary braiding of cultures, the architecture of its romantic French Quarter and its humble shotgun houses, its distinctive creole cuisine, and perhaps most of all, its importance as the birthplace of jazz. 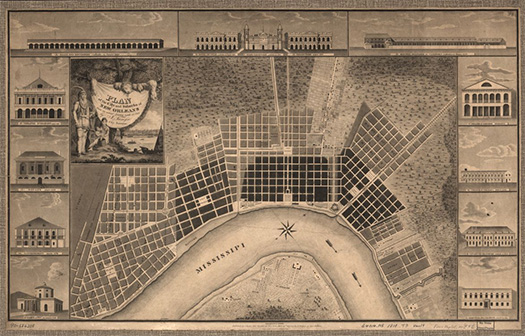 Hurricanes (called typhoons in the Pacific) have always been part of life and lore in what is now the southern and eastern United States. A French visitor described one in the vicinity of New Orleans early in September 1722:

Towards ten o’clock in the evening there sprang up the most terrible hurricane which has been seen in these quarters. At New Orleans thirty-four houses were destroyed as well as the sheds, including the church, the parsonage and the hospital. In the hospital were some people sick with wounds. All the other houses were damaged about the roofs or the walls.

It is to be remarked that if the Mississipy had been high this hurricane [an earlier storm] would have put both banks of the river more than 15 feet under water, the Mississipy, although low, having risen 8 feet.

“Journal of Diron D’Artaguiette, 1722-1723.” In Travels in the American Colonies, ed. under the auspices of the National Society of the Colonial Dames of America by Newton D. Mereness (New York: The Macmillan Company, 1916). p24. American Notes: Travels in America, 1750 to 1920. General Collections 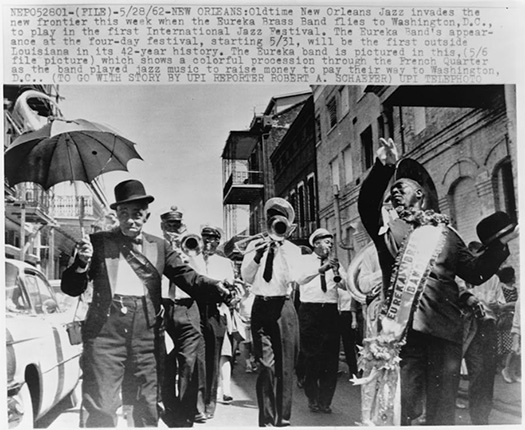 On September 8, 1900, long before adequate meteorological warning systems had been developed, a devastating hurricane hit Galveston, Texas, and left much of it in ruins. In the storm and flooding that followed, more than 8,000 people died, the highest death toll in U.S. history for a natural disaster. Katrina, for all its horrors, cost less in life than the Galveston catastrophe, though television and other mass media allowed the nation and the world to witness the storm and its aftermath as they unfolded. More than 1,600 people died, a majority in Louisiana; more than 1.5 million people were scattered from their homes, many never to return; cities and towns, familiar landscapes and historic landmarks, lay smashed in Katrina’s wake; and the scar that this hurricane left on the American psyche was ineradicable.

Hurricane Katrina all but destroyed the historic home of Jefferson Davis. While many historic homes and buildings were lost, there were a number of important homes which were saved. Many of New Orleans’s iconic buildings were located in the wealthier neighborhoods on higher ground, and these were nearly untouched. Other treasures, such as the grand old oak trees of Government Street in Mobile, Alabama, or Biloxi, Mississippi’s beloved 1848 lighthouse, were amazingly spared. And in New Orleans and throughout the Gulf, in spite of all they had suffered, Americans returned and began to build again. 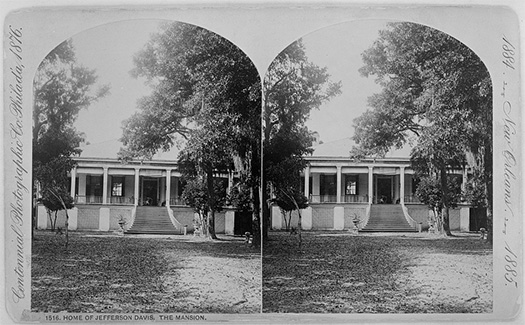 Learn More
Search the Library’s Digital Collections using keywords such as hurricane, flood, tornado, and storm for first-person accounts of other weather-related disasters in American history.
Search the multimedia collection Inventing Entertainment: The Motion Pictures and Sound Recordings of the Edison Companies on Galveston to locate motion pictures of the aftermath of the great 1900 hurricane in Galveston, Texas.
Search the collection Farm Security Administration/Office of War Information Black-and-White Negatives on terms such as hurricane, flood, and storm to see photographs of natural disasters throughout the United States during the 1930s and 1940s.
Legislation, hearings, and other actions related to Hurricane Katrina and other natural disasters affecting the United States can be found through Congress.gov, the official website for U.S. federal legislative information.
Explore the collection Louisiana: European Explorations and the Louisiana Purchase to learn about the early history of New Orleans, Louisiana, and surrounding areas in historic maps, newspapers, and other documents.
Explore the Library of Congress collaborative collections France in America/La France en Amérique and Parallel Histories: Spain, the United States, and the American Frontier/Historias Paralelas: España, Estados Unidos y la Frontera Americana to find historic books, prints, maps, and other documents as well as background material on the eras when France and Spain governed what is now New Orleans, Louisiana, and other portions of the Gulf Coast. Browse these collections or search them on words such as Orleans, Louisiana, and Mississippi to locate relevant materials.
Learn more about hurricanes and the scientific understanding of their dynamics in Hurricanes: Selected Resources in Science, a reference guide from the Library’s Science Reference Services, Science, Technology, & Business Division.