Shortly after 10:00 p.m. on April 14, 1865, actor John Wilkes Booth entered the presidential box at Ford’s Theatre in Washington, D.C., and fatally shot President Abraham Lincoln. As Lincoln slumped forward in his seat, Booth leapt onto the stage and escaped out the back door. The paralyzed president was immediately examined by a doctor in the audience and then carried across the street to the Petersen House where he died early the next morning.

[D]ying as he did die, by the red hand of violence, killed, assassinated, taken off without warning, not because of personal hate…but because of his fidelity to union and liberty, he is doubly dear to us, and his memory will be precious forever. 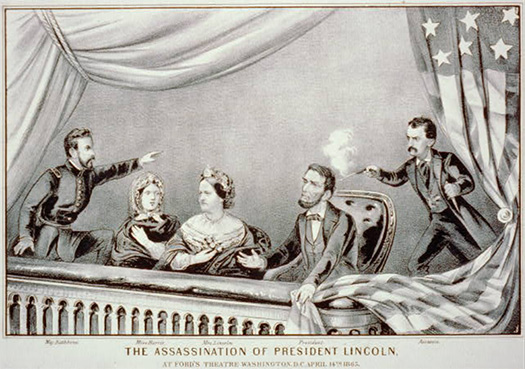 Lincoln’s assassination was the first presidential assassination in U.S. history. Booth carried out the attack five days after General Robert E. Lee had surrendered the Army of Northern Virginia to General Ulysses S. Grant at Appomattox Court House, Virginia. He thought that his action would aid the South. The suspicion that Booth had acted as part of a conspiracy of Southern sympathizers increased Northern rancor. Whether Lincoln would have been able to temper the Reconstruction policies enacted by the Radical Republicans in Congress is left to historical speculation because of his untimely death as the United States transitioned from civil war to reunification and peace. 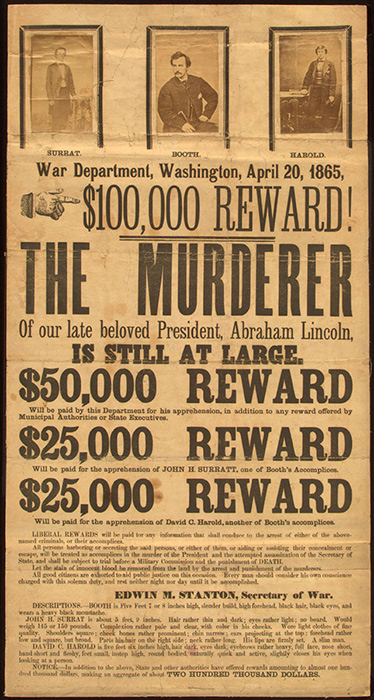 Within days of the assassination, the War Department issued wanted posters for the arrest of Booth and his accomplices John Surratt and David Herold. Booth and Herold eluded capture until April 26, when federal troops discovered them hiding in a tobacco barn near Bowling Green, Virginia. Herold surrendered, but Booth stayed under cover and was shot as the barn burned to the ground. He died later that day.

Booth’s co-conspirators Lewis Powell (alias Payne)—who had attempted to murder Secretary of State William H. Seward—George Atzerodt, David Herold, and Mary Surratt, all were executed for their part in the assassination conspiracy. Several other conspirators were sentenced to imprisonment.

The death of President Lincoln resulted in an outpouring of grief nationwide. After a funeral at the White House and lying in state at the U.S. Capitol, Lincoln’s body was transported to the railway station where it began a 1,700-mile journey back to the president’s native Springfield, Illinois. On May 4, Lincoln was finally laid to rest in a tomb at the Oak Ridge Cemetery.

Many monuments were built to honor Abraham Lincoln over the years, across the nation and around the world. On April 14, 1876, Frederick Douglass delivered an oration at the unveiling of a monument to Lincoln located in Washington, D.C.’s Lincoln Park. Better known to the nation is another memorial to Lincoln, also located in Washington, D.C. Featuring a monumental sculpture by Daniel Chester French, the Lincoln Memorial stands at the foot of the nation’s Mall and was dedicated on May 30, 1922. 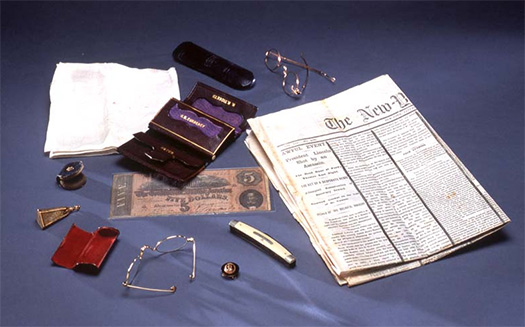 Learn More
To learn more about the assassination of Abraham Lincoln, visit the Abraham Lincoln Papers at the Library of Congress, which includes a special presentation on the Lincoln assassination.
The Alfred Whital Stern Collection of Lincolniana presents contemporary newspapers, Lincoln’s law papers, sheet music, broadsides, prints, cartoons, maps, drawings, letters, campaign tickets, and other ephemeral items. The collection includes hundreds of items related to Lincoln’s assassination.
The Law Library’s Lincoln and the Law includes a section The Assassination: Trials that contains period transcripts and reports of the trial of the surviving conspirators in the murder of the President and attempted murder of other public officials.
Joseph Holt presided over the military commission prosecuting the Lincoln assassination conspirators. The Joseph Holt Papers contain voluminous correspondence regarding the military commission as well as affidavits, depositions, transcribed testimony, various versions of the charges against the conspirators, as well as Holt’s correspondence about the trial long after the trial concluded.
With Malice Toward None: The Abraham Lincoln Bicentennial Exhibition contains a section “Now He Belongs to the Ages”, which presents a variety of items related to the assassination.
Some people believed Booth was not the man killed in Virginia on April 26, 1865. In American Life Histories: Manuscripts from the Federal Writers’ Project, 1936 to 1940 a “Mrs. J.D. Rylee” tells of an educated gentleman who stayed with her family when she was a child. She is certain it was John Wilkes Booth. See also the interview with Virginian “Robert Carter” — he too believed Booth escaped capture.
Search on the term Lincoln Memorial in Capitol and The Bay: Narratives of Washington and the Chesapeake Bay Region, ca. 1600 to 1925 to find The Development of Washington with Special Reference to the Lincoln Memorial. This address, delivered in 1910 by Glenn Brown, secretary, American Institute of Architects, to the Washington [D.C.] Chamber of Commerce, discusses the future location of the Lincoln Memorial on the national Mall.
Visit the Ford’s Theatre National Historic Site, maintained by the National Park Service, to learn more about the fateful event that occurred there.

Did you find apk for android? You can find new Free Android Games and apps.
Sharing is caring:
education, Library of Congress Library of Congress, Education Comments Off on Today in History – April 14 US President Abraham Lincoln shot dead Print this News

« Today in History – April 14 R.M.S. Titanic – LIBRARY OF CONGRESS (Previous News)
(Next News) UGANDA: Can we have a revolution to kick out Military Dictator Museveni »

Hollywood, Houdini and the Halloween Seance of 1936 — Library of Congress