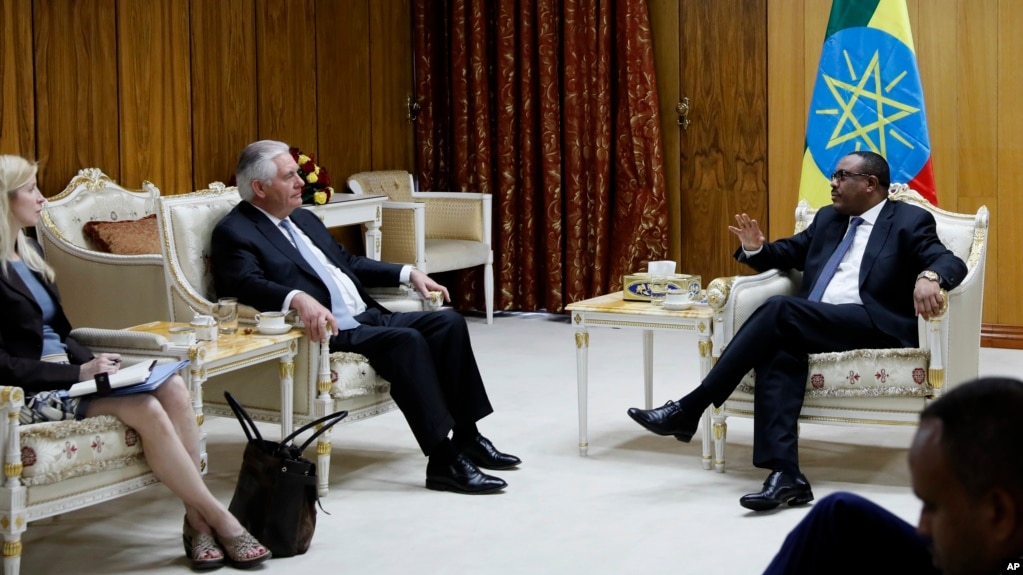 Tillerson Reaffirms US Commitment to Africa

“I think the United States commitment to Africa is quite clear in terms of the importance we place on the relationship,” said Tillerson at the African Union headquarters in Addis Ababa, Ethiopia. “The president himself wrote a personal letter to the chairperson, reaffirming the importance of this relationship.”

Trump in January reportedly used an expletive to describe Haiti and some African countries. At the time, officials from the AU and several African nations said they were outraged by the reported comments. 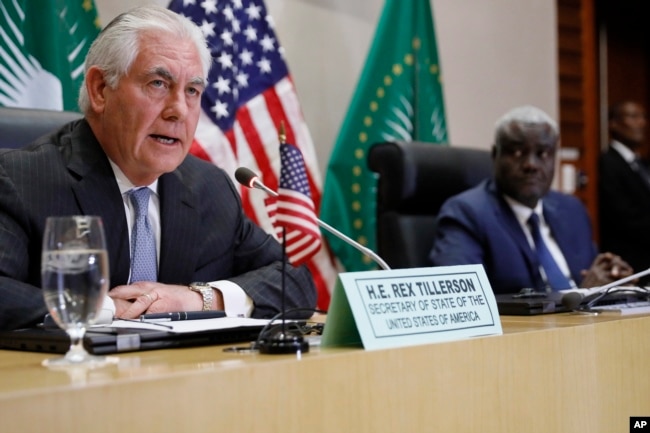 “This incident is of the past,” Mahamat said during a joint news conference with the secretary in the Ethiopian capital. “With the visit of Secretary of State Tillerson, the evidence of the relations between Africa and the United States is personified through his visit.”

Tillerson said promoting peace and security, development and trade, and good governance, are three pillars of Washington’s approach to Africa.

His visit to Addis Ababa came after Ethiopia officials decided to impose a state of emergency. But protests in the restive Oromia region have continued.

The top U.S. diplomat said after Thursday’s meeting with Ethiopian Foreign Minister Workneh Gebeyehu the answer to political turmoil in Ethiopia is greater freedom. He said he hoped to see “the country move on past the state of emergency as quickly as possible.”

Tillerson added, “We firmly believe that democratic reform, economic growth, and lasting stability are best addressed through an inclusive political process, rather than through the imposition of restrictions.”

He noted the U.S. appreciated the statements on South Sudan made at the AU summit in January, where the African body raised the possibility of sanctions for the violation of cease-fires in the conflict-stricken nation.

Meanwhile, the AU plans to sign a Continental Free Trade Agreement later this month aimed at economically integrating the continent, which has a population of 1.2 billion people and a combined estimated GDP of $3.5 trillion.

Tillerson said Washington supports “the African Union’s economic regional integration efforts to lower intra-trade barriers on the continent, boost more intra-regional trade, which we know has been a central goal of the negotiations around the constant Continental Free Trade Agreement, which we are quite supportive of.”

Leaders of the African Union, which represents 55 countries, also outlined an official theme of anti-corruption for the year of 2018 during its annual summit in January.

“We think these are all positive developments. So the continent is moving in one direction and we’re just hoping the current administration is taking noteand is also engaging this continent in a direction in which it’s trying to move,” said Brahima Coulibaly, Brookings Institution’s Africa Growth Initiative senior fellow.

But the Trump administration is under criticism for a proposed 2018 budget cut on efforts to combat HIV and AIDS.

While Tillerson has announced nearly $533 million in new humanitarian assistance for food insecurity in some African nations, the Trump administration has not proposed a signature initiative to aid Africans.

“It is unusual for a secretary of state to make a trip like this and to have no deliverables, to have no initiative that they’re ready to announce,” said Witney Schneidman, the Brookings Institution’s Africa Growth Initiative nonresident fellow.

After more than a year since entering the White House, Trump still has not nominated a chief U.S. diplomat for Africa, and embassies in the Democratic Republic of Congo, Somalia, South Africa and in five other African countries remain without ambassadors. 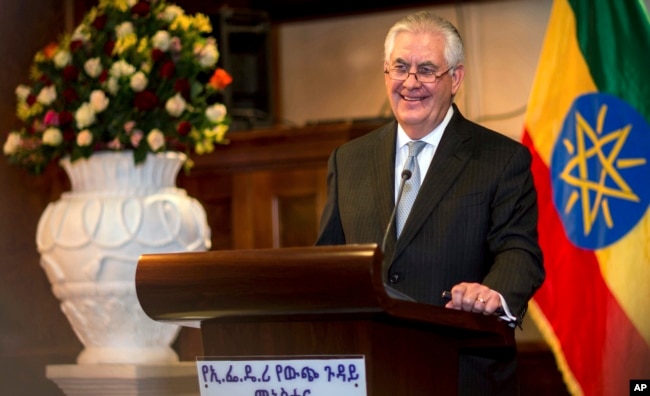 US Secretary of State Rex Tillerson, addresses the media after his meeting with Ethiopian Foreign Minister Dr. Workneh Gebeyehu, at a joint press conference in Addis Ababa, Ethiopia, March 8, 2018.

Speaking Tuesday before leaving for Africa, Tillerson said the United States is “eager” to lower barriers to trade and investment on the continent, whose largest trading partner by far is China.

He pointed up that the U.S. approach of “incentivizing good governance” contrasts sharply with China’s, “which encourages dependency, using opaque contracts, predatory loan practices and corrupt deals that mire nations in debt and undercut their sovereignty.”

Tillerson’s one-week, five-nation trip is focusing on counterterrorism, promoting peace, good governance and trade and investment. He is scheduled to meet with top officials in Chad, Djibouti, Ethiopia, Kenya and Nigeria — all of them U.S. allies in the war against terrorism and jihadist groups such as Boko Haram, al-Shabab and Islamic State.

Without partnerships to build infrastructure and achieve more economic development, Tillerson warned there will be “new ways for terrorists to exploit the next generation.”

The secretary of state also said U.S. and African leaders “must work to find long-term diplomatic solutions” to regional conflicts “that cause so much human suffering.”

« AFRICA: Tillerson assures AU in Addis Ababa that they do not live in a SHITHOLE (Previous News)
(Next News) UGANDA: Why Museveni’s Ministry of Security is a redundant docket »