THE U.S. REAFFIRMS ITS COMMITMENT TO ANGOLA AND THE ANGOLAN PEOPLE AS THEY WORK TO FIGHT CORRUPTION AND PROMOTE DEMOCRACY 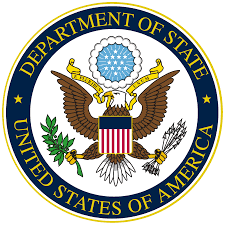 The United States and Angola: Deepening an Important Strategic Partnership

By U.S DEPARTMENT OF STATE

Secretary Pompeo will travel to Angola February 16-17 to meet with government officials, civil society representatives, and the business community to promote increased trade and investment, highlight U.S. support for Angolan political and economic reforms, and emphasize U.S. support for the Angolan people.  The Secretary will also meet with women entrepreneurs and highlight PEPFAR-funded programs designed to reduce mother-to-child HIV transmission.

THE U.S. REAFFIRMS ITS COMMITMENT TO ANGOLA AND THE ANGOLAN PEOPLE AS THEY WORK TO FIGHT CORRUPTION AND PROMOTE DEMOCRACY

More than a quarter-century after the establishment of U.S.-Angolan diplomatic relations, the U.S. commitment to Angola is strong, based on shared values, mutual support for regional peace and stability, and growing bilateral economic opportunities.

In September 2017, Angola marked a milestone in its transition to democracy by electing its first new president in 38 years. The United States supports President Lourenço’s commitment to fight corruption and enact economic and political reforms.

The U.S. supports Angola’s anticorruption fight through a number of initiatives, including a program the U.S. Department of the Treasury launched in March 2019 to improve Angola’s capacity to implement its anti-money laundering and countering the financing of terrorism (AML/CFT) regime.
In fiscal year 2019, the United States invested nearly $34 million in Angola to support life-saving health programs to combat malaria, polio, and HIV/AIDS. With assistance from the President’s Malaria Initiative, malaria deaths have decreased by over half over the past three years.
U.S. exchange programs have helped create more than 900 new Angolan leaders. Nearly 300 Angolan alumni have graduated from the Young African Leaders Initiative’s (YALI) Mandela Washington Fellowship and Regional Leadership Centers, and the digital YALI Network boasts 10,000 Angolan members.

The United States provides technical assistance and training to, among others, the Investigative Police, the Ministry of the Environment, the Ministry of the Interior, the Attorney General’s Office, and the Institute for Biodiversity and Conservation to combat illegal poaching and wildlife trafficking in Angola; partners with local NGOs to enhance community engagement in combating wildlife crime; and coordinates with critical transboundary land and water resource governance authorities.

THE U.S. AND ANGOLA WORK TOGETHER TO PROMOTE REGIONAL PEACE AND SECURITY

Angola is a key partner to promote peace and stability in central and southern Africa. Earlier this month, President Lourenço hosted a quadripartite summit with his counterparts from Uganda, Rwanda, and the Democratic Republic of the Congo to reduce tensions in the Great Lakes Region.  In 2017, Angola deployed peacekeeping forces to the Southern African Development Community’s stabilization mission in Lesotho.

The U.S. Department of Defense has improved its relationship with Angola’s security institutions since the signing of a 2017 Memorandum of Understanding with the Angolan Ministry of Defense, focusing on improving Angolan maritime security, medical readiness and healthcare management programs, English language training, professional military education, and other technical training.
In July 2019, the United States and Angola signed a Memorandum of Understanding on Security and Public Order that has facilitated law enforcement cooperation, opened new avenues for training, and accelerated information sharing between the U.S. Departments of State and Justice and the Angolan State Security and Information Service (Angola’s Intelligence Service) as well as the Ministry of the Interior, which includes the Angolan National Police.

Since 1995, the United States has contributed more than $134 million for humanitarian demining and munitions destruction, clearing more than 26,000 landmines and 46,900 pieces of unexploded ordnance.

U.S. companies have significant investments in Angola, particularly in the energy sector. GE, ExxonMobil, Halliburton, Baker Hughes, Caterpillar, Chevron, Cummins, TechnipFMC and Tidewater are all represented in the country.
In 2019, a Chevron-led consortium announced plans to invest more than $2 billion to explore new offshore natural gas fields and increase gas production in existing fields, thanks largely to the Angolan government’s economic reforms and efforts to attract investment.
In addition to the U.S. oil and gas companies, U.S. food service firms and franchises have made major investments in Angola, supporting the development of local supply chains.
The Export-Import Bank of the United States (EXIM) signed a Memorandum of Understanding with Angola in April 2019 to explore guarantees of up to $4 billion to support U.S. exports to Angola.
The Government of Angola recognizes the importance of addressing concerns about corruption and enhancing the business environment. Angola’s improved anti-corruption efforts are reflected in its 19-place improvement in its ranking in the 2019 Transparency International Corruption Perceptions Index.

Did you find apk for android? You can find new Free Android Games and apps.
Sharing is caring:
usa, africa, Angola, US Department of State, Special Reports, Pompeo Africa, USA, Angola, Pompeo, US Department of State, Special Reports Comments Off on THE U.S. REAFFIRMS ITS COMMITMENT TO ANGOLA AND THE ANGOLAN PEOPLE AS THEY WORK TO FIGHT CORRUPTION AND PROMOTE DEMOCRACY Print this News