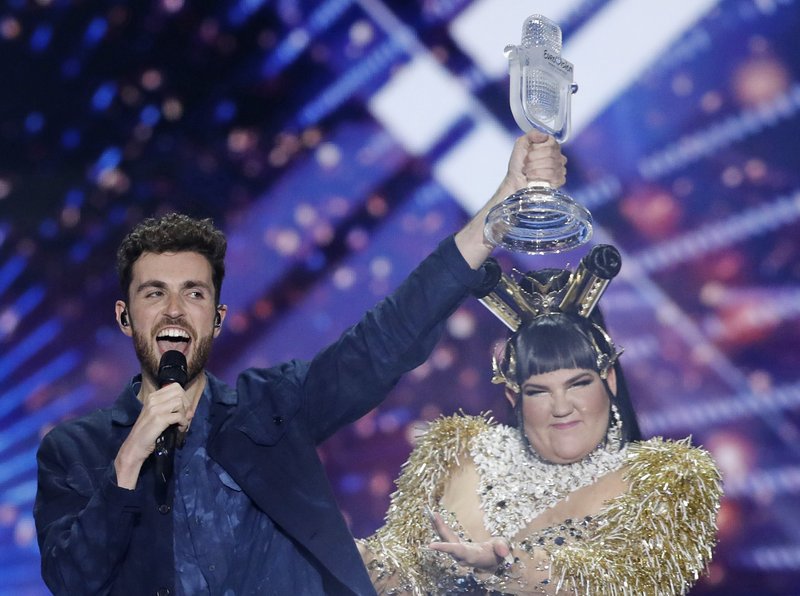 The 25-year-old was tapped as an early front-runner before the Grand Final but was only ranked third after the vote of professional juries from the 41 participating countries, trailing Sweden and North Macedonia. He surged ahead thanks to the fan vote, securing The Netherlands its fifth win ever in the competition. Italy finished second, followed by Russia, Switzerland and Norway.


“This is to dreaming big. This is to music first, always,” Laurence said, as he was handed the trophy from last year’s winner, Israel’s Netta Barzilai.
Some 200 million people around the world were believed to have watched the annual campy contest with 26 nations battling in the Grand Final of the 64th Eurovision.

Madonna was the star attraction, performing her hit staple, “Like a Prayer,” marking 30 years since its release, and a new song “Future” from her forthcoming album “Madame X.” She took the stage after participants wrapped up their performances shortly after midnight when the elaborate voting process got underway across Europe.

To maximize onscreen tension, performers are ranked by a mix of fan votes and professional juries. Spectators could not vote for their own country, but like-minded nations tend to fall into blocs that back their regional favorites, with politics meshing into art. 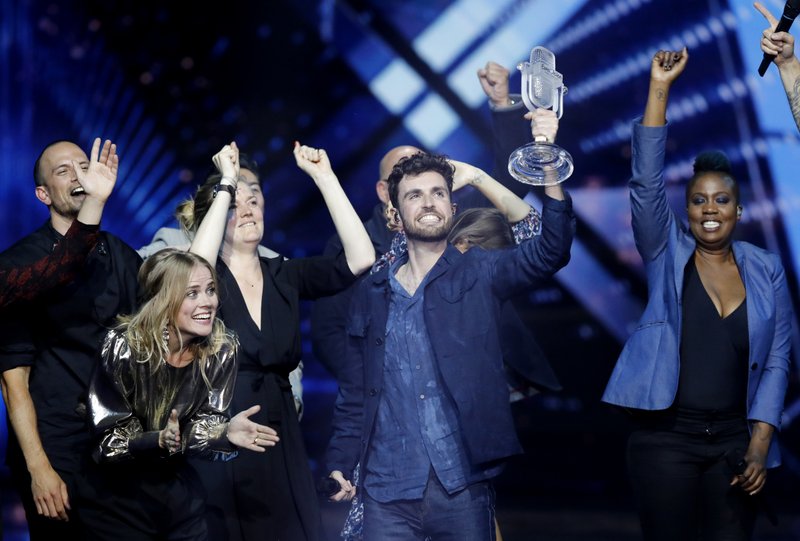 The Eurovision debuted in the wake of World War II to heal a divided continent. Over the years, the earnest show of European unity has ballooned into an over-the-top, gay-friendly spectacle that brings together acts from across the continent, including those with little or no connection to Europe, such as Australia.

Israel earned the right to host the show after Barzilai won last year’s competition with her catchy pop anthem “Toy.”
The ostensibly non-political affair has tried to avoid the Israeli-Palestinian conflict and has largely succeeded, despite swirling threats of controversy.

Calls for performers to boycott the show over Israeli policies toward Palestinians failed to generate much momentum.
A small protest took place outside Tel Aviv’s Expo Center before the show, following another one from musicians in Gaza earlier in the week. A recent round of rocket fire toward Israel from there also failed to temper excitement.
Madonna herself had faced calls from a Palestinian-led campaign to avoid performing at the event in Israel. But the Queen of Pop rejected the boycott motions, saying she will “never stop playing music to suit someone’s political agenda.” Still, two of her embracing dancers sported the flags of Israel and the Palestinians on their backs.

All eyes were on Iceland’s controversial steampunk band Hatari, which had drawn attention for initially saying it would be “absurd” to participate in Israel because of its policies toward the Palestinians. They had vowed to use the Eurovision spotlight to expose the “face of the occupation,” but their live performance of grinding metal rock passed without incident. Only at the end of the broadcast, when their final vote tally was announced, did they whip out a Palestinian flag, to sounds of boos from the audience. 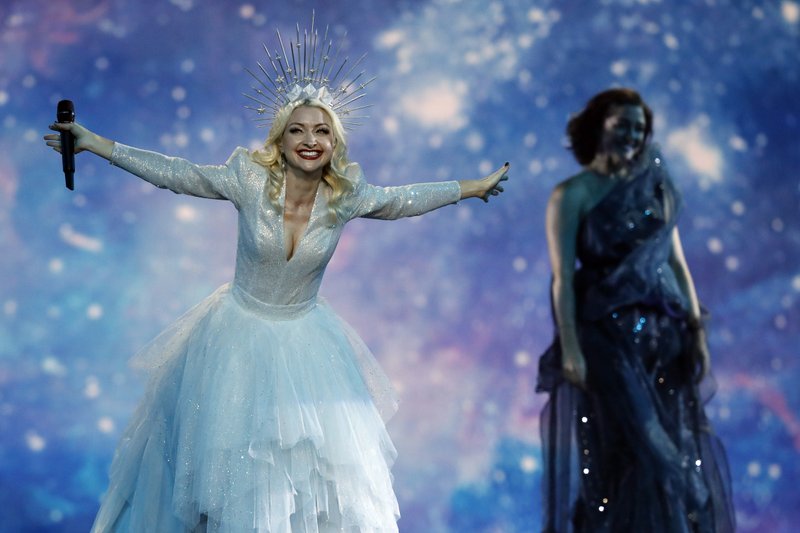 For Israel, the mega event offered a much-anticipated opportunity to put its good face forward and project an image of normalcy to the world. Israel-themed promotional clips featuring each of the participants dancing in various scenic locations across the country streamed before each performance to a TV audience expected to be larger than that of the Super Bowl.


The event itself was being hosted by a quartet of Israeli celebrities, including top model Bar Refaeli. Israel’s own Wonder Woman Gal Gadot also made a cameo video appearance. The Tel Aviv hall was packed with thousands of screaming fans, while tens of thousands gathered to watch the final at the city-sponsored Eurovision village in Tel Aviv and at public screenings elsewhere.

As the reigning champion, Israel swept straight through to the finals — along with the five European countries who most heavily funded the event. The other 20 participants qualified through a pair of semifinal rounds.


Sweden’s soulful “Too Late for Love,” sung by John Lundvik, topped the professional jury vote and seemed to be on its way to carrying forward Sweden’s successful Eurovision track record 45 years after Swedish icons ABBA won with “Waterloo.”

Israel has won the Eurovision four previous times and it has provided the country with some of its cultural touchstones. “Hallelujah” became the country’s unofficial national song after Milk and Honey won the contest for Israel when it hosted the event in the late 1970s, and Dana International became a national hero and global transgender icon when she won with “Diva” in 1998.
Barzilai became a role model for plus-size women after her win last year. She has been unapologetic about her weight, the loud colors she wears, and the funky chicken moves and sounds that have become her trademark. 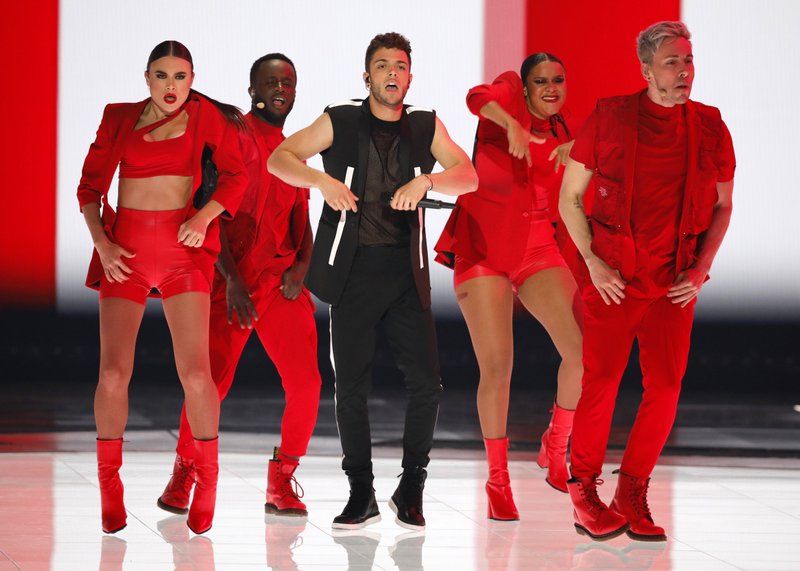 Luca Hanni of Switzerland performs the song ‘She Got Me” during the 2019 Eurovision Song Contest grand final in Tel Aviv, Israel, Saturday, May 18, 2019. (AP Photo/Sebastian Scheiner)

All of Israel’s former winners took part in Saturday’s event with Barzilai and Dana International ceremoniously getting it underway.

Did you find apk for android? You can find new Free Android Games and apps.
Sharing is caring:
Entertainment, Eurovision Eurovision, Entertainment Comments Off on The Netherlands wins Eurovision Song Contest in Tel Aviv Print this News