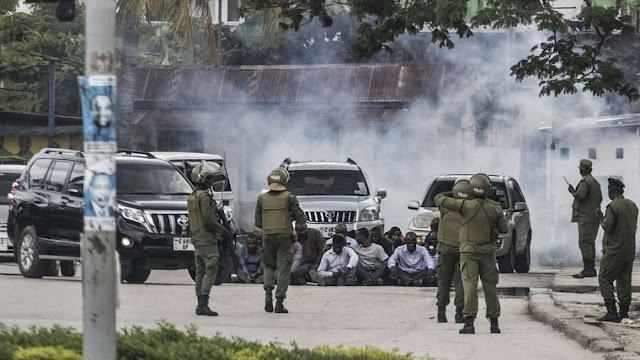 The International Criminal Court (ICC) in The Hague, has confirmed receipt of two formal letters alleging human rights violations by the Tanzania government in the wake of the October 28 election and its aftermath.

The Alliance for Change and Transparency (ACT-Wazalendo), one of the main opposition parties and Maria Sarungi Tsehai, an independent human rights activist, have separately written to court, requesting an official ICC inquiry into their claims of atrocities committed against Tanzanian citizens in opposition and those who are disputing the election’s conduct and results.

In an e-mailed response to a query from The EastAfrican, the ICC prosecutor’s office said although the court was by law ‘’duty-bound’’ to protect the confidentiality of information received on alleged crimes, “in this instance we can confirm we have received the communications as the senders have made that fact public.”

“We analyse material submitted, as appropriate, in accordance with the Rome Statute which established the court and with full independence and impartiality,” the office said.

The first step would be to assess whether the communication concern “matters that are manifestly outside the jurisdiction of the court… As soon as we reach a decision on the appropriate next step, we inform the sender and provide reasons for our decision,” it added.

ACT-Wazalendo leader Zitto Kabwe told the media on November 8 that the party had already submitted evidence to the ICC, Amnesty International and Human Rights Watch.

“We have also written to the Commonwealth and the AU asking them to investigate the October 28 elections and oversee the holding of new elections. We refuse to recognise this election and will continue to protest peacefully for a return of democracy,” Mr Kabwe said.

Ms Tsehai, the director of the independent Kwanza Online TV station and founder of the #ChangeTanzania social movement, tweeted on November 9 that she had also canvassed the ICC, though she was not available for comment on the content of her letter by the time of going to press.

“I used my skills, training as a journalist to fulfil my duty and submit to the ICC evidence of crimes against humanity in Tanzania,” she tweeted.

At least two prominent members of the main opposition Chadema party, one being its presidential candidate Tundu Lissu, have fled Tanzania over the past week, citing persecution by state authorities and threats to their lives, allegations denied by government spokesperson Hassan Abbasi as unsubstantiated.

“Those opposition leaders who are running away on the pretext of having had their lives threatened should tell us who threatened them, when and where. It is those same leaders who just completed 60 days of election campaigning during which they were given non-stop state security and we heard no complaints about that. Now after losing they start complaining about being threatened,” Dr Hassan Abbasi said.

Mr Lissu left for Belgium aboard an Ethiopian Airlines flight on Tuesday after a week holed up at the German embassy in Dar es Salaam, while Chadema’s longtime Arusha Urban legislator Godbless Lema has been granted political asylum in Kenya with his family.

Both cited security threats for leaving. Mr Lema is one of several Chadema opposition heavyweights who lost their parliamentary seats to CCM newcomers. Another Chadema former MP, Lazaro Nyalandu (Singida North), was also reported to have tried to flee to Kenya but was denied exit by immigration officials at the Namanga border post for lacking proper travel documentation.

Dr Abbasi said he was not worried by negative perceptions being created by the action of fleeing opposition leaders.

“The international community is sensible and doesn’t just believe any Tom, Dick and Harry’s claims for asylum on grounds of persecution. But that is their prerogative. Most of them still respect the 1951 Refugee Convention, Article 1 which offers clear definition who deserves to be a refugee,” he added.