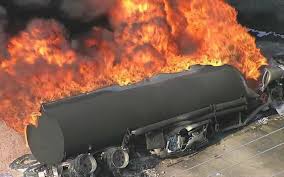 As we mourn with Tanzania over the many lives which were lost in the most recent incineration at a truck / tailer / tanker explosion fire that killed far too many people, we must reflect on safety.

My deepest condolences to Tanzania and we mourn with you.  This is not the first time that people have siphoned fuel from a truck / tanker /trailer carry fuel that was involved in an accident and people were burned to death.

The poverty in our countries is so immense that when people see a truck in an accident and fuel (diesel or petrol /gas) leaking out, they run to collect fuel in plastic containers to sell and make a bit of cash to feed their families.

When oil spills or there is an accident, I assure you that within 1 -5mlns, that fuel truck will explode in flames.  We need to teach our people not to run to collect fuel.  You might be wanting to pay urgent bills but what happens if you get burnt to death?  Even if it is only one person being burnt, that person might have been the sole bread earner to the family.  EVERY DEATH COUNTS.

If you read about how other none shithole countries manage oil spills and tanks / trucks / tails explode and burn people to death, you would not wanna go near such.

I would like to re-share this story of what we experienced in Canada.  A train carrying fuel derailed in Quebec and incinerated an entire town.  https://en.wikipedia.org/wiki/Lac-M%C3%A9gantic_rail_disaster

MARTHA LEAH NANGALAMA
Moncton, Canada
Bududa, Uganda
DISCLOSURE: I am employed by the biggest globally publicly traded oil company in the world. All opinions are mine and do not reflect my employer or any organisation / company I am affiliated with.