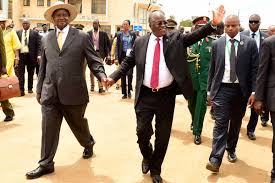 Tanzania: I Will Not Run for Third Term in Office – President John Magufuli

The president has promised his party that he will not exceed his tenure, which likely ends in 2025.
By Sebastiane Ebatamehi, AFRICAN EXPONENT

President John Magufuli has informed his party members and supporters that he does not have the intention of running for presidency after his very-likely second tenure which ends in 2025.

The president also admitted that the job of president was more difficult than he had anticipated.

“Our party CCM is like an industry which produces capable leaders, and as such I will not have any reason to stand for the presidency after the end of my tenure,” Dr John Magufuli told members of the CCM’s National Executive Committee (NEC) and Central Committee in Mwanza yesterday.

Members of the president’s party have urged the president to rule beyond the current constitutional limit of two five-year terms – a move which critics and the opposition have said will lead to anarchy in the East African nation.

Well, the president has withered the storm by stating that he has no intention of staying in office longer than the constitution backed two tenures of five years each.

President John Magufuli has received accolades for masterminding extraordinary socio-economic reforms from local and international bodies, and his decision to respect the country’s constitution will go a long way in earning him more accolades.

“I have no plans of extending my tenure since this will be against the constitution of my party and Tanzania as a country. I should be clear that this position is very tough and sacrifice for one to handle,” he insisted.

Dr Magufuli was highly positive that the ruling party has many potential members who could take up the mantle of leadership just like the way he was chosen for the highest position of the country way back in the year 2015.

“It is through the same means which were used to appoint me as the candidate of CCM presidential candidate in 2015that will be used for my successor who will even be better than me. The Lord has plans for everything. His plans never fail.”

“Being a president is a very daunt- ing task which I did not expect when I was handled the position. Honestly speaking am very tired of this task,” Dr Magufuli stated amid cheers from members of the ruling party.

President Magufuli told members of NEC on the challenges aligned with the presidency and the daunting tasks on addressing them. “I did not know that this position comes with these challenges; for instance when there is an earthquake people will come to you and ask how do we go about this Mr President and when one of our planes is seized abroad it will be the same question.

“However, much with the daunting task ahead of me let me take this opportunity to assure you that this is a very challenging but a task that should be undertaken by someone,” Dr Magufuli assured the party stalwarts in the lakeside city of Mwanza.

Did you find apk for android? You can find new Free Android Games and apps.
Sharing is caring:
magufuli, politics, third term, Videos, Tanzania Videos, Magufuli, Tanzania, Politics Comments Off on Tanzania: I Will Not Run for Third Term – Magufuli Print this News

NTVUganda has added ELEVTION WATCH: Here is why it is important to know your rights as a voter video

NTVUganda has added ON THE GROUND: Returning of NRM nomination forms begins video