Want create site? Find Free WordPress Themes and plugins.
WIKIPEDIA – Swahili, also known as Kiswahili (translation: coast language[7]), is a Bantu language and the first language of the Swahili people.
It is a lingua franca of the African Great Lakes region and other parts of eastern and south-eastern Africa, including Tanzania, Kenya, Uganda, Rwanda, Burundi, Mozambique, and the Democratic Republic of the Congo (DRC).[8] Comorian, spoken in the Comoros Islands is sometimes considered to be a dialect of Swahili, though other authorities consider it a distinct language.[9]

Estimates of the total number of Swahili speakers vary widely, from 50 million to over 100 million.[2] Swahili serves as a national language of four nations: Tanzania, Kenya, Uganda, and the DRC.
[citation needed]

Shikomor, the official language in Comoros and also spoken in Mayotte (Shimaore), is related to Swahili.[10] Swahili is also one of the working languages of the African Union and officially recognised as a lingua franca of the East African Community.[11]
A significant fraction of Swahili vocabulary is derived from Arabic [12] and Sanskrit [13]through contact with Arabic-speaking Muslim inhabitants and Indian merchants of the Swahili Coast.[14] 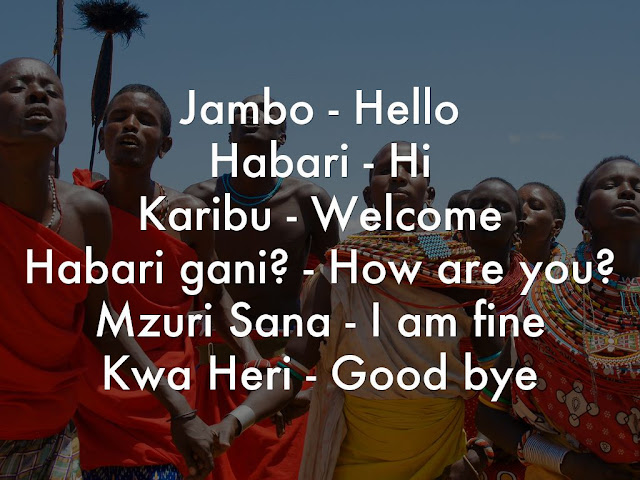 Classification
Swahili is a Bantu language of the Sabaki branch.[15] In Guthrie’s geographic classification, Swahili is in Bantu zone G, whereas the other Sabaki languages are in zone E70, commonly under the name Nyika. Local folk-theories of the language have often considered Swahili to be a mixed language because of its many loan words from Arabic, and the fact that Swahili people have historically been Muslims.However, historical linguists do not consider the Arabic influence on Swahili to be significant enough to classify it as a mixed language, since Arabic influence is limited to lexical items, most of which have only been borrowed after 1500, while the grammatical and syntactic structure of the language is typically Bantu.[16][17] 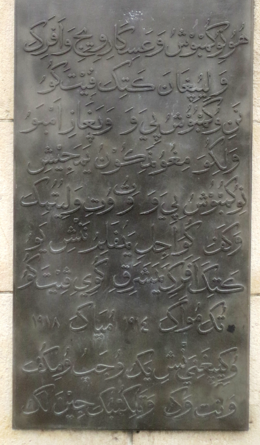 Its old name was Kingozi, but as traders came from Arabic, Persian, and Indian countries, their vocabulary intermingled with the language. It was originally written in Arabic script.[18]

The earliest known documents written in Swahili are letters written in Kilwa in 1711 in the Arabic script that were sent to the Portuguese of Mozambique and their local allies. The original letters are preserved in the Historical Archives of Goa, India.[19]

Although originally written with the Arabic script, Swahili is now written in a Latin alphabet introduced by Christian missionariesand colonial administrators. The text shown here is the Catholic version of the Lord’s Prayer.[20]

Christian missionaries were the ones that spread the Latin alphabet to the Swahili people. They used it to communicate with the natives, spreading it further.

Since Swahili was the language of commerce in East Africa, the colonial administrators wanted to standardize it.[21] In June 1928, an interterritorial conference attended by representatives of Kenya, Tanganyika, Uganda, and Zanzibar took place in Mombasa. The Zanzibar dialect was chosen as standard Swahili for those areas,[7] and the standard orthography for Swahili was adopted.[22]

Swahili has become a second language spoken by tens of millions in three African Great Lakes countries (Tanzania, Kenya, and the DRC) where it is an official or national language. It is the only African language in the African Union. In 2016, Swahili was made a compulsory subject in all Kenyan schools.[23] Swahili and closely related languages are spoken by relatively small numbers of people in Burundi, the Comoros, Rwanda, Malawi, Mozambique, and northern Zambia.[24] The language was still understood in the southern ports of the Red Sea and along the coasts of southern Arabia and the Persian Gulf in the 20th century.[25][26]

Some 80 percent of approximately 49 million Tanzanians speak Swahili in addition to their first languages.[27] The five eastern provinces of the DRC are Swahili-speaking. Nearly half the 66 million Congolese reportedly speak it.[28] Swahili speakers may number 120 to 150 million in total.[29]
========