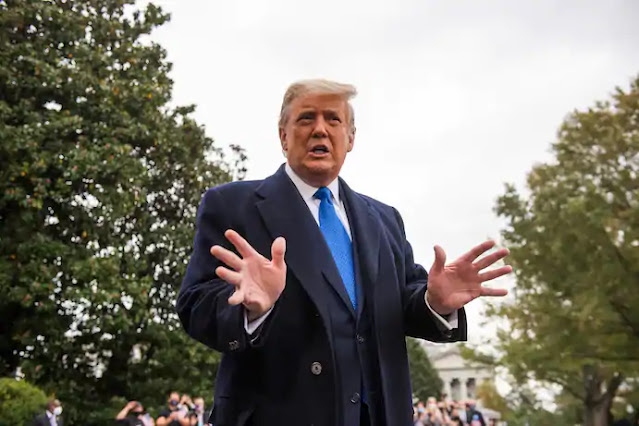 A sudden drop in the stock market in recent days threatens to muddle President Trump’s campaign message about the U.S. economic recovery, just days before the Nov. 3 election.

The Dow Jones industrial average fell 943 points Wednesday and is down nearly 9 percent since Sept. 2.

The sell-off began two weeks ago but intensified Monday. It has been triggered by a surge in coronavirus cases and the fact that the White House and Democrats are at an impasse over relief talks.

Trump in recent days has touted the stock market as central to his 2020 reelection bid, frequently pointing to Americans’ 401(k) accounts and investment portfolios. The stock market’s sharp decline clouds this characterization. The president has insisted that the stock market and the broader economy will nosedive if he loses to Joe Biden, at one point claiming that the Democratic presidential nominee would cause a “super depression.”

But the stock market rose steadily during the Obama administration when Biden was vice president, and the new sell-off appears more closely tied to concerns about the economic impact of the coronavirus than on the upcoming election. Roughly 500,000 people in the United States have tested positive for the coronavirus in just the past week, a record number, and Germany and France have announced new lockdowns to try to control the spread.

The sharp market drop this week also complicates the president’s boasts of overseeing a rapid economic recovery. Trump has begun to tout a report due Thursday morning that is expected to show the economy grew strongly from July through September, but the data is still expected to show that the U.S. economy is much weaker than before the coronavirus outbreak began in the United States in February. In addition, several prominent economists say the recovery has been losing steam, and some investors fear that there could be a prolonged downturn in the stock market, given that the virus is raging in much of the country and that unemployment levels remain relatively high.

The stock market dip comes amid wider signs of potential economic strains at the end of the president’s first term.

Multiple federal relief measures approved by Congress expired months ago, depriving millions of small businesses and jobless Americans of emergency financial lifelines. Treasury Secretary Steven Mnuchin and House Speaker Nancy Pelosi (D-Calif.) are formally continuing talks, but another stimulus package is not expected to be passed before the election.

Pelosi on Wednesday said she was hopeful the Wall Street dip would compel the president to quickly pursue an economic relief deal.

The spread of the pandemic threatens to wreak further havoc on the economic recovery. The nation is experiencing a coronavirus outbreak more widespread than occurred in the summer or spring, with hospitalizations increasing in 38 states and deaths beginning to tick up. The rise in covid cases raises the prospect of another wave of lockdowns that can cripple the economy. El Paso and Newark have introduced curfews to curb the surges in coronavirus cases in their jurisdictions.

The federal jobless rate has come down substantially, to 7.9 percent. White House officials frequently point out that several key sectors — including housing, automobiles and manufacturing — show signs of rapid growth that could power the nation’s economic recovery. Analysts expect that Thursday’s report could show a more than 25 percent quarterly increase in the U.S. gross domestic product after the economy contracted sharply in the spring.

Joseph LaVorgna, the chief economist at the White House National Economic Council, said after Monday’s dip that the stock market decline was unremarkable and that the underlying American economy remained fundamentally strong. Weekly unemployment claims have begun coming down, and retail sales are above their prior peak, LaVorgna said.

“I don’t think this is anything fundamentally amiss with the economy,” LaVorgna said in an interview. “The economy looks pretty darn healthy — and that’s what’s going to eventually steady stocks. I’m not worried. I think the markets are very much sending a message of growth and rebound.”

On Wednesday, LaVorgna pinned the stock market decline on an increase in coronavirus cases in Europe and the impact that that trend may have on the global economy.

“Europe is worse, and that spillover is happening, but the difference is, in the U.S., is the data looks a lot better than it has in Europe. We’re not going to lock down like they are in Europe,” LaVorgna said. “Europe is leading global stock markets lower.”

Still, even some of the president’s allies acknowledge the challenge posed by the market decline, arguing that Trump must continue to blame Pelosi for the absence of a stimulus agreement.

“It’s a big, big decline. … It’s very ugly,” said Stephen Moore, an outside economic adviser to the White House. “Trump has to keep saying ‘Pelosi blocked the plan because she wanted the blue state bailout.’ ”

The White House and Republican posturing over the stimulus talks kept changing, however. Numerous Senate Republicans said they would not even support a $1 trillion spending bill, but Trump said he would support something even bigger than the $2.2 trillion package Pelosi had advocated. And Trump kept trying to cancel and then un-cancel the negotiations, sometimes multiple times in a week.

The market has fluctuated wildly throughout the last year of Trump’s first term. The Dow soared above 29,000 for the first time in history in January and February, before cratering in March as the coronavirus and a wave of lockdowns slammed the country. March was the worst period for the market since the 2008 financial crisis, but stocks steadily recovered since then because of the rebounding economy and the extraordinary government support authorized by the Federal Reserve and Congress. The Dow again eclipsed 29,000 in September and had held largely steady before the current sell-off, which has sent it below 27,000.

Wall Street has had mixed assessments of which presidential candidate would be best for growth. Analysts at JPMorgan Chase said in a report Monday that an “orderly” Trump victory represents “the most favorable outcome” for the market. The stock market is still up roughly 40 percent since Trump was elected in 2016. Historically, the market typically rises by about 7 percent every year, meaning that Trump’s term in office is better than the median president’s but not spectacularly so.

Moody’s Analytics estimated stronger GDP growth under Biden’s economic plans than under Trump’s. Other financial analysts have pointed out that Trump’s term in office has been punctuated by erratic swings in the market: It dropped dramatically during the 2018 government showdown and again when trade tensions flared in the summer of 2019. About half of all Americans own no stocks, including retirement accounts such as 401(k) plans.

“We got a big gain, but, boy, were we subjected to extreme volatility to get it, and not everyone got to enjoy the ride up,” said Chris Rupkey, the chief financial economist at MUFG Union Bank.

Ed Yardeni, the president and chief investment strategist at Yardeni Research, said Monday that the early sell-off may just be “garden variety volatility” rather than the onset of a new crisis. Manufacturing indexes last week, Yardeni pointed out, still suggested a “V-shape” recovery and wider strength in the broader U.S. economy. It is still possible for stocks to make a healthy recovery before Election Day.

“It’s not a correction yet. This is just more of the same,” Yardeni said. “The market could be up big tomorrow. Or it could be back to worrying about covid.”