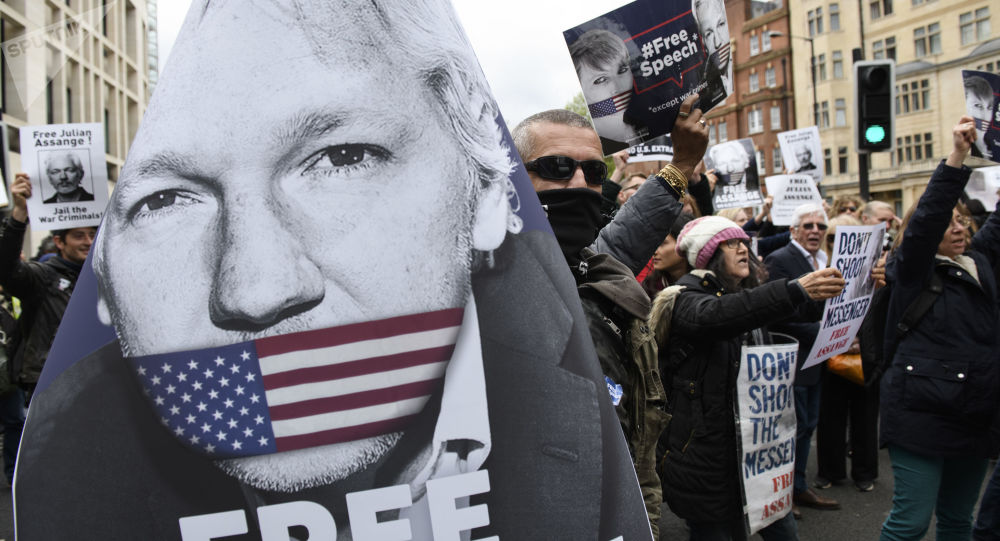 
The WikiLeaks co-founder has repeatedly insisted that his private life and conversations in the Ecuadorian Embassy in London were invaded. His suspicions have now been backed up by Spanish prosecutors. As reports by German and US outlets suggest, Assange’s celebrity supporters and journalists were also affected.

According to the materials presented in Spain’s National Court amid a case against the Spanish security firm and seen by The New York Times and the Spanish newspaper El País, the firm intercepted conversations of the WikiLeaks co-founder, his celebrity visitors, lawyers, and doctors.

The plaintiffs are insisting that the firm eavesdropped on Assange for the CIA. However, the agency’s spokesperson has declined to comment on these allegations. While the publisher, who is currently in a London prison, is set to testify remotely in the case on 20 December, his legal team is also planning to use this evidence in an extradition case by the British government and block his deportation to the US. According to them, the newly-revealed allegations prove that he would not receive a fair trial in the US, where he faces a hefty prison sentence over leaking classified documents on the American military.

The suspicions arose after images from the embassy had been put up for sale in Spain this spring. It is alleged that the Spanish firm passed on audio and video recordings of Assange’s meetings until 2018.

According to them, hidden microphones were installed and electronic devices were disassembled. Besides this, recording equipment was reportedly placed in the restrooms where Assange sometimes talked to his guests to guard his privacy.

The security firm refutes the allegations, stressing that it acted only on behalf of the Ecuadorian government. Its founder David Morales, indicted in October, denies any wrongdoing as well. Nevertheless, he has been charged with privacy violation, bribery, and money laundering and arrested. Following house searches in Spain, the authorities also confiscated disks, weapons, and cash.

Julian Assange is currently serving a jail term in the UK for skipping bail in 2012, when he fled to the Ecuadorian Embassy in London fearing extradition to Sweden and then to the United States.

On 25 November, over 60 doctors from Europe, the United States, Australia, and Sri Lanka wrote a letter to UK Home Secretary Priti Patel saying that Assange’s health was deteriorating rapidly and he “could die in prison”.

They insisted his condition required independent assessment after his seven year ordeal at the embassy and half a year behind bars.

In prison, he is awaiting an extradition hearing, which is set for February next year. In October, a UK judge rejected Assange’s pleas to delay it for three months to allow more time to investigate his case.


Ex-Australian Prime Minister Warns Against Extraditing Julian Assange to US
Assange was arrested by British police at the request of US authorities after Ecuador’s new president, Lenin Moreno, in a bid to forge closer relations with the US and UK, revoked his asylum status, granted in 2012.

While Swedish prosecutors who wanted Assange on rape allegations subsequently dropped their case last week, he is sought on multiple counts of espionage carrying a total of 175 years in prison in the US. The hunt for him has gone on since his WikiLeaks project disclosed classified documents relating to the wars in Iraq and Afghanistan that shed light on how the US military covered up the killing of civilians.

Did you find apk for android? You can find new Free Android Games and apps.
Sharing is caring:
world news, Assange Assange, World News Comments Off on Spanish Security Firm Spied on Julian Assange at Ecuadorian Embassy for CIA – Report Print this News

Lawyer: Assange was offered US pardon if he cleared Russia