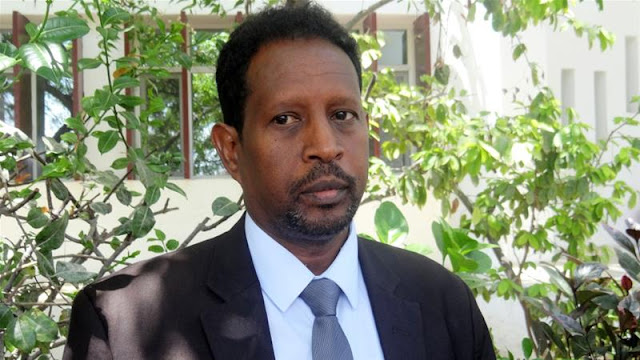 Mayor Osman was being treated in Qatar after last month’s suicide attack inside his office in Somalia’s capital.

Osman was initially wounded in a July 24 suicide attack inside his office in the Somali capital [File: Feisal Omar/Reuters]

The mayor of Somalia’s capital Mogadishu has died of wounds sustained in a suicide attackinside his office last month.

Mayor Abdirahman Abdi Omar Osman died on Thursday while doctors were treating his wounds at a hospital in Qatar’s capital Doha where he was brought to after the attack, a spokesperson for Somalia’s presidency said.

Six people were killed and Osman, also referred to as Engineer Yarisow, was wounded in the July 24 attack.

The Horn of Africa country’s information minister, Mohamed Abdi Hayir, said after the attack that the city’s district commissioners were among the dead.

Osman and several others badly injured in the attack were airlifted to Qatar for treatment.

Somalia’s President Mohamed Abdullahi Mohamed praised Abdirahman, who worked as a London councillor before returning to his war-torn homeland, as a public servant dedicated to rebuilding the country.

“He had sacrificed his life and time serving the Somali public,” the president said in a statement.

“He will be remembered for his dedication to serving the people and the country, as well as working hard to develop Mogadishu while taking a clear stand in the fight against terrorism.”

Abdirahman’s son, Mohamed A Omar, offered a moving tribute to his late father.

“Today the people of Mogadishu lose their mayor; but I lost my father,” he posted on Twitter, accompanied by a picture of his father in a sky-blue suit attending his son’s graduation.

“May Allah grant him the highest rank of paradise.”

The UN’s special envoy also expressed his sorrow over the loss of the former mayor.

“Our deepest condolences and thoughts are with the family, friends and colleagues of Engineer Yarisow, who was long dedicated to helping his country on its path to peace and stability, and meeting the needs of Mogadishu’s most vulnerable,” Swan said in a statement.

“His life reflected a deep commitment to Somalia and his loss is felt by all of us,” Swan added. “His work must be continued, and those responsible must be brought to justice.”

Meanwhile, Abdinur Mohamed Ahmed, a spokesperson for the president, said the mayor’s death would “unite us” in the fight against the armed group.

Al-Shabab has been fighting sine 2007 to topple Somalia’s fragile government, which is backed by a 20,000-strong African Union force, AMISOM, and the UN.

Although the armed group was chased out of Mogadishu in 2011, the capital is still hit regularly by its fighters.

The assault on the mayor’s office comes after two other attacks in July.

At least 17 people were killed and dozens wounded when a bomb went off outside a hotel near the international airport in Mogadishu on July 22. Al-Shabab claimed responsibility for the attack.

On July 13, 26 people – including prominent Somali-Canadian journalist Hodan Naleyah – were killed and more than 50 others were wounded when al-Shabab attacked a hotel in the Somali city of Kismayo.

Did you find apk for android? You can find new Free Android Games and apps.
Sharing is caring:
somalia Somalia Comments Off on SOMALIA: Mogadishu Mayor Omar Osman dies in hospital after suicide attack Print this News