SOCCER: Uganda Cranes have one of the best coaches for #Afcon 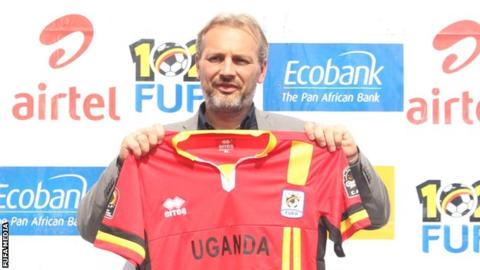 AFCON: Uganda stands a very high chance at the Africa soccer cup. Desabre is from France. I once read a tweet on Twitter about Desabre  misspelling Uganda as Ouganda.  I thought my friend was a total idiot. Everyone knows that Uganda is written as Ouganda by them French people.

Here is some back ground information about our Uganda national team at Afcon coach. Sebastien is really good at his job. So was Micho but no one took notice till he quit.

MLN
====
Sébastien Desabre (born 2 August 1976) is a French football coach and former player who has been manager of the Ugandan national team, The Cranes, since 28 December 2017.[1] He replaced Milutin Sredojevic (‘Micho’), from Serbia, who left in July 2017 to become coach of the Orlando Pirates Football Club in South Africa.[1]

Career
Desabre was born on 2 August 1976 in Valence, France.[1] Immediately prior to his current assignment he was the head coach of Ismaily football club in the Egyptian Premier League. His other past coaching assignments include ESC Rocheville in France, ASEC Mimosas in Ivory Coast, CS Garoua in Cameroon and ES Tunis in Tunisia.[1] He has also coached Clube Recreativo Desportivo Libolo in Angola, Dubai Club in the United Arab Emirates, JS Saoura in Algeria and Wydad Athletic Club in Morocco.[1][2]

In December 2017, prior to the January–February 2018 African Nations Championship competition, he signed a three-year contract with the Federation of Uganda Football Associations at a gross monthly salary of US$25,000.[3][4]. On 17th November 2018, Desabre’s Cranes qualified for the 2019 African Cup of Nations after defeating Cape Verde in Kampala.[5] In November 2018, the Uganda national team was nominated with five others for the CAF Men’s national team of the year award 2018.[6]

Uganda Cranes coach Milutin ‘Micho’ has asked the Football Federation to pay up his debts (over UGX200 million) or he quits the job.

Speaking to Uganda Radio Network [URN] on Sunday, the Serbian made it clear that he cannot continue to suffer like this when his employers are failing to honour the contract.

“I have not been paid wages for four months now and I am also demanding over UGX72 million (US$20,000) in bonuses,” said a bitter Sredojevic.

On Saturday the coach guided Uganda to qualification for the final phase of the 2018 Total Africa Nations Championship (CHAN) after a 5-1 win over South Sudan at the Philip Omondi Stadium in Kampala.

Sredojevic is paid slightly over UGX43 million (US$12,000) every month besides the other expenses paid for by the FA.

But the tactician said after the game that he will make a decision on whether to leave or stay in the next 48 hours.

“This has been torture working as coach for the Uganda Cranes because they are always in breach of the contract and yet the players think I am even paid in advance because I work so hard,” he added.

Sredojevic who broke the jinx by guiding Uganda to the 2017 Total Africa Cup of Nations (Afcon) after 38-years of waiting said that he wants peace with Uganda and that should be made by paying all his debts.

“I am ready to remove one shirt as coach of Uganda and leave for another job, but I will remain big supporter because it’s in Uganda where I launched coaching in Africa with Sports Club Villa in 2001,” he explained.