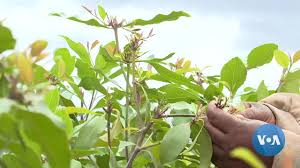 EMBU, KENYA (VOA News) – More small scale farmers in central Kenya have switched from growing food crops to planting and harvesting an herbal stimulant known locally as “Muguka” – a variety of the drug, Khat. The farmers say they now make almost three times as much from growing the drug instead of food crops, but the local county government wants farmers to create a balance between producing “Muguka” and food. Rael Ombuor has more from Embu, Kenya.

It is the crop that puts food on the table and will provide, she hopes, the money to send her 18-year old son to college next year.

She used to farm maize, but it was not profitable.

Wilkister cleared her maize and planted Muguka in two of her three acre farm. She now makes on average 20,000 Kenyan shillings, or about $190 (U.S. dollars) a week.

Muguka is a variety of Khat that is a green and bushy. It is a stimulant that produces a mild high when chewed. The crop is fast growing and does well in the semi-arid lowlands of Embu county, making it less vulnerable to erratic weather conditions.

Farmers with a lot of land used to grow Muguka. But now small scale farmers are cashing in on the trade.

“They are doing that because it is providing some employment, direct employment to the people that are in Mbeere region and also apart from employment it is giving easy cash,” says John Mukundi, the Chief executive officer of the Agriculture & Cooperatives docket in Embu County. “People can get the money instantly when they sell their produce.”

Embu’s county government says there are now 65,000 farmers growing the crop in the region, making Muguka one of the highest income earners for the region apart from coffee and tea.

But the county government is urging farmers to create a balance between growing the herbal stimulant and food crops.

“We are giving some free supply of seeds so that we can encourage those farmers to also plant some food crops that will enhance food security and nutrition. We are also encouraging them to take advantage of the fertilizer subsidies that we are giving them,” he says.

Small scale Muguka farmers mainly sell the stimulant in local markets. But the crop is also transported to various parts of the country, and is exported to Somalia.

Farmers in the lowlands of Embu say despite efforts to boost food crops, the financial benefits of Muguka outweigh growing food – at least for now.