SENEGAL: President throws opponent into jail, bars him from running in elections 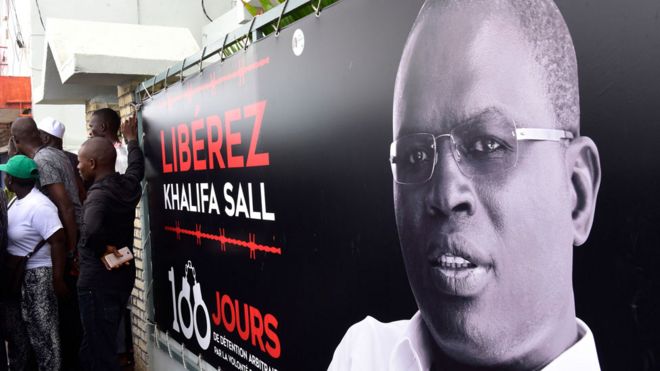 BBC – One of Senegal’s most popular politicians has been jailed on charges of fraud which his supporters say are politically motivated.Khalifa Sall, mayor of the capital Dakar, was sentenced to five years for embezzling $3.4m (£2.4m).

His conviction bars him from next year’s elections, when he had been expected to present a strong challenge to President Macky Sall – no relation.

Senegal is one of the most stable democracies in West Africa.

It is the only country on mainland West Africa never to have had a military coup.

It has seen two peaceful transfers of power following elections, most recently in 2012, when Macky Sall became president.

Find out more about SenegalKhalifa Sall, 62, was arrested last year and successfully stood for parliament even though he was in detention at the time.His parliamentary immunity was lifted so he could stand trial.
‘More popular in prison’The court heard that he had used fake receipts for rice and millet, and diverted the money for “political purposes”, reports the AFP news agency.

“This decision is meant to prevent Khalifa Sall from putting his name forward as presidential candidate.”

His lawyers have told the media they intend to appeal. However, they are unable to launch the appeal process immediately as Senegal’s court clerks are currently on strike.

The BBC’s Alex Duval Smith in Dakar says that, whether or not there has been political interference in the trial, it appears to have boosted Khalifa Sall’s popularity.

Ever since his arrest, and during last October’s parliamentary election process, the mayor’s supporters have painted him as a victim of an elitist and skewed justice system, she says, adding that he is more popular in his prison cell than he was in city hall chambers.

Did you find apk for android? You can find new Free Android Games and apps.
Sharing is caring:
dictator, democracy, africa, Ecowas, jailed for fraud, mayor of Dakar, Senegal's Khalifa Sall World News Comments Off on SENEGAL: President throws opponent into jail, bars him from running in elections Print this News