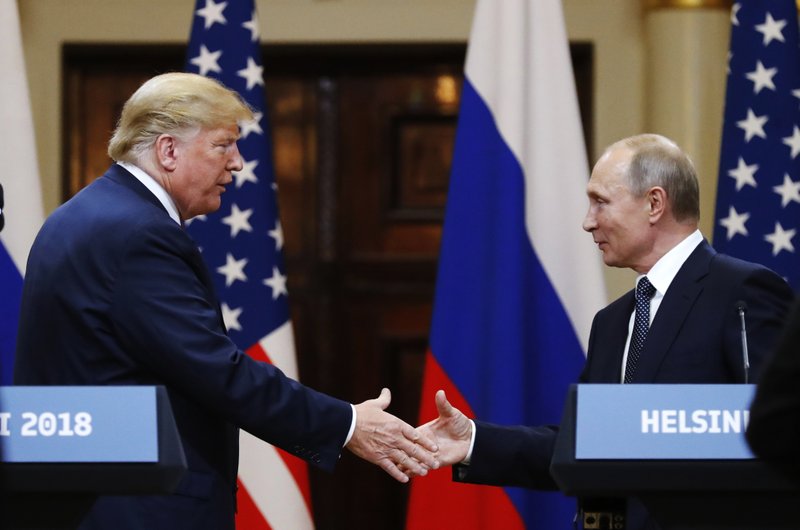 Senate Majority Leader Mitch McConnell is standing behind the U.S. intelligence community’s conclusion that the Russians interfered in the 2016 elections — despite President Donald Trump’s latest comments.

The Kentucky Republican told reporters at the Capitol on Monday: “The Russians are not our friends.” And he said he “entirely” agrees with intelligence agencies’ assessment that Russians meddled in the election.

McConnell spoke several hours after Trump stood beside Russian President Vladimir Putin at a news conference in Helsinki and said he didn’t see “any reason” why Russia would have meddled. Trump said Putin was “extremely strong and powerful” in denying Russian involvement.

McConnell did not respond when asked if he was disappointed in Trump’s remarks.

The director of national intelligence is restating the U.S. intelligence community’s assessment that Russia meddled in the 2016 election following a press conference where President Donald Trump openly questioned that conclusion.

Dan Coats said Monday that the U.S. intelligence community’s role is to provide “the best information and fact-based assessments possible for the president and policymakers.”

He added: “We have been clear in our assessments of Russian meddling in the 2016 election and their ongoing, pervasive efforts to undermine our democracy, and we will continue to provide unvarnished and objective intelligence in support of our national security.”

After meeting with Russian President Vladimir Putin in Helsinki on Monday, Trump said that he had “great confidence” in U.S. intelligence but that Putin’s denial of election meddling was “extremely strong and powerful.”

Sen. John McCain calls President Donald Trump’s press conference “one of the most disgraceful performances by an American president in memory.”

The Arizona Republican says the summit with Russian President Vladimir Putin in Helsinki was “a tragic mistake.”

The senator says Trump proved not only unable, “but unwilling to stand up to Putin.” And he said Trump and Putin “seemed to be speaking from the same script” as Trump made a “conscious choice to defend a tyrant.”

McCain, who has been away from the Senate as he battles brain cancer, said the damage inflicted by Trump’s “naiveté, egotism, false equivalence, and sympathy for autocrats is difficult to calculate.”

Sen. Bob Corker of Tennessee, chairman of the Senate Foreign Relations Committee, says Trump’s performance at a summit with Putin was not “a good moment for our country. This was a very good day for President Putin.”

Corker said Trump seems to care more “about how a leader treats him personally” than pushing back against Russia’s meddling in the election.

The news conference, televised on the nation’s biggest broadcast and cable news networks, drew strong reaction from commentators after it was over. But Cooper’s initial assessment, made right after it ended, was among the most startling because he was anchoring the network’s news coverage.

Cooper called Trump’s performance “one of the most disgraceful performances by an American president at a summit in front of a Russian leader, certainly that I’ve ever seen.”

The CNN anchor said Trump was like “Rain Man” in the way he returns to the subject of Hillary Clinton’s email server.

House Speaker Paul Ryan says there’s “no question” that Russia interfered in the 2016 presidential election and continues to try undermine democracy in the United States and around the world.

The Wisconsin Republican says the American intelligence community and the House Intelligence Committee agree that Russia interfered in the election. He adds: “The president must appreciate that Russia is not our ally.” Ryan says Russia “remains hostile to our most basic values and ideals.”

The United States must be focused on holding Russia accountable and putting an end to its vile attacks on democracy.”

Ryan’s comments came after Trump said at a summit with Russian President Vladimir Putin that he sees no reason why Russia would interfere in the U.S. election.

The Kremlin has denied any state action in the election.

The Senate’s top Democrat is accusing President Donald Trump of a “shameful performance” at a news conference alongside Russian President Vladimir Putin. The leading House Democrat calls it “a sad day for America.”

The New York Democrat says it is “thoughtless, dangerous and weak” for Trump to take Putin’s word that Russia didn’t meddle in the 2016 U.S. elections. U.S. intelligence agencies have concluded Russia did interfere, but the Kremlin has denied state involvement.

House Minority Leader Nancy Pelosi says Trump’s “weakness in front of Putin” proves the Russians have damaging information on him.

Standing beside Putin in Helsinki, Finland, Trump declined to criticize Russia for meddling and said he doesn’t see why Russia would have done that.

Key members of Congress, including some Republicans, are criticizing President Donald Trump’s performance at a press conference with Russian President Vladimir Putin as “bizarre,” ″shameful” and a “missed opportunity” to stand up to Russia.

Sen. Jeff Flake, R-Ariz., tweeted, “This is shameful.” Sen. Ben Sasse, R-Neb., called it “bizarre” and “flat-out wrong” for Trump to suggest that both countries are to blame for their deteriorated relationship.

Top Democrat Sen. Chuck Schumer of New York, says never in the history of the country has a U.S. president supported an adversary the way Trump supported Putin.

Did you find apk for android? You can find new Free Android Games and apps.
Sharing is caring:
world news World News Comments Off on RUSSIA: The Latest: McConnell backs finding of Russian interference Print this News