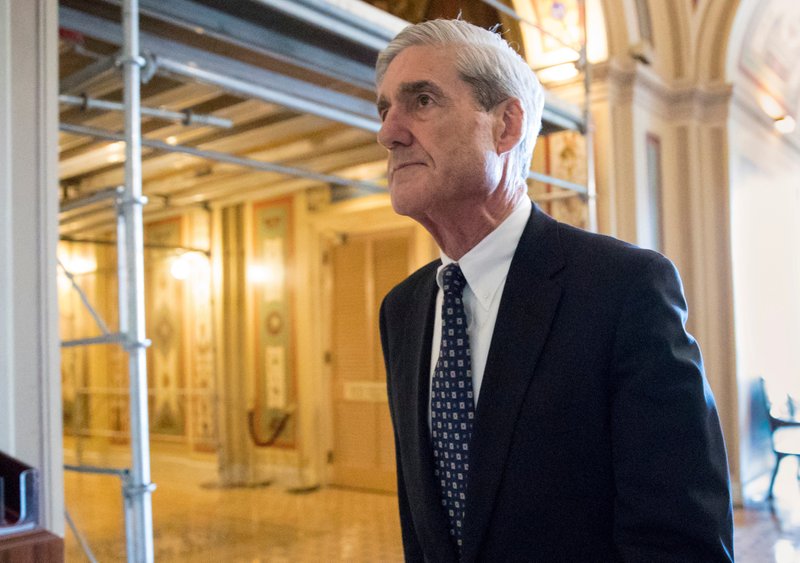 Trump is a ‘subject’ of investigation. What does that mean?

WASHINGTON (AP) — Special counsel Robert Mueller’s team currently considers President Donald Trump to be a subject — not a criminal target— in the wide-ranging investigation into Russian election interference and possible coordination with Trump associates.The designation, first reported by The Washington Post and confirmed by The Associated Press , has raised questions about what legal threat Trump personally faces from the special counsel and whether it has any impact on his decision to sit for an interview with prosecutors.

Q: WHAT IS A ‘SUBJECT’ OF AN INVESTIGATION?

A: The answer is complicated. The Justice Department typically places people involved in investigations in three categories: witnesses, subjects or targets.

Witnesses are people who have observed events of interest to an investigation but are not suspected of a crime. Targets are people the government is gathering evidence against to support a criminal prosecution.

Subjects fall in between. In Trump’s case, being a subject might suggest Mueller’s team believes he is more pivotal than a mere witness might be.

“A subject means we’re still looking at you,” former federal prosecutor Sharon McCarthy said. “You’re a person of interest in this investigation.”

Q: IS TRUMP IN THE CLEAR?

A: The short answer is no.

The subject designation suggests Mueller is still probing Trump’s actions. And designations can change. Plenty of people who have begun as subjects in federal investigations end up facing charges.

Still, it’s unclear that Mueller is interested in pursuing charges against Trump — or would even be able to if he wanted.

It is not known if Mueller’s office has concluded that there is insufficient evidence to consider Trump a target. It’s also possible that prosecutors agree they’re bound by a Justice Department legal opinion that contends that a sitting president cannot be indicted.
__

A: In the past, the Justice Department has said no. But only Mueller and his team know whether they’ll test that opinion, and they’re not talking.

Mueller has been presenting evidence before a grand jury in Washington but so far, witnesses with the most direct information about Trump’s actions in the White House have spoken privately with prosecutors . That could be an indication that their statements are being used to support a report rather than criminal charges.

The Washington Post reported that Mueller is compiling a report addressing whether Trump obstructed justice. Mueller is required to compile a report explaining his prosecution or declination decision at the conclusion of his investigation. The report would go to Deputy Attorney General Rod Rosenstein, who could decide to make it public or turn it over to Congress for possible impeachment proceedings.
__

Q: WHY DOES MUELLER WANT TO INTERVIEW TRUMP?

A: Mueller’s team has said it wants to hear from the president to understand his intent and his thinking during several key episodes during the early part of his administration.

Those include the firings of former FBI Director James Comey and former National Security Adviser Michael Flynnas well as conversations Trump had with Comey in which, the former FBI director has said , the president encouraged him to end an active investigation into Flynn.

All of the topics currently known appear to be aimed at determining whether the president obstructed justice. The Post also reported that Mueller has indicated that interviewing Trump was necessary to complete his report on possible obstruction of justice.
__

Q: WHAT ARE THE ARGUMENTS IN FAVOR OF TRUMP BEING QUESTIONED?

A: The president has proclaimed his innocence and says he has nothing to hide, so submitting to an interview might be the easiest way to prove that to the American public.

It could also be a major step toward concluding the investigation, since any refusal to speak could set off a long legal fight that might theoretically involve courts and grand jury subpoenas.

Trump might enjoy the experience, too. After months of headlines about what witnesses have told Mueller’s team, Trump would have an opportunity to tell his own side of the story and try to correct others’ recollections.

It’s hard to imagine a sitting president refusing an interview with investigators. It might make sense from a criminal defense perspective, but the appearance of ducking questions wouldn’t be pretty.

And he wouldn’t be the first to speak either. Bill Clinton, for instance, appeared in 1998 via closed-circuit television before a grand jury to discuss his relationship with Monica Lewinsky.
__

Q: HOW ABOUT THE ARGUMENTS AGAINST TRUMP GIVING AN INTERVIEW?

A: There are many. For one thing, he doesn’t have to. Absent a grand jury subpoena, there’s almost certainly no way to compel Trump to talk if he doesn’t want to or if his lawyers won’t let him.

Besides, the prosecutions so far in Mueller’s case make clear that he takes false statements seriously and treats them as criminal offenses. Trump’s statements as president have often stretched the truth, and the last thing his lawyers want is for him to be in a situation where he might make a misstatement or find his words contradicted by documents.

Even if a misstatement weren’t intentional, there likely would be questions about specific dates and memories that the president might not recall or might answer incorrectly. But the president has spent considerable time testifying under oath in civil cases for years and has shown deftness in deflecting tough questions and explaining away apparent inconsistencies.

Defense lawyers also could argue there’s no basis for a president to be questioned about constitutionally protected activities, such as his decision to fire Comey.