Rockefeller: Making of a Billionaire

This post was written by Business Reference librarian Natalie Burclaff. LIBRARY OF CONGRESS

The annual Forbes 400 list of the wealthiest Americans is released every fall. Ranking highest are familiar names like Bill Gates, Warren Buffett, Mark Zuckerberg, and Jeff Bezos who tops the list with a net worth of $114 billion. But a century before these tech and financial giants, there was John D. Rockefeller. He accumulated so much wealth that he could still make the list if he were alive today. 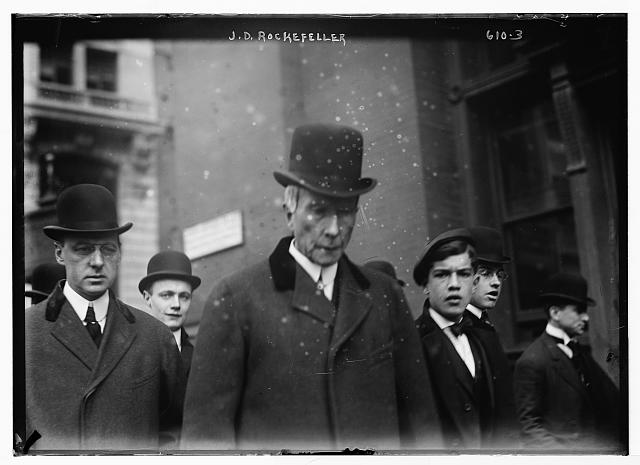 John D. Rockefeller created the Standard Oil Company, the success of which made him the world’s first billionaire and a celebrated philanthropist. He garnered both admirers and critics during his lifetime and after his death. Wall Street idolized his money-making abilities, muckrake journalists exposed his unethical business practices, and his charitable causes created a legacy of generosity.

John Davison Rockefeller was born on July 8, 1839 to William Avery Rockefeller and Eliza Davison in Richford, New York. His family later moved near Cleveland, Ohio, where he attended Cleveland’s Central High School before dropping out and starting his first job as an assistant bookkeeper, earning 50 cents per day. With the money he saved from his first job and a loan from his entrepreneurial, snake-oil salesman father, he opened his first business — a commodities brokerage — in 1859. Around the same time in nearby Titusville, Pennsylvania, Edwin Drake and the Seneca Oil Companycompleted the first drilled oil well. A discovery of large underground oil reservoirs, made accessible with new drilling technology, created a boom of oil companies in Pennsylvania and Ohio.

In 1870, Rockefeller joined in the oil business, along with his brother William, Samuel Andrews, Henry M. Flagler, and Stephen V. Harkness. Their business, the Standard Oil Company of Ohio, focused on oil refining, which had less variable costs than oil exploration and drilling. Rockefeller’s contemporaries often commented on his fixation with cost-saving and waste-reduction, but in order to be the best, he also invested in research and development. Standard Oil brought as much labor in-house as they could and focused on finding markets for refinery by-products. After knowingly buying fields in Ohio containing sour oil, Rockefeller relied on his research and development team to create a way to remove the oil impurities, which they eventually did, allowing him to cash in on oil no one else wanted. 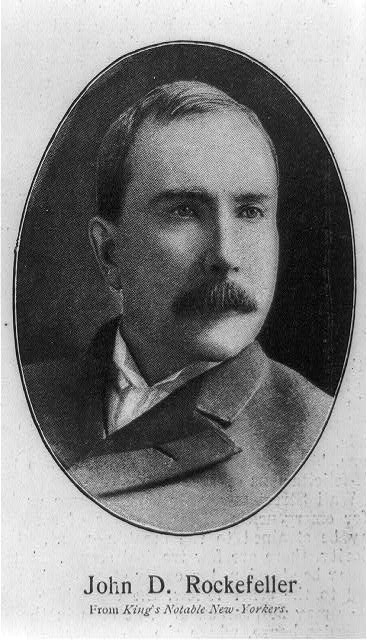 Rockefeller’s lack of opulence was also evident in his home life. He had married Laura Celestia “Cettie” Spelman in 1864, and together they raised their children, Bessie, Alice (who died as an infant), Alta, Edith and John Jr., in a devoutly Baptist household. Although they lived comfortably at their mansion on Euclid Avenue and their Forest Hill summer home, they avoided extravagant possessions.

While free-market capitalism led to the creation of numerous oil companies, it also, to Rockefeller, created unpredictable chaos in the industry, with oil refiners undercutting each other on prices, creating wide fluctuations. In order to remove this “marketplace inefficiency,” Rockefeller began acquiring competing oil refineries. Within the first three months of 1872, he had bought out, shut down or bankrupted 22 of his 26 Cleveland competitors. Unsympathetic to goodwill pricing, he offered a “fair market price” for refineries that were losing money with outdated equipment. However, as muckrake journalists later pointed out, the refineries were losing money because of Standard Oil’s monopoly. Its very size meant that Standard Oil, unlike other refineries, could negotiate a railroad discount by promising 60 carloads of oil daily, which appealed to railroad owners wanting to maintain a high and steady volume. These train rebates helped Standard Oil keep transportation costs low; other refineries could not compete. Oil and railroad tycoons proposed a deal to fix transportation costs, called the Southern Improvement Company, but public outcry quickly stopped further negotiations.

In 1882, Standard Oil Trust created a network of Standard Oil companies throughout the country, led by a board of trustees, where Rockefeller owned over one third of the certificates. By the late 1880s, Standard Oil controlled 90% of American refineries. This control of the market, along with the Southern Improvement Company scandal, caught the attention of politicians, who started passing anti-trust laws and prohibiting train rebates. Rockefeller had a strict no-talking-to-the-press rule, which did nothing to combat the widely popular, scathing critique of Standard Oil by journalist Ida Tarbell. Rockefeller eventually retired from daily operations in 1895, at the age of 56, but stayed in a figurehead role as president. 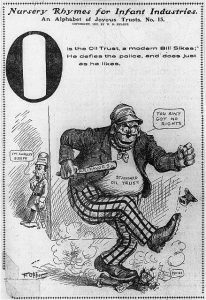 In 1911, the Supreme Court foundStandard Oil in violation of the Sherman Antitrust Act. As a result, Standard Oil was split into 34 independent companies, although over time these corporate descendants regrew into large integrated oil companies that still dominate the market, such as ExxonMobil. The Supreme Court case also hadn’t slowed Rockefeller’s wealth: newspaper headlines from 1916 announced he was the world’s first billionaire. According to Forbes, Rockefeller’s total assets in 1937 equaled 1.5% of America’s total economic output for that same year, making him one of the wealthiest people in the world to this day (in comparison, Bill Gates’ wealth in 2018 would be 0.45% of 2018 GDP). He was often approached about donating his money to various causes. His publicist Ivy Lee, hired after the anti-trust case, “cultivated the notion of a benign old man giving away dimes and preoccupied with charity,” according to one biographer. Rockefeller and his family established the Rockefeller Foundation in 1913, which supported public health causes through a large endowment. He also used his money to establish the University of Chicago and the Rockefeller Institute for Medical Research. His goal as a young adult was to make $100,000 and live to be 100 years old. While he surpassed his financial goal, John D. Rockefeller died on May 23, 1937, at the age of 98.

Did you find apk for android? You can find new Free Android Games and apps.
Sharing is caring:
education, world news, Library of Congress Library of Congress, World News, Education Comments Off on Rockefeller: Making of a Billionaire Print this News