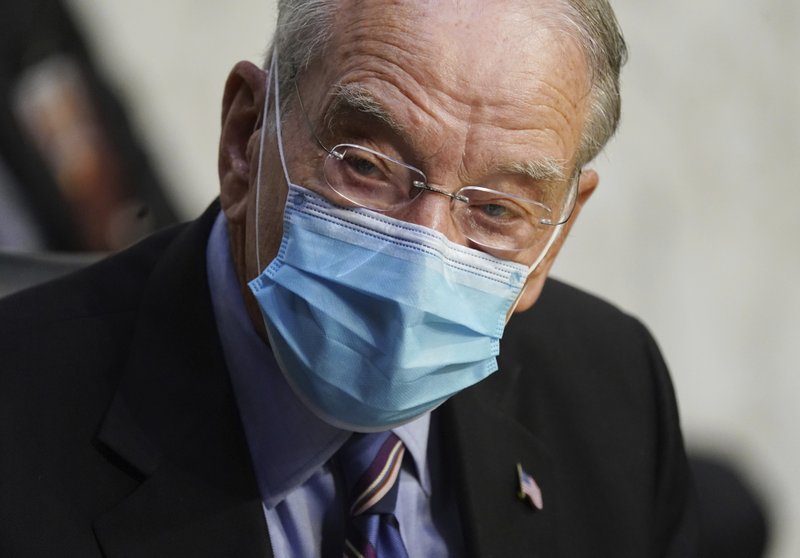 In this Oct. 12, 2020 file photo, Sen. Charles Grassley, R-Iowa, listens during a confirmation hearing for Supreme Court nominee Amy Coney Barrett before the Senate Judiciary Committee, on Capitol Hill in Washington. Grassley, the longest-serving Republican senator, says he is quarantining after being exposed to the coronavirus. Grassley is 87. He did not say how he was exposed. (Kevin Dietsch/Pool via AP)

WASHINGTON (AP) — Iowa Sen. Chuck Grassley, the longest-serving Republican senator and third in the line of presidential succession, said Tuesday that he has tested positive for the coronavirus.

Grassley announced earlier Tuesday that he was quarantining after being exposed to the virus and was waiting for the results of a test. On Tuesday evening, he tweeted that he had tested positive.

“I’ve tested positive for coronavirus,” Grassley wrote. “I’ll b following my doctors’ orders/CDC guidelines & continue to quarantine. I’m feeling good + will keep up on my work for the ppl of Iowa from home.”

The Iowa Republican, who was in the Senate and voting on Monday, did not say how he was exposed. His office said Tuesday morning that he was not experiencing any symptoms.

By missing votes Tuesday, Grassley broke a 27-year streak of not missing a single Senate vote. According to his office, the last time he missed a vote was in 1993, when he was in Iowa assisting with relief efforts after severe flooding.

Grassley was first elected to the U.S. House in 1974 and then to the Senate in 1980. He is the chairman of the Senate Finance Committee and is expected to become the top Republican on the Senate Judiciary Committee when a new Senate session begins in January.