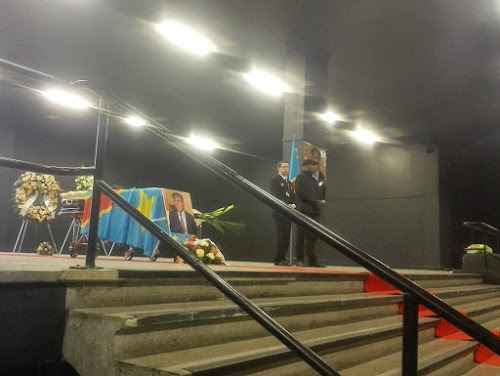 An English Version follows the French.

DRC: Tshisekedi’s remains will be exhibited at the People’s Palace

KINSHASA (Radio Okapi) – The remains of Etienne Tshisekedi will be exhibited at the Palais du Peuple, which was chosen as the venue, recollection and tributes for 48 hours. This is one of the decisions taken on Saturday 21 April in Kinshasa during talks between the government, the family of Etienne Tshisekedi and the UDPS.

After the talks, an agreement was signed between the three parties on the organization of the funeral of the former president of the UDPS. A special commission composed of nine members is set up to organize the funeral.

The Congolese government is committed to bear all the costs of organizing the funeral of Etienne Tshisekedi.

According to Bishop Gerard Mulumba, younger brother of the illustrious dead, this commission will be headed by Deputy Prime Minister and Interior Minister, assisted by a representative of the family and that of the UDPS.

The body is Etienne Tshisekedi is expected in Kinshasa on a date to be fixed later.

The three parties agreed that the body of Etienne Tshisekedi rest in the family plot in the commune of N’sele and invite all political and social forces to observe a political truce.

He asked the political forces to avoid any political exploitation by the words, gestures and acts likely to disturb the harmonious organization of the funeral.

This program will be implemented in good faith by the signatories said the statement signed by the Interior Minister Henri Mova, the governor of Kinshasa Andre Kimbuta, the UDPS Secretary General Jean-Marc Kabund and Bishop Gerard Mulumba brother of Etienne Tshisekedi.

The repatriation of the remains of Etienne Tshisekedi in Kinshasa has created tensions between his family, his party UDPS and the Government. Announced for March 11, 2017, the repatriation of the body of the president of the UDPS has still not occurred. For good reason: the family, the party and the Congolese authorities do not would agree on the place of burial, date of repatriation and funeral arrangements.