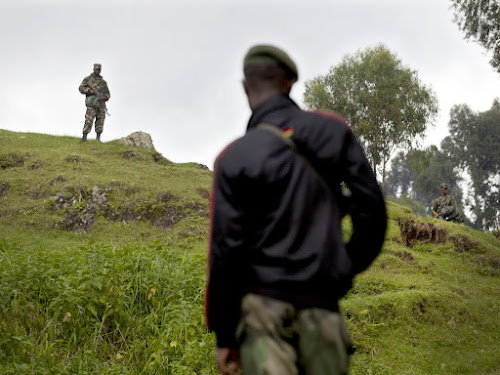 Rwandan and Congolese soldiers following a skirmish on the border of two countries where at least one FARDC soldiers were killed on 5 November 2012. © MONUSCO / Sylvain Liechti

The Armed Forces of the DRC (FARDC) submitted Monday, April 16 in Goma two soldiers of the Rwanda Defense Force (RDF), arrested on Sunday on Congolese soil, the Joint Verification Mechanism to facilitate their return to their country. According to the spokesman Sokola 2 operations, Major William Ndjike Kaiko, these soldiers found themselves on Congolese soil in the territory of Nyiragongo, having lost their bearings. They had with them two AK-47 weapons and communications equipment.

For Major William Ndjike Kaiko, this act is a strong message to show the neighbors that the Congolese army violating international humanitarian norms.

“Certainly these were left at home due to lack of benchmarks to the boundary. Replace these brothers in arms of the Rwandan army in the hands of CVD, it is for us to prove to the world that we are respectful of international standards, but we still prefer good neighborly relations which must exist between us and Rwanda. It was not important to get shot. They found themselves at home, certainly by mistake. Because the boundaries are not so clear. It is possible that we too can find ourselves on the other side, “argues Major William Ndjike Kaiko.

In the month of February, the commander of the Sokola 2 operation, General Bruno Mandevu, confirmed the incursion of the Rwandan army on Congolese soil causing a confrontation with the FARDC. Three Congolese soldiers were killed.

The preliminary report of the Joint Mechanism ICGLR verification indicated that the Congolese and Rwandan armies have both violated the territory of the neighbor, in these incidents in the Virunga National Park.

But the Congolese military, meanwhile, launching the offensive on 13 February against Rwanda Defense Force have in turn violated the border limits of Rwanda. The FARDC continued Rwandan soldiers, even at home, in Musanze district and it is precisely there that the three Congolese soldiers were killed, according to the report still.
Read also on radiookapi.net:
DRC: repatriation of bodies of soldiers killed by the Rwandan army
armies of the DRC and Rwanda have each violated the neighboring territory, according to the ICGLR
Clashes between soldiers and Rwandan Congolese in North Kivu