PHILIPPINES: If my plane explodes, you can ask the CIA – Duterte 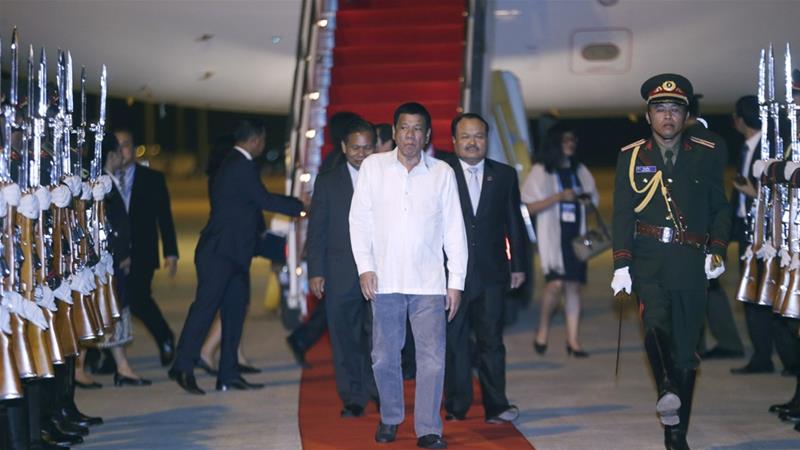 Duterte said that US President Donald Trump has voiced his approval of the Philippine drug war [File: EPA]

Duterte: If my plane explodes, you can ask the CIA

In expletive-filled tirade, Philippine president also accuses the US government of lacking ‘word of honour’.

Philippine President Rodrigo Duterte has launched a fresh expletive-filled tirade against the United States, accusing one of the country’s closest allies of lacking “word of honour”, while suggesting that the American Central Intelligence Agency (CIA) is out to get him.In a speech in Manila on Thursday, Duterte lashed out at the US government for halting the planned sale of firearms to the Philippines because of human rights concerns.

Is Duterte’s drug war undermining the rule of law?

“The fact is, the Americans really do not honour their word,” he said, justifying his decision to turn to China and Russia to acquire rifles for Filipino forces.

“At least, if ever my airplane explodes, or if some roadside bomb explodes, maybe you can ask the CIA,” Duterte told a group of farmers and fishermen gathered at the Malacanang presidential palace.

It was not the first time the Philippine president accused the CIA of plotting against him.

He had also claimed that the CIA was to blame for a botched 2015 raid against an armed Muslim leader that left 44 members of an elite police unit dead.

In February, Duterte had also claimed that the CIA is funding the news website, Rappler, allegations that the Manila-based company denied. Rappler has earned the president’s ire for publishing reports critical of his government.

US ambassador to the Philippines Sung Kim had denied that his government is trying to undermine the Philippine government. But a 2018 CIA report listed Duterte as one of the “regional threats” in Southeast Asia.

‘Loudmouths’
On Thursday, Duterte said Americans are “loudmouths”, criticising the US government’s shifting policy from former President Barack Obama’s admonition of the drug war to President Donald Trump’s supportive stance.He then referred to Obama as a “jerk” for criticising the Philippines’ human rights situation, and praised Trump for telling him he is doing a “good job”.

Who should stand up for human rights?
“So Americans, what values are you trying to impose on us? The values of Obama, the values of Trump, or your own national stupidity?”

Duterte also said that “someday” the US will also have to deal with the same drug problem the Philippines faces, only “one hundred times more serious”.

In the same speech, Duterte also defended himself from criticism that his statement against International Criminal Court (ICC) prosecutor Fatou Bensouda was racist.

Bensouda earlier confirmed that that ICC had initiated legal steps to investigate Duterte for possible crimes against humanity related to the deadly drug war.

According to an opposition Filipino senator, the death toll in the Philippine drug war had surpassed 20,000, since Duterte came to office on June 30, 2016.