PARENTING: Rebecca is going to be the Director for If/Then for University of Toronto

I have been working on a piece “Parenting is not as easy as I thought. Small kids small problems. Big kids, big problems”.  Then all of a sudden big kid with big problems says that she will be the director for one of the most acclaimed musicals.

Okay maybe in our madness, we did right and she is gonna rock this like her previous shows where she was director, producer or stage manager.
Congratulations pumpkin.
PS: She is a Trinnie.
——-Review: ‘If/Then’ a musical about lives chosen

“Accidents of fate are just the probabilities playing out,” says Liz — half of the two-lives-in-one protagonist, Elizabeth, in “If/Then,” the heart-on-sleeve musical about roads taken and opportunities lost now in a touring production at the Oriental Theatre.

One assumes that Beth (her other half) agrees with that assessment. Of course, you can’t really get them in the same room to ask, given the conceit at the heart of Tom Kitt and Brian Yorkey’s piece (a follow-up to “Next to Normal,” which took a rather different approach to a woman experiencing two different versions of her life).

Elizabeth (Jackie Burns), an instructor in urban planning eager to rebuild her life in Manhattan after fleeing Phoenix and the ashes of a failed marriage, meets two friends in Madison Square Park. There’s new pal Kate (Tamyra Gray), a forthright kindergarten teacher, and Lucas (Anthony Rapp), her old college friend/sometime-paramour who is now a community activist. “Liz” stays in the park with Kate, while “Beth” goes off with Lucas.

Like Clark Kent, Liz wears glasses, while Beth does not, though neither is vying for Superwoman status. Indeed, “If/Then” has a fairly conventional view of the limitations for contemporary professional women. Though it might be a bit confusing at first, it’s really not difficult to keep the parallel stories straight, if you will — glasses or no glasses.

Liz finds love with an Army doctor, Josh (Matthew Hydzik), and embraces teaching and motherhood, while Beth gets a high-powered job in the city department of planning through Stephen (Daren A. Herbert), another college friend, and remains single. In the Beth storyline, her position with the city puts her at odds with Lucas’ anti-gentrification views.

But her idealism still comes through in “A Map of New York.” If you ever wanted someone to write a musical based on Jane Jacobs’ urban-planning classic “The Death and Life of Great American Cities” — and why wouldn’t you? — this song, filled with lyrics like “Think of how human life will ebb and flow/ People, and how they’ll come and how they’ll go,” is probably as close as you’ll get. 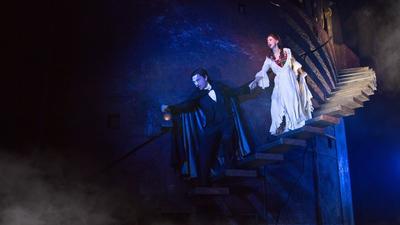 One can certainly quibble with the underlying assumption here that women still must split themselves between professional success and a satisfying home life. But particularly in the second act, as events grow more cataclysmic for Liz, “If/Then” becomes a paean to finding one’s tribe in the midst of loss and change.

That story of families of affinity (as well as the effects of gentrification, of course) also formed the heart of “Rent,” and “If/Then” not only shares the same director — Michael Greif — but also has Rapp’s Lucas as a sort of call-back to his role as Mark in Jonathan Larson’s musical. “You’re proof that you don’t have to lose your ideals when you get old,” a millennial fan of Lucas’ guidebook to activism burbles. It’s easy to imagine Mark wincing, as Lucas does, at the reminder of just how fast the slide from promising tyro to tetchy middle-aged guy can be.

But the show, which originally starred Idina Menzel, is really carried by Burns’ belting pipes and offhanded prickly charm. Both of these gifts add nuance to the score, which tends to stay in the mid-tempo pop ballad track even as Liz/Beth take chances on new notes in their lives. Burns handles the tougher-than-it-seems job of playing a woman who doesn’t like to reveal any more than necessary — until she’s nearly at the point of crumbling. Successful urban planning is as much about the unseen infrastructure as it is the flashy public projects, after all, and Burns is pretty terrific at suggesting the subterranean depths of both Liz and Beth as they doubt the choices they’ve made. 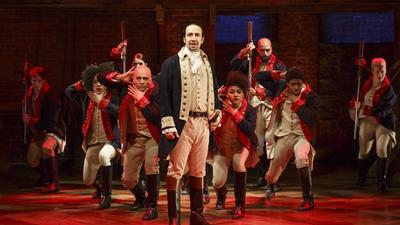 Sure, the vision of urban life here hews to a pretty privileged demographic — the demographic that can, for example, afford Broadway tickets to a show about contemporary urban life. But Yorkey and Kitt flesh out Liz/Beth’s worlds with knowing winks at contemporary trends. In the Liz storyline, bisexual Lucas falls in love with David (Marc Delacruz), a fellow doctor friend of Josh’s whose interest in urban farming (and the fact that he actually owns a house) makes him irresistible to an activist who wants his principles, but also some creature comforts at the end of a day on the barricades. Herbert’s careerist Stephen, on the other hand, functions primarily as a means of moving Beth’s career along, and the attraction between him and Beth never feels honest.

Hydzik’s Josh is also frustratingly underdeveloped for all the emotional weight his character must lend to Liz. But he delivers his ode to new parenthood, “Hey Kid,” with wistful determination — like “Carousel’s” Billy Bigelow without the rageaholic tendencies.

“If/Then” sometimes falters as it homes in on familiar home truths, and there are, to be sure, moments where the earnestness feels more wincing than revealing. But it also has some lovely insights into how the phantom pains of missing a life we never had can haunt and shape our choices — and that we can always find something new to live for, if we just remember to look up every once in a while.

Did you find apk for android? You can find new Free Android Games and apps.
Sharing is caring:
University of Toronto, If/Then, Musical performance, Director Rebecca Entertainment, Education Comments Off on PARENTING: Rebecca is going to be the Director for If/Then for University of Toronto Print this News