PARENTING: Children are not punching bags for your failed marriage / relationship 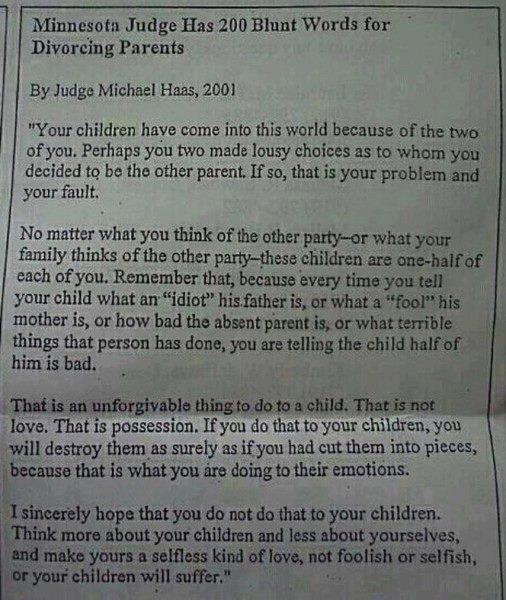 Minnesota Judge Has 200 Blunt Words
for Divorcing Parents
By Judge Michael Haas
2001
“Your children have come into this world because of the two of you. Perhaps you two made lousy choices as to whom you decided to be the other parent. If so, that is your problem and your fault.

No matter what you think of the other party—or what your family thinks of the other party—these children are one-half of each of your. Remember that, because every time you tell your child what an “idiot” his father is, or what a “fool” his mother is, or how bad the absent parent is, or what terrible things that person has done, you are telling the child half of him is bad.

That is an unforgivable thing to do to a child. That is not love. That is possession. If you do that to your children, you will destroy them as surely as if you had cut them into pieces, because that is what you are doing to their emotions.

Original Article
The following advice from retired Minnesota Judge has been circulating for years among judges, attorneys and child advocates as powerful words of advice for all parents going through a divorce.  We hope you’ll take the time to read them!

Judge Michael Haas retired in December 2002 after 26 years of service as a Judge in Cass County, Minnesota.  In a letter written to advice columnist Abigail Van Buren as early as October 1994 by attorney Paul J. Kiltinen of Baxter, Minnesota, Mr. Kiltinen shared the following remarks by Judge Hass in a particularly difficult divorce case, describing the Judge’s remarks as “some of the most profound words of wisdom I’ve ever heard from the bench in all my years as an attorney.  His philosophy could provide insight to all parents, especially those who are involved in difficult dissolutions.”

This message was “resurrected” in 2000 when it was republished as a letter published by advice columnist Ann Landers (the twin sister of “Dear Abby”).

More than 15 years after the fact, Judge Haas’ moving words are sprinkled all over the Internet, found on court websites, blogs, attorney webpages, in court decisions and in law journals.

We don’t know if Judge Haas was speaking extemporaneously on the record or if these 197 words above were purely “off the cuff”.  Regardless, this message will always remain profound and powerful advice when parents are ready to engage in custody battles for their children.
===