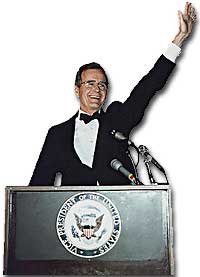 By USA HISTORY TODAY
In the 1988 election, George Bush and his running mate. Dan Quayle, won 54% of the popular vote and 426 of the 538 electoral votes, soundly beating Democrat Michael Dukakis.

The first major foreign crisis for the United States after the end of the Cold War presented itself in August 1990. Saddam Hussein, the dictator of Iraq, ordered his army across the border into tiny Kuwait. This was no ordinary act of aggression. Iraq’s army was well equipped. The United States had provided massive military aid to Iraq during their eight-year war with Iran, giving them the fourth largest army in the world.

Kuwait was a major supplier of oil to the United States. The Iraqi takeover posed an immediate threat to neighboring Saudi Arabia, another major exporter of oil. If Saudi Arabia fell to Saddam, Iraq would control one-fifth of the world’s oil supply. All eyes were on the White House, waiting for a response. President Bush, who succeeded President Reagan, stated simply: “This will not stand.”

In the last months of 1990, the United States participated in the defense of Saudi Arabia in a deployment known as Operation Desert Shield. Over 500,000 American troops were placed in Saudi Arabia in case of an Iraqi attack on the Saudis. The U.S. further sought multilateral support in the United Nations Security Council. Traditionally, Iraq was an ally of the Soviet Union, who held a veto power over any potential UN military action. Looking westward for support for their dramatic internal changes, the USSR did not block the American plan. The UN condemned Iraq and helped form a coalition to fight Saddam militarily.

Bush, remembering the lessons of Vietnam, sought public support as well. Although there were scant opponents of the conflict, the vast majority of Americans and a narrow majority of the Congress supported the President’s actions. When all the forces were in place, the United States issued an ultimatum to Saddam Hussein: leave Kuwait by January 15,1991 or face a full attack by the multinational force. 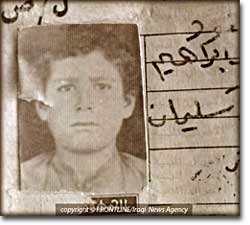 Saddam Hussein grew up in a poor family. As a boy he was forced to steal eggs and chickens so the family could eat. In his late childhood he became a gun man for the Ba’ath Party and was involved in an assassination attempt on a military leader in Iraq.

January 15 came and went with no response from the Iraqis. The next night Desert Shield became Desert Storm. Bombing sorties pummeled Iraq’s military targets for the next several weeks. On many days there were over 2500 such missions. Iraq responded by launching Scud missiles at American military barracks in Saudi Arabia and Israel. Attacking Israel was a stratagem to persuade all the neighboring Arab nations to join the Iraqi cause. After intense diplomatic pressure and negotiation, the Arab nations remained in opposition to Iraq.

On February 24, the ground war began. Although the bombing lasted for weeks, American ground troops declared Kuwait liberated just 100 hours after the ground attack was initiated. American foot soldiers moved through Kuwait and entered southern Iraq. This posed a dilemma for the United States. The military objectives were complete, but Saddam, the perpetrator of the unprovoked invasion of Kuwait, was still ruling Iraq from Baghdad. President Bush feared that the allies would not support the occupation of Baghdad. Concerns were raised that if Saddam’s regime were toppled, the entire nation could disintegrate into a civil war. Soon Iraq agreed to terms for a ceasefire, and the conflict subsided. 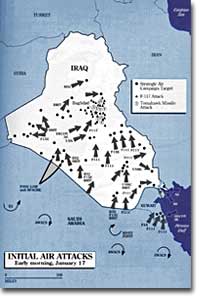 This map shows the initial air attacks of Desert Storm made by the allied forces early in the morning on January 17, 1991.

Iraq did not leave Kuwait untouched. Millions of dollars of valuables were plundered by the occupying troops. As Iraq retreated, they detonated explosives at many of Kuwait’s oil wells. The disaster to the environment grew as Iraq dumped oil into the Persian Gulf. The costs were enormous, and casualty figure staggering. Although estimates range in the hundreds of thousands of Iraqi deaths, only 148 Americans were killed in the battle. This was primarily because of the technological advances of the United States.

The Persian Gulf War was a television event. CNN broadcast round-the-clock coverage of unfolding events. Americans saw footage from cameras placed on smart bombs as they struck Iraqi targets. The stealth fighter, designed to avoid radar detection was put into use for the first time. General Norman Schwarzkopf and General Colin Powell became household names as citizens watched their direction of the conflict.

The United States passed its first test of the post-Cold War world. Skillful diplomacy proved that the United Nations could be used as an instrument of force when necessary. Although Moscow did not contribute troops to the operation, they gave tacit approval for the attack. The potential for multinational cooperation was demonstrated. The largest American military operation since Vietnam was completed with smashing success. Most Americans felt confident in their military and technological edge once more. President Bush promptly declared that the “new world order had begun.”