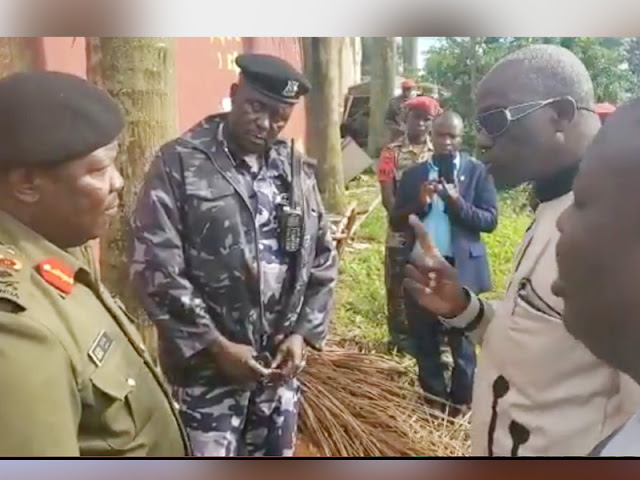 Museveni’s powerful but redundant Minister of Security, Gen. Elly Tumwine has this morning publicly humiliated the former Deputy Army Chief and Deputy Commander of Museveni’s Operation Wealth Creation, Gen. Charles Angina. The incident followed Gen. Tumwine rushing to the scene of a land wrangle to provide a backup to the State House personnel who had intervened on behalf of one of the parties, city tycoon, Kirumira. During the episode, Gen. Angina who had come to defend the interests of a one Dr. King was embarrassingly treated as an army Corporal.

The army, and in particular, the top echelon have in recent times taken the lead in direct land grabbing and facilitation of the same. In July 2015, the then Lands State Minister, Aida Nantaba disclosed that high ranking army officers and regime officials were behind the illegal evictions from land and direct land grabbing.

In May 2017, the same Minister told the Land Probe Commission that top military Generals were deeply involved in land grabbing.

Around March 2017, during a consultation meeting at Nakaseke Town Hall, Maj. Kakooza Mutale accused Museveni of backing “powerful in the army and government who are grabbing land from the powerless.” He had been tasked by Museveni to investigate land grabbing in Nakaseke.

The incidents of army officers involvement in land grabbing are rampant and not even a single officer has ever been reprimanded.

On August 23, 2017 this website ran a piece titled;  MILITARY LAND BOARD – ANOTHER MUSEVENI TOOL FOR LAND GRABBING
in which we highlighted several incidents of violent land grabbing by top military personnel.  In particular, Gen. Tumwine is cited in grabbing land in late 2012 when he grabbed and fenced off public land in Kyabahura in Kazo which is in Kiruhura District Council had reserved for developmental projects.  Not to mention, the closure of public roads around his residence in Kololo and grabbing of government owned NOMO Gallery.

Away from Land grabbing, both junior and senior army officers have been involved in different misconducts against the civilian population.  Gen. Kyaligonza beating up a female Traffic Police Officer, Gen. Kasirye Gwanga has repeatedly been shooting and injuring civilians and destroying private property.

It is against this background that Gen. Angina connived with the notorious Kampala Metropolitan Police (KMP) Field Forces Commander Senior Superintendent of Police, Rashid Agero to also side with their fellow Iteso in the wrangle, Dr. King.  However, the two forgot that they are not ‘home boys’ and are simply being used by the regime. That is why they were sternly warned not to ‘abuse our forces’.  Surprisingly, they also failed to bear in mind that most of these so-called city tycoons are just fronts of some regime oligarchies who steal from public coffers.

In March 2017 Gen. Angina orders to arrest Capt Bashaija were humiliatingly defeated from ‘above’.  The highly connected Capt. Bashaija had grabbed land belonging to NARO at the Mbarara Stock Farm.  Unfortunately, Gen. Angina did not lean any lessons from that experience.

World over the army follows laid down standard procedures of reprimanding its personnel in accordance with the rank.  There is no way an army General can be humiliated in public even if he is taken captive as a Prisoner of War.  Since, Gen. Charles Angina got commissioned about 35 years ago he has never been humiliated the way it has happened with Gen. Tumwine.  In a professional army, Gen. Angina can get redress from the Army chief or the Commander in Chief who can call Gen. Tumwine to order.  Unfortunately, Gen. Tumwine is above the current army chief and enjoys immunity and protection from Museveni.

Gen. Charles Angina joined the NRA after the fall of Kampala from the defeated ‘Obote/Lutwa’s UNLA.  He had his initial military service with the NRA under Military Intelligence.  As a Division Intelligence Officer, he excelled by a long service under the late Brig. Cheffe Ali in the eastern, western and northern region.  At one time he was accused by detractors of conspiring with Brig. Cheffe Ali to hide guns in the Rwenzori mountain and plotting to tople Museveni.  The incorruptible and professional Gen. Angina rose to become the Deputy Chief of Defence Forces.  However, when he poked his nose into fighting high level corruption in the army, Museveni sacked him and rendered him redundant.