NORTH KOREA: South Koreans do not trust the North’s “sincerity” 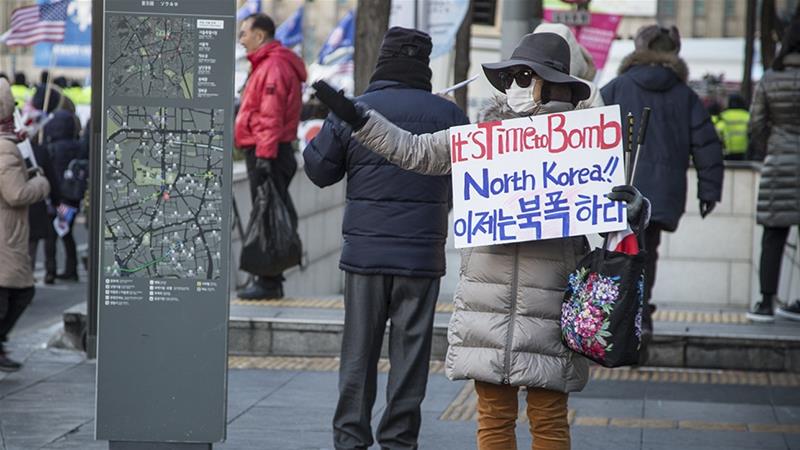 Seoul, South Korea (AL JAZEERA) – North Korea’s willingness to hold talks with the South and the US has been welcomed by South Koreans although with a bit of scepticism with regards to Kim Jong-un‘s sincerity in having a dialogue, according to a recent poll conducted in South Korea.

The North Korean leader agreed to meet South Korea’s president next month and impose a moratorium on nuclear and missile tests if his country holds talks with the US.

The North’s surprise outreach for talks raises hopes for South Koreans that upcoming summit talks would defuse tensions on the Korean Peninsula.

“The North Korean side clearly stated its willingness to denuclearise,” a statement from South Korean President Moon Jae-in‘s office said.

“It made it clear that it would have no reason to keep nuclear weapons if the military threat to the North was eliminated and its security guaranteed.”

A survey conducted by RealMeter in South Korea on Monday said 73.1 percent of respondents welcomed North Korea‘s proposal for dialogue and willingness for denuclearisation.

However, 64.1 percent of respondents said they did not trust North Korea’s sincerity in denuclearisation and having a dialogue.

Respondents in their 20s were the most critical – 74 percent of them expressed their distrust in the regime.

The views on the ground in South Korea echo the results of the survey.

“I’m half optimistic and half suspicious over North Korea’s sudden change in attitude,” Kang Youn-mo, a 34-year-old entrepreneur in Seoul, told Al Jazeera.

Another 35-year-old office worker Song Dong-suk wondered “what caused North Korea to change their course of action all of a sudden”.

“I think future talks with North Korea will be able to figure out what their intentions are and pave the way for denuclearisation and peace,” Song added.

North Korea has been testing missiles since 1984. It proclaimed itself as a nuclear-armed state in 2012, and has worked for more than a decade to build nuclear weapons and missiles.
READ MORE
Why North Korea decided to play nice

A series of nuclear and missile tests from 2016 and 2017 left the regime under wide-ranging economic sanctions by the US and the international community.

Experts say North Korea’s surprising shift in attitude leaves not only South Koreans but the international community confused over its intention.

“North Korea was firing missiles until November last year, and all of a sudden they are changing their course,” said Hong Min, director of the North Korean studies division of the Korea Institute for National Unification.

“People are confused because things are happening without any logical consequences. That leaves them to wonder whether it’s just a trick to avoid sanctions.”
Political inclination

Hong notes that the world should expect something different this time.

“It is the first time in history that current leaders of North Korea and the US are meeting for a summit. It shows their strong willingness to bring political resolution. Of course, they face scepticism and suspicion, but it is possible they will put an effort to work it out to avoid such criticism.

“There could be misunderstandings along the way, but the bigger picture looks positive,” Hong added.

However, some on the streets of Seoul have called the South Korean government to prepare for the worst.

“Nuclear weapons are what North Korea claims keep the regime in power. The idea of North Korea voluntarily dismantling nuclear weapons seems too positive and naive to me,” said a 46-year-old office worker YR Chung.