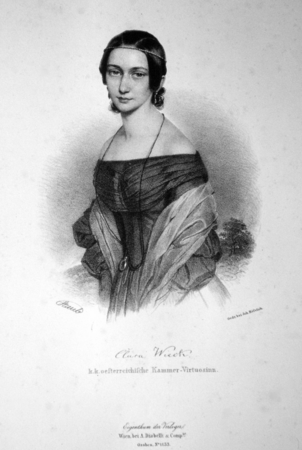 By Cait Miller, LIBRARY OF CONGRESS
One year ago, I published a blog post declaring my excitement about a one-year countdown to Clara Schumann’s 200th birthday and highlighted Schumann’s manuscript cadenzas from the Library’s Whittall Foundation Collection, material that is digitized and available online. Now, finally, Clara’s big day has arrived!

200 years ago, in Leipzig, Germany, Marianne Tromlitz gave birth to her second of five children, a girl named Clara. Tromlitz, a singer and pianist, had been married to piano teacher and businessman Friedrich Wieck for three years at the time. Wieck named his daughter “Clara,” meaning “brilliance,” in hopes of raising a virtuosa. Ultimately, through strict discipline and rigorous instruction, Wieck accomplished his goal in Clara, his Wunderkind. Clara’s formal musical training started when she was five years old and Wieck structured her daily routine and schooling so as to prioritize her artistic training. There was little socialization for Clara, though she enjoyed membership in her father’s music circle by the time she was nine years old. At 11 years old, Clara was preparing for her solo debut at the Leipzig Gewandhaus. Shortly before her anticipated debut, her father welcomed a new boarder who had sought out piano study with Wieck – a 20-year-old former law student by the name of Robert Schumann. The two students followed Wieck’s rigorous regimen, and Clara found a companion in Schumann; he was nine years her senior, but Clara’s technique and musicality outshone Schumann’s and, as time went on, Robert would see Clara as a vehicle for performing his original music. Ultimately, by the time Clara was 16, the relationship shifted to one of romance. In a 2011 blog post I highlighted their courtship with a love letter from our Heineman Collection. Wieck was furious at the courtship and even more enraged at their engagement. Despite paternal vitriol and Friedrich Wieck’s smear campaign against his former student, the Schumanns married in 1840, inspiring Robert’s famous Year of Song.

Of course, Clara’s accomplishments extended beyond performance – she, too, composed stunning music. The Music Division is fortunate to hold a holograph manuscript for one of her last published works: her setting of the Hermann Rollett poem “An einem lichten Morgen,” the second song from her Sechs Lieder aus Jucunde, op. 23, composed in 1853. That year, Schumann wrote to her half sister, Marie, and commented that “To my great joy, all the pieces [opp. 20-23] were so well done that there was nothing that Robert wanted to change. So you see, as one gets older there are also many pleasures that only a more mature mind and feelings can bring.” (Nancy Reich, Clara Schumann: The Artist and the Woman, p. 215) It was reported that Rollett enjoyed the songs immensely and wrote to Robert Schumann, assuming that he had penned the music; Robert confirmed that the music was by Clara and, even if the composer wasn’t his wife, he would still very much recommend the songs. After writing op. 23, Clara asserted that “There is nothing that surpasses the joy of creative activity, even if only for those hours of self-forgetfulness in which one breathes solely in the realm of tones.” (Reich, Clara Schumann: The Artist and the Woman, p. 215) It is well documented that Schumann’s diary includes many self-deprecating remarks about her value as a composer; however, her enthusiasm for her op. 23 is unmistakable.

I’m thrilled that the Library’s 2019-2020 concert series will feature multiple Clara-centric events this December in celebration of her 200th birthday:
Screening of Twin Spirits on Thursday, December 5, 2019
Sting and his wife Trudie Styler give life to the letters of Robert and Clara Schumann alongside performances of their music by Iain Burnside, Natalie Clein, Rebecca Evans, Simon Keenlyside, Sergei Krylov, and Natasha Paremski.

Concert devoted to Clara Schumann’s Works on Friday, December 6, 2019
Pianist Anne-Marie McDermott, violinist Kerry McDermott, cellist Maureen McDermott, and soprano Susanna Phillips perform a program of Clara Schumann’s works, including her Romances, Piano Trio, Lieder, and more.
(Note that there will be a pre-concert lecture at 6:30pm in Whittall Pavilion as well as a post-concert “Nightcap” conversation with the artists onstage.)

#Declassified: Clara Schumann in the Library’s Collections on Saturday, December 7, 2019
Join music reference specialist Cait Miller (me!) for a discussion of Schumann’s extraordinary life and career, brought to life by a display of Schumann materials from the Library’s unique collections.

Take some time today to celebrate Clara! And, of course, it is my sincere hope that any special attention the composer is paid during her bicentennial inspires a lifelong appreciation and enthusiasm for her distinctive voice. More questions about Clara Schumann or Schumann-related material in our collections? Contact a music reference librarian using our Ask A Librarian service.