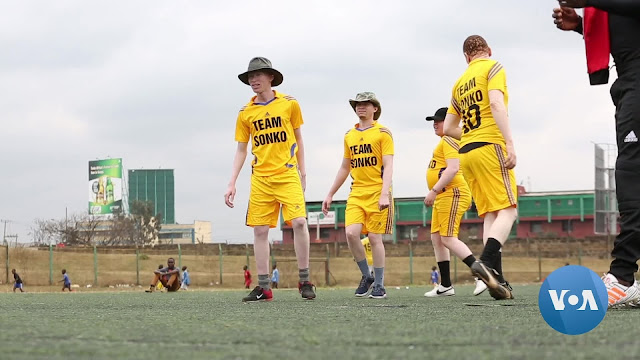 NAIROBI – Growing up with albinism, 24-year-old Allan Herbert, a Kenyan journalism graduate, knew he was different. While he did not experience the same stigmatism and discrimination of his peers living with albinism, he had to be shielded from the sun by his peers. It is this special treatment and media stories of the brutal attacks suffered against albinos that made Herbert start a football team — his way of helping people with the genetic disorder fight for their space in Kenya. This past weekend, the team won its debut match in what Herbert says he hopes is a first of many.

“Football brings people of different diversity together, and when we decided on a sport, we said football is the easiest, and it is also in the school curriculum so people relate with it easier,” Herbert said.

Across East Africa, people with albinism have been targeted in brutal ritual killings for their body parts to be used in witchcraft, mainly due to their white skin — a condition that is caused by lack of pigmentation. Isaac Mwaura, a senator in Kenya, has been campaigning for the rights of people with albinism. He is Kenya’s first and only lawmaker living with albinism.

In their debut match, the 6-month-old team carries the day 4 to 2 in a penalty shootout.

“Once we fight the discrimination, once we beat the stigmatization, then we can see the greatness in us. We have won fair and square,” Herbert said.

As the match comes to an end, and Herbert celebrates with his teammates, the journalism graduate says there is no turning back on the dream of one day playing in the Kenyan premier league, and hopefully representing his country on the international stage.

“We are not different in any way. The only thing is our skin is a bit pale and we have issues with our eyesight. But that does not make us less as people,” Herbert said.