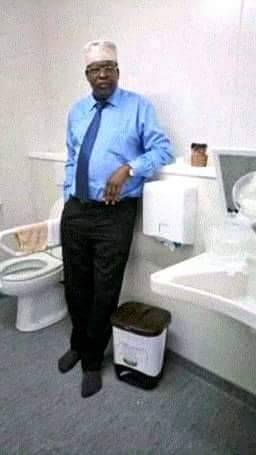 Emirates has conspired with Uhuru thugs while Baba Not plays golf.

Kenyans who refuse to see that their country is being turned into a SHITHOLE like Uganda will pay a price.

The whole EAC and Great Lakes is litred with bodies and soaked with blood by KKKK.

Shocking that even the Canadian govt is mute. But we are gonna vote Trudeau out anyway.

Today it is Dr. Miguna Miguna but soon they will come for you too.

As an East African, I stand with Muguna. As a Canadian, I will meet with my MP Hon. Dominique Leblanc.  As an IT professional, I will use the Internet to keep exposing the gross injustices of EAC.
====

I’m sore. I’m exhausted. I’m feeling ill. But my spirit is strong. My mind is focused like a laser beam. My determination is iron-clad.

Fear isn’t part of my DNA!

We must defend the rule of law, constitution and our nascent democracy.

We must tell the despotic duo – Uhuru Kenyatta and William Ruto, together with their surrogatic minions – that power belongs to the people.

Weapons the despots wield and use against the people demonstrate their cowardice and desperation; not genuine power.

It’s more than 13 hours since I was violently dumped at the Dubai following my assault, drugging and being placed in Emirates Air unconscious.

So far, Air Emirates has refused to return me to Nairobi. It argues that the illegitimate Uhuru Kenyatta government has threatened to deny them landing rights if they fly with me to Nairobi.

Emirates Air has also claimed that it was forced to carry me unconscious with no travel documents because the “state had refused to allow them permission to leave.”

In other words, Emirates Air is claiming that it was forced to commit the serious crime of carrying an unconscious passenger who hadn’t purchased a ticket with them, hadn’t been processed through immigration and customs and had been brought to them in an unconscious condition by heavily armed thugs.

There is absolutely no justification for that kind of inhuman treatment and violence against an unarmed man.

I have read reports that Governor Joho and other ODM members of parliament had visited me here today.

I have neither seen nor received a call from any ODM leader since I was violently assaulted, drugged and dumped here!

Finally, I am appealing to the Kenyan youth and other patriots to come out in the streets of Kenya in huge numbers and demonstrate their abhorrence at the ruthlessness of the thugs in power and in order to expose the hypocrites who have previously pretended to be vocal over human rights abuses but have suddenly gone mute.

Some of those hypocritical NGO mandarins shamelessly toasted and dinned with the agents of the brutal state at high end hotels yesterday as I was held incommunicado, physically tortured, drugged and forced flown out to Dubai against my will.

It is me today. But tomorrow, it might be some of those silent NGO activists, hypocritical commentators and cynical and duplicitous politicians.

This is the time to separate the wheat from the chaff.

We must fight together as patriots and defeat the despots.

Did you find apk for android? You can find new Free Android Games and apps.
Sharing is caring:
kenya, EAC, Emirates, raila Kenya Comments Off on KENYA: Update by @MigunaMiguna on @Ukenyatta @Emirates @RailaOdinga Print this News