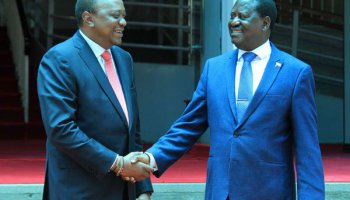 I thank God, family, relatives, true friends and genuine supporters for their support, generosity and strong commitments to justice and principles of democracy.

Today, I have arrived in Ontario, Canada in order to undergo specialized toxicology tests and medical treatment following my illegal and violent abduction, torture and chemical poisoning by the tyrannical Jubilee regime.

I have been advised of reports in sections of the media outlining that I’ve used my Canadian passport to travel.

The compromised media has lost a sense of commonsense and professional ethics.

This is not a case of which travel documents I use or have used to seek emergency and specialized medical attention.

I refused to use hand over my Canadian passport to the tyrants in Kenya because I arrived in Kenya on March 26th as a Kenyan born citizen.

My forced removal from Kenya on February 6th was illegal. It followed 5 days of illegal abduction, incommunicado detention, torture and in violation of 7 court orders.

I did not travel out of Kenya on February 6th and March 28th, respectively. I was abducted and removed in violation and disobedience of various court orders.

More than 10 court orders have ruled that my abductions, arrests, detention without trial, torture, chemical poisoning and removal from Kenya have been illegal.

The courts have issued orders that those who removed me from Kenya illegally on two separate occasions must facilitate my return unconditionally.

In other words, the courts have ruled that I didn’t travel out of Kenya on the two occasions and therefore my return must be unconditionally.

Those purporting to be making demands on me regarding how I can return to my country of birth have now been criminally convicted and sentenced by a court of competent jurisdiction.

Convicted criminals cannot make demands on an innocent citizen. They are holding public office illegally. They are using those illegally held office to abuse power and subject me to torture, cruel and inhumane treatment.

On March 28, I was assaulted, drugged and forced out of Kenya unconscious.

The issue here is not how I have traveled to get medical treatment or on what passport.

The issue here is my abduction, assault, drugging and forceful removal by a rogue regime in defiance of more than 10 court orders!

The way I have been abused and tortured reflect the state of our society where a rogue regime of the rich oppresses millions of Kenyans in order to protect their ill-gotten wealth, economic and political interests.

After my medical treatment abroad I intend to immediately return to Kenya and to continue the struggle for a better and just society that we Kenyans have been yearning for 55 years!

Dr. Miguna Miguna, General of the National Revolutionary Movement of Kenya (NRMKe).
From a specialized hospital in Ontario, Canada. Published on April 02, 2018 at 09:33AM