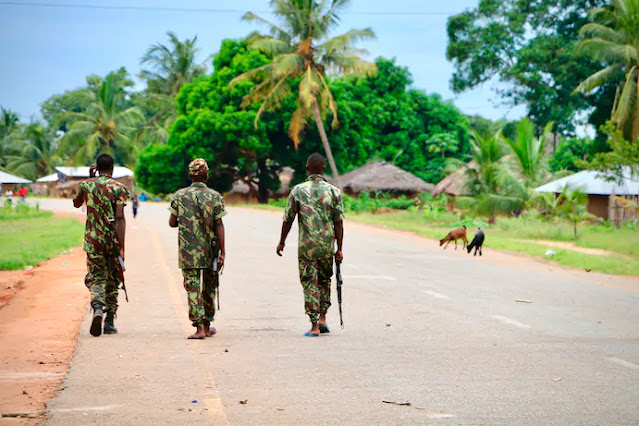 By THE WASHINGTON POST
DAKAR, Senegal — On Aug. 5, militants carrying the black flag of the Islamic State launched a daring land-and-sea assault on the strategic port city of Mocimboa da Praia in northern Mozambique. In less than a week, they routed government forces and captured the entire town, declaring it the capital of a new Islamic province.

The two attacks on opposite sides of Africa are among the scores of violent episodes to shake the continent in what experts are calling a breakout year for extremist groups affiliated with al-Qaeda or the Islamic State. Less than two years after the fall of the Islamic State’s self-declared caliphate in Syria and Iraq, the terrorist group is attempting a comeback in Africa, with far-reaching implications for a region already beset by poverty, corruption and the novel coronavirus.

At least three Islamist insurgencies are surging across broad swaths of territory, from the deserts of the Sinai, to the scrublands of the western Lake Chad basin, to picturesque Indian Ocean villages and resort islands in the Southeast. The spike in terrorist attacks mirrors a steady, if less dramatic, increase in Islamist violence in parts of Syria and Iraq, driven by Islamic State fighters who slipped away after the caliphate’s defeat and have now regrouped.

The resurgence threatens to undermine one facet of President Trump’s reelection pitch to voters: his oft-repeated claim of victory over the Islamic State. While Trump presided over the final phases of the U.S.-led military campaign to destroy the physical caliphate, the effort to contain the group and its violent ideology has faltered, according to current and former counterterrorism officials and independent analysts.

The rise in violence comes as the Trump administration moves to slash U.S. troop deployments and threatens to curtail support for local governments on the front lines of the battle against Islamist militants. The White House is considering steeper cutbacks in U.S. military forces in Africa, despite warnings from some analysts that the reductions could further hamper efforts to check the extremists’ advance.

“ISIS is not dead,” said Robert Richer, the CIA’s deputy director of operations during the George W. Bush administration, using a common acronym for the Islamic State. “We destroyed the caliphate, but they’re now popping up in numerous places. Meanwhile, the worldwide coalition to fight ISIS doesn’t really exist anymore.”

Trump has championed his counterterrorism successes at nearly every campaign event, often referring to the Islamic State in the past tense. “We obliterated 100 percent of the ISIS caliphate,” he said in his acceptance speech at the Republican National Convention in August.

But other officials say the threat has merely shifted to new regions and different forms. In the 18 months since the fall of the Islamic State’s last Syrian stronghold, the group’s African affiliates have seen dramatic gains in territory and recruits, as well as in firepower, according to a study published in August in CTC Sentinel, a journal published by the Combating Terrorism Center at West Point.

“Instead of an asymmetric, opportunistic insurgency, it’s large numbers of fighters, attacking large numbers of soldiers using weapons that are of a similar or greater caliber,” said Charlie Winter, a senior research fellow at the International Center for the Study of Radicalization at King’s College London, and a co-author of the study. “And they have shown a decent ability to maneuver.”

‘The godfather of jihad’

As a presidential candidate in 2016, Trump promised a speedy and resounding defeat of the Islamic State. In rallies and interviews, he vowed to “carpet-bomb” parts of Iraq and Syria held by the militants.

After his election, however, his White House advisers adopted, with minor adjustments, the strategy that had been in place by the Obama administration in 2014. Backed by a coalition of more than 80 countries, the United States provided air power and intelligence support for Iraqi troops and Kurdish and Syrian Arab fighters who liberated terrorist-held towns one by one. About half of the caliphate’s land holdings — including parts of Mosul, the Islamic State’s eastern capital — had been freed by the time Trump took office in 2017.

Trump’s prosecution of the war drew praise from many counterterrorism experts, as did the administration’s effort to find and kill the Islamic State’s leader, Abu Bakr al-Baghdadi, who blew himself up when cornered by U.S. Special Operations forces in October 2019. The aggressive hunt for the leader also marked a continuation of tactics in place since the latter years of the Bush administration.

“The biggest success story for us in the last dozen years is the way we created a leadership crisis in the global jihadist movement, by effectively taking out every senior leader,” said Bruce Riedel, a former CIA official and senior adviser to four U.S. presidents. “We’ve become very good at what the counterterrorism world calls ‘decapitation.’ ”

But even as U.S. and allied forces tightened the noose on Baghdadi’s followers in Iraq and Syria, other White House policies undermined the effort to defeat violent Islamist militant ideology globally, according to Riedel and other counterterrorism experts. Trump surprised his own security advisers by twice announcing — and then reversing — a decision to unilaterally withdraw U.S. forces from Syria, signaling an abandonment of U.S.-allied Kurdish fighters who were still battling thousands of Islamic State militants who fled as the caliphate was crumbling.

Meanwhile, Trump’s anti-Islam rhetoric and ban on Muslim immigrants handed the militants a propaganda win, reinforcing a “fundamental al-Qaeda message, which is that America is against Islam,” Riedel said.

“That’s going to come back to haunt us,” Riedel said. “We may have made it very difficult for them to operate, but their message is still very, very strong, and we’re not doing much to fight that message.”

Even before Baghdadi’s death, the Islamic State was beginning to adapt to changing circumstances. Under the former leader, the group’s core followers in Iraq and Syria had begun to transition from a landholding terrorist enclave to an underground insurgency. In his final video message, Baghdadi also symbolically passed the torch to the group’s “wilayats,” or regional affiliates, signaling that these would now take on a more prominent role as leaders of the global movement.

But even Baghdadi might have been surprised by the strength displayed by the group’s African offspring in the year after his death.

Most striking is the growth of Islamist groups in West Africa, home to two Islamic State affiliates and an al-Qaeda branch, operating and frequently competing across Mali, Niger and Burkina Faso.

While Islamist militants have been active in the region for years, the problem worsened dramatically over the past two years. Violence in the region killed 4,825 people in 2019 — the highest in at least a decade, according to the Armed Conflict Location & Event Data Project, a nonprofit that compiles reports on such incidents around the world. By October, this year’s casualty count had climbed to 5,365, already assuring that 2020 will be far deadlier. State security forces who kill civilians in the hunt for extremists have exacerbated the bloodshed, human rights groups say.

Extremists have even turned national parks into battle zones. In addition to the attack on the giraffe park in Niger, militants have rampaged through wildlife preserves in Burkina Faso, forcing rangers to abandon their posts. The violence has forced more than 600,000 people to flee their homes and destroyed or shuttered 3,600 schools, according to U.N. data.

Earlier this year, Islamic State and al-Qaeda groups in West Africa had shown signs of cooperating, or at least deconflicting, as their followers seek to carve up territory. The apparent detente has faded in recent months, as the groups increasingly regard one another as rivals, analysts say.

“ISIS and al-Qaeda in the region are fighting over the question, ‘Who can be the godfather of jihad in West Africa?’ ” said a North African counterterrorism official, who spoke on the condition of anonymity because he was not authorized to speak publicly.

On Africa’s southeastern coast, the rise of an Islamic State-linked insurgency has been equally dramatic. A group calling itself the Islamic State Central African Province has claimed responsibility for dozens of raids on towns and villages in northern Mozambique, including resort islands that are favorite haunts for international celebrities.

U.S. officials say the attack on Mocimboa da Praia in August involved a sophisticated, multipronged military assault by well-armed Islamists who outgunned and outmaneuvered the local government garrison, which abandoned the town and, six weeks later, had not yet returned.

The extremists have been able to exploit weaknesses in local governments that are ill-equipped to fight insurgencies that are well-armed and geographically dispersed. Traditionally, the United States has provided support for African counterterrorism units, including military advisers and Special Operations forces.

In November, the U.S. military began flying Reaper drones out of an air base in the desert region of Agadez in Niger. Hundreds of American soldiers work at the 17-acre facility, which took four years to build and cost roughly $110 million. The troops, alongside local partners, focus largely on surveillance and intelligence missions.

“We are working with our African and international partners to counter security threats in West Africa,” AFRICOM commander Gen. Stephen Townsend said when the base opened. “The construction of this base demonstrates our investment in our African partners and mutual security interests in the region.”

Yet Pentagon officials acknowledge they are now considering plans to pull out of West Africa, pending the results of an overseas posture review ordered by Defense Secretary Mark T. Esper.

West African leaders and European allies have urged the United States to stay, saying the intelligence and training that American soldiers provide is crucial to the fight against extremism. A drawdown would deal a “significant” blow to the effort, said a French military officer focused on the Sahel, who spoke on the condition of anonymity because he was not authorized to discuss the matter publicly.

In addition to weakening the fight against Islamists, the officer said, a pullout would mean the United States “will lose influence in Africa” at a time when China and Russia are rushing in fill the gap.

“Disengaging when all of West Africa is worried,” he said, “will be perceived as disinterest.”

Did you find apk for android? You can find new Free Android Games and apps.
Sharing is caring:
TERROR, world news, africa Africa, Terror, World News Comments Off on ISIS attacks surge in Africa even as Trump boasts of a ‘100-percent’ defeated caliphate Print this News