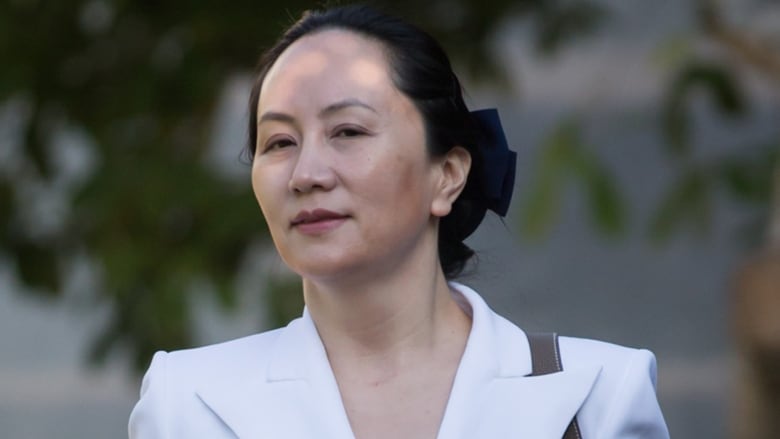 Huawei chief financial officer Meng Wanzhou has lost a federal court battle to unseal redactions — blacked-out portions — of CSIS documents relating to her arrest. A judge said the hidden information was not relevant to her arguments. (Darryl Dyck/Canadian Press)

A federal court judge has refused to give Meng Wanzhou access to sensitive information contained in reports about her arrest produced by Canada’s spy agency.

In a 35-page ruling released Tuesday, Judge Catherine Kane said the information that Canada’s attorney general is trying to keep from public view does not amount to the “missing pieces of the puzzle” the Huawei executive is seeking in an effort to prove that she was the victim of a conspiracy between Canadian and American law enforcement.

Kane’s ruling follows a week of hearings held in late July in relation to redactions — material blacked-out in Canadian Security Intelligence Service documents released to Meng’s lawyers as part of her battle against extradition to the United States.
Not even ‘marginally’ relevant

The CSIS situation reports were prepared in the days before and after the 48-year-old’s arrest at Vancouver International Airport on Dec. 1, 2018. The attorney general argued that certain details in the documents should be shielded from public view under provisions of the Canada Evidence Act dealing with national security and international relations.

But Kane said that, after reviewing the information at the heart of the case, she found that the details in question were not relevant to the arguments Meng hopes to make. 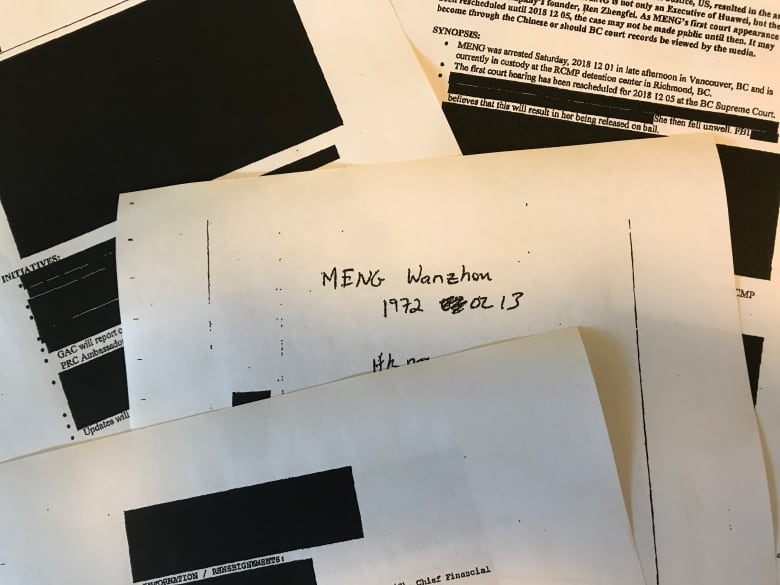 CSIS released these heavily redacted documents to lawyers for Meng Wanzhou as part of extradition proceedings. The Huawei executive’s legal team lost a battle in federal court to have the redactions lifted, (Jason Proctor/CBC)

The judge said Meng’s lawyers had argued that they were looking for information about the planning of the Huawei chief financial officer’s arrest, interagency co-operation, the execution of the arrest and evidence gathering. But none of that was contained in the blacked-out portions of the documents CSIS provided.

“The information does not provide the ‘missing pieces of the puzzle’ that Meng seeks,” Kane wrote.

“The redacted information does not respond to or illuminate the allegations of abuse of process and is not the type of information that counsel for Ms. Meng noted would be relevant.”

And even if it had been relevant, the judge said, she wouldn’t have been inclined to release it anyway.

“If any of the redacted information were marginally relevant — which it is not — the court would find that its disclosure would be injurious,” Kane said.
Accused of lying to banker

Meng is fighting extradition to the United States, where she is charged with fraud and conspiracy in relation to allegations that she lied to an HSBC banker about Huawei’s control of a company accused of violating U.S. economic sanctions against Iran.

Prosecutors claim that banks risked loss and prosecution by relying on Meng’s alleged lies to make decisions which saw them continuing to handle Huawei’s finances. 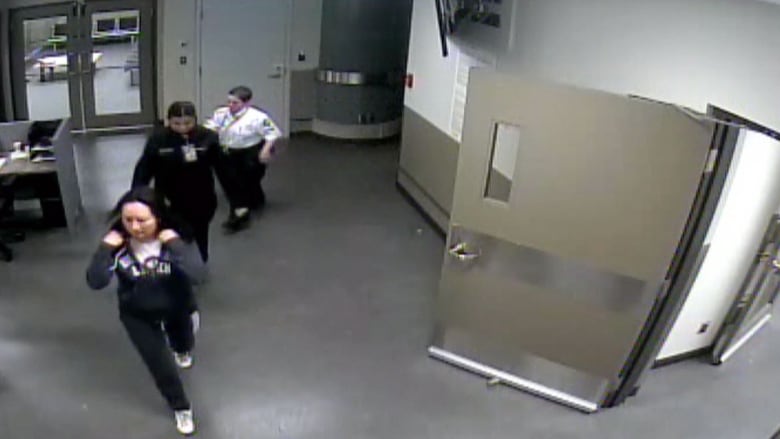 A still from a video of Meng Wanzhou filed as part of a defence application for access to documents. The video was taken during Meng’s first few hours in CBSA custody. (Court proceedings)

Next month, Meng’s lawyers plan to argue that the case should be tossed because Meng’s rights were violated at the time of her arrest. They claim that Canada Border Services Agency officers detained and questioned Meng without a lawyer, seizing her electronic devices and compelling her to give up the passcodes before her official arrest.

The defence team claims the RCMP then acted at the behest of the Federal Bureau of Investigation to gather and share technical information about Meng’s laptop, phones and tablets, in violation of the Extradition Act.

The Crown released six CSIS documents to the defence earlier this year in response to an order from Associate Chief Justice Heather Holmes, the B.C. Supreme Court judge overseeing the extradition case.

One day of federal court arguments over the redactions was held in public and the rest of the week’s hearings happened behind closed doors, with Meng’s attorneys excluded along with the public.

The attorney general had argued that releasing the hidden information could jeopardize Canada’s already damaged relationship with China and threaten the ability of CSIS to gather information from sources who trust that their identities won’t be revealed.
Decision on 37 more documents to come

Kane noted that the procedure to determine if sensitive details should be disclosed begins with a judge’s decision on the relevance of the information in the proceedings where it is intended to be used.

The Meng CSIS documents never cleared the first hurdle in the process, she said.

The decision comes as Holmes is considering similar questions about details kept from public view in 37 more CBSA, RCMP and Department of Justice documents.

The Crown has argued that the information in those documents is protected by privilege associated with communications between lawyers and their clients and public interest.

Meng will make her next appearance in court in Vancouver in September, when her lawyers are expected to argue that her rights have been breached.

She has denied the allegations against her and is currently living under a form of house arrest after being released on $10 million bail in the days after her arrest. She is required to wear an ankle monitoring bracelet and is trailed by round-the-clock security.