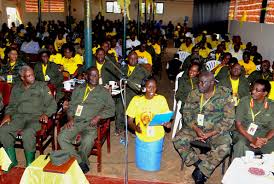 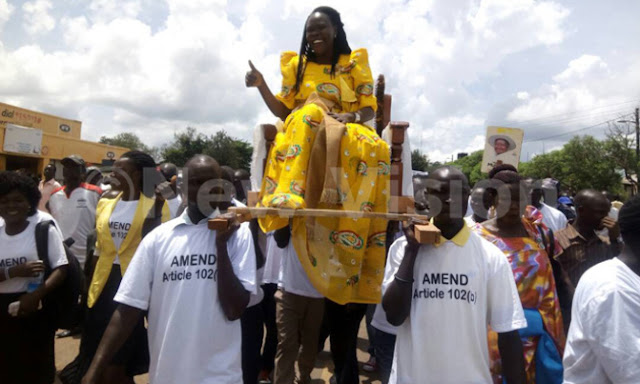 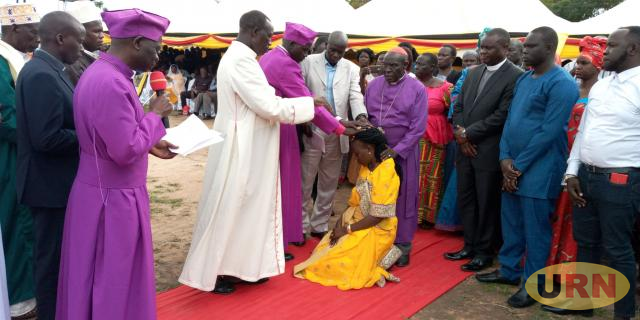 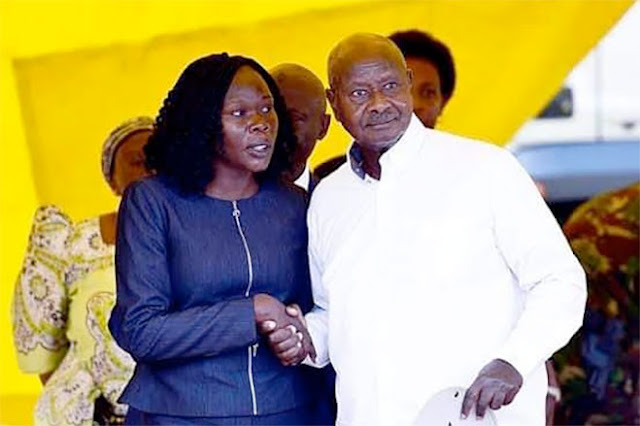 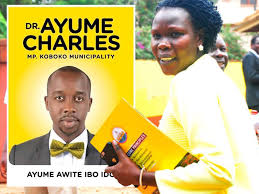 By CHANGE OF GUARDS
Evelyn Anite is a Member of Parliament for Koboko Municipality and Museveni’s Minister of State for Finance for Investment and privatisation. She came to prominence in February 2014 when, as a Member of Parliament for representing Northern Region, she was used at the NRM caucus retreat at Kyankwanzi to present the resolution that endorsed Museveni as the sole candidate for the party Chairmanship and flag-bearer for the February 2016 general elections. The development came amidst tension over fears that the then Prime Minister Amama Mbabazi was plotting to wrestle the party leadership from Museveni. Her picture kneeling on the floor while reading the said resolution to Museveni has left a permanent scar on the minds of many Ugandans. She labelled her fellow M.Ps who were opposed to the Museveni sole candidature as selfish hooligans. Immediately after, she claimed that the resolution was earning her death threats and her personal security was enhanced with armed bodyguards. As a reward, in March 2015, Museveni appointed her Minister of Youth Affairs.

In the February 2016 general elections, she won the Koboko Municipality parliamentary seat and Museveni appointed her Minister of State for Finance In charge of Investment and privatisation. In September 2017, she hit the headlines again during the controversial age limit constitutional amendment. She bragged that;
“… You cannot intimidate a ruling party. For them they are looking for support, but we are not. We are the party in government; we even have the support of the magye (army).”
Her reckless and arrogant statement amplified public hatred for her. Indeed, Museveni unleashed his army on Parliament and after beating up legislators, the said amendment was passed allowing him to qualify to contest for another round of the presidency.

Around August 2019, Anite was crying fowl that the ‘Mafias’ in government were plotting to kill her over her stand against alleged grabbing of national assets by the the powerful Regime cohorts. She threatened to reveal the full list of the said Mafias. Amidst that crisis she was seen being prayed for by religious leaders in her home area of West Nile for God’s protection. During the NRM primaries in August 2020, she was defeated by Dr. Charles Ayume for the parliamentary flag-bearer in a hotly contested race. She cried fowl claiming that Dr. Ayume was an opposition sponsored candidate, non residents had been ferried into the constituency from as far as Congo and Sudan and above all that she had been disadvantaged by Museveni’s last minute directive that allowed unregistered party members to vote. However she conceded defeat and unlike many of her colleagues, she is not running as an independent. Dr. Ayume had challenged her to dare run as an independent so that he defeats her again.

Dr. Charles Ayume is the son of the late Francis Ayume who had been the Speaker of Parliament (1998 – 2001) before he died in a mysteriously nasty road accident in 2014. The distinguished Lawyer, had earlier been the Solicitor General during the Iddi Amin and UNLF regimes (1977 – 1981) before he went on to become the Permanent Secretary in the Office of the Prime Minister (1984 – 1985), Secretary Office of the President (1985) and Secretary General of the Electoral Commission (1985). He also held several cabinet positions under the Museveni regime. His son had served in the health sector under Museveni’s State House for 15 years.

Going by the heckling and mockery that was directed at Evelyn Anite upon her defeat by Dr. Ayume, a majority Ugandans including those in her NRM camp seemed appeased by her loss. Though Museveni will most likely retain her in his post 2021 election, Ugandans are contented by the punishment that she got for her arrogance and opportunism. Since the opposition is struggling to get rid of such sycophants, it ought to honour the contribution of Dr. Ayume in getting rid of the most hated Evelyn Anite by not fronting any opposition candidate against him.

Did you find apk for android? You can find new Free Android Games and apps.
Sharing is caring:
politics, UGANDA, Gallery, Special Reports Uganda, Special Reports, Politics, Gallery Comments Off on HOW AND WHY UGANDA OPPOSITION SHOULD REWARD DR. AYUME FOR DEFEATING ANITE (photos) Print this News