GOLD: How 7.4 Tons of Venezuela’s Gold Landed in Africa—and Vanished

How 7.4 Tons of Venezuela’s Gold Landed in Africa—and Vanished


Secret deliveries to a refinery in Uganda expose a global underground economy many suspect is helping Nicolás Maduro cling to powerGold is refined at African Gold Refinery in Entebbe, Uganda.
By THE WALL STREET JOURNAL

ENTEBBE, Uganda—The government of Venezuelan President Nicolás Maduro is selling off his country’s gold reserves. Some of it has passed through a secretive operation in East Africa, a gambit that evades U.S. sanctions.

On two early-March flights, at least 7.4 tons of gold with a market value over $300 million moved from Venezuela to a refinery in Uganda, say officials in Venezuela and Uganda, a foreign diplomat and Venezuelan opposition lawmakers, who have concluded Mr. Maduro’s government exported the ingots.

The gold arrived on a Russian charter jetliner in two shipments at the international airport in Entebbe, says Ugandan national-police spokesman Fred Enanga. The accompanying paperwork identified the ingots, some with stamped labels partially scratched off, as Venezuelan central-bank property, says a senior Ugandan police officer who saw the bars and documents. Flight records show the trips originated in Caracas, Venezuela.

The shipments expose one link in a global underground economy many suspect is helping Mr. Maduro cling to power by bypassing the U.S.-dominated international finance system. Washington has recognized opposition leader Juan Guaidó as Venezuela’s legitimate president, slapped financial and other sanctions on Venezuelan officials and institutions,and threatened penalties for others doing business with the regime.

The standoff between the two leaders is reverberating beyond Venezuela, with some 50 countries joining the U.S. in backing Mr. Guaidó while others side with Mr. Maduro. What was once Latin America’s richest economy is starving, its oil sales have dwindled and citizens are suffering through dayslong power outages and shortages of basic goods.

Gold sales, U.S. and other officials say, are one of the government’s final financial lifelines.

The gold that arrived in Entebbe passed through African Gold Refinery Ltd., or AGR, in a compound about 500 yards from the old runway before being exported to the Middle East, Ugandan police say.

The refinery started operations in 2015. Some of the gold it processed was allegedly smuggled from conflict-torn eastern Congo and other African nations, according to officials with Ugandan police, the country’s Financial Intelligence Authority and regional smugglers.

Gold from AGR has made its way into supply chains at U.S. companies including General Motors Co. , General Electric Co. and Starbucks Corp. , the firms’ filings for 2018 with the Securities and Exchange Commission show, despite U.S. measures to discourage use of so-called conflict minerals from Congo.

Gilded Age
Uganda doesn’t mine much gold of its own, but the heavy metal has become its leading export.

READ The original Wall Street Journal article here:  https://www.wsj.com/articles/how-7-4-tons-of-venezuelas-gold-landed-in-africaand-vanished-11560867792
AGR General Manager Cherry Anne Dacdac says the company hasn’t processed smuggled or conflict gold and declines to comment on the March shipments. She says all AGR’s business is legal and that in a March 26 management meeting it agreed it won’t accept transactions related to Venezuela.

AGR has processed and exported more than 38 tons of gold since it started operations, Ms. Dacdac says. The scale of its operation helped drive gold in 2018 to overtake coffee as the leading export from Uganda, which mines little of it.

The refinery appears to act with support from Ugandan President Yoweri Museveni, court and other documents reviewed by the Journal suggest. A spokesman for Mr. Museveni says the president “backs the plant just as he does all other investors” in his quest to transform Uganda’s economy.

The Maduro government’s prior gold sales have been an open point of contention. Between late 2017 and Feb. 1, 2019, the central bank sold at least 73.3 tons of gold, with a market value of around $3 billion, to companies in the United Arab Emirates and Turkey, the National Assembly’s finance commission announced in February.

What should Washington do to prevent gold smuggling? Join the conversation below.

The White House on Nov. 1 announced sanctions intended to stop Venezuelan gold sales. Since then, several dozen more tons have been removed from the central bank and secretly exported, say opposition lawmakers and a person familiar with the bank’s reserves. The bank for weeks was left without power and water.

“It’s a fire sale,” says one of the lawmakers, Ángel Alvarado, who is on the finance commission. “The regime is scraping the barrel, selling off anything of value to keep itself afloat.”

Spokesmen for Venezuela’s central bank and Information Ministry didn’t respond to requests for comment. The Maduro government has said little publicly about its gold sales and routinely dismisses sanctions and accusations of wrongdoing as part of an international campaign to besmirch Caracas.
Mr. Goetz’s gold

AGR was founded in 2014 by Alain Goetz, 54, a Belgian businessman who has worked more than three decades in the African gold trade.

Gold is almost impossible to trace to its origin once refined. The United Nations says gold is the primary mineral financing militias and parts of the military in eastern Congo, funding a conflict that has killed millions.

Even before the Venezuelan shipments, AGR had drawn the scrutiny of Ugandan authorities for processing gold allegedly smuggled from conflict zones in Congo, as well as from South Sudan and Zimbabwe, much of which later leaves the country as Ugandan gold, according to Ugandan police, the country’s Financial Intelligence Authority, regional smugglers and Congolese mining officials.
Sydney Asubo, executive director of the Financial Intelligence Authority, Uganda’s government body in charge of combating money laundering, says the agency reported the smuggling activities to authorities and requested prosecution. No charges have been filed, he says, pending the conclusion of an investigation of AGR by Uganda’s Inspectorate of Government over suspicions of tax evasion, smuggling and money laundering. Ali Munira, a spokeswoman for the Inspectorate, which is charged with investigating corruption and other abuses, confirms there is an investigation but declined to comment on details.

Mr. Goetz and AGR’s Ms. Dacdac say they have complied with Ugandan and other laws. Mr. Goetz denies there are probes. Ms. Dacdac says she isn’t aware of any investigations by the Financial Intelligence Authority or Inspectorate.

America’s 2010 Dodd-Frank Act included provisions to discourage companies from using raw materials that finance the Congolese conflict by tracing what they buy. The act doesn’t make buying these materials illegal. AGR appeared in supply chains of 237 publicly traded U.S. companies in their filings for 2018.

On March 2, the red-tailed body of a Boeing 777 owned by a Russian charter company, Nordwind Airlines, touched down at Entebbe at 6:35 a.m. after taking off more than 13 hours earlier from Caracas, plane-tracking website Flightradar24 shows. Nordwind didn’t respond to requests for comment.

Police and private security gathered on the tarmac to receive the cargo from the jetliner, which carried no passengers, says a person who witnessed its arrival.

Airport handlers removed heavy parcels wrapped in brown cardboard, which didn’t pass through the airport’s regular customs procedures, says Mr. Enanga, the Ugandan police spokesman. Less than an hour after landing, the packages under a private-security escort reached the AGR compound just across the airport access road, he says.

Inside the cardboard were 3.8 tons of Venezuelan gold. Another 3.6 tons on the same airliner from Caracas arrived at the refinery two days later, Mr. Enanga says. By the time the police’s minerals unit, tipped off over the unusually large consignments, raided AGR on March 7, the first lot was gone, exported to the Middle East with its final destination listed as Turkey, he says.

Ugandan police seized the other 3.6 tons, ingots stamped with labels identifying them as Venezuelan central-bank property, says the senior officer who saw them. Some labels appeared scratched, as if someone had tried to disguise their origin, the officer says. Paperwork with the bars showed they were from the 1940s.

Mr. Goetz and AGR’s Ms. Dacdac say police never raided the refinery and never seized any gold. Ms. Dacdac says: “AGR presented all the necessary documentations as proof that the particular transactions have been declared and captured by the Uganda Revenue Authority.”

Precious Cargo
Venezuelan President Nicolás Maduro’s government is selling off his country’s gold reserves, some of which passed in March through a refinery near Uganda’s main airport, according to officials in Venezuela and Uganda. 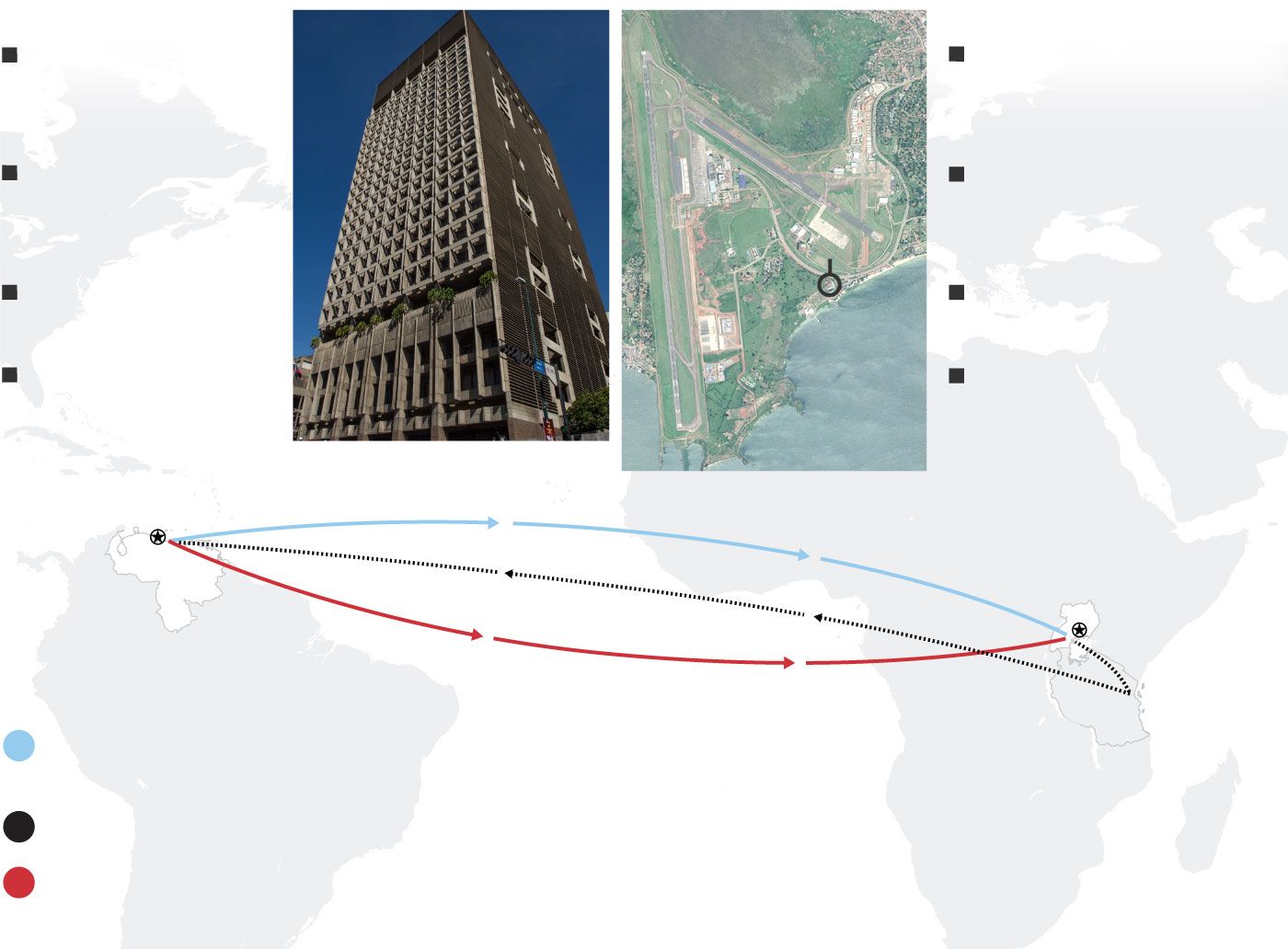 AGR says it ‘presented all the necessary documentations.’

No passengers on either flight.

in the early morning March 2 at Entebbe aiport.

Return flight: On March 2, the plane departs for Tanzania. On March 3, it returns to Caracas.

Shipment 2: On March 4, the plane departs Caracas, arriving in Entebbe

with another gold shipment.

It wasn’t the first time authorities identified Venezuelan gold handled by Mr. Goetz. Last year, Venezuela’s central bank was selling gold to three trading firms in Turkey and the United Arab Emirates, according to the February announcement by the Venezuelan parliament’s finance commission, including to Goetz Gold, which bought 21.9 tons.

Mr. Goetz says some of that particular Venezuelan gold passed through Goetz Gold but that it came from a company outside Venezuela and didn’t break U.S. sanctions because contracts were signed before Nov. 1.

After U.S. sanctions, the central bank’s buyers were drying up. In late January, as another Nordwind 777 sat at Caracas airport, Venezuelan opposition lawmaker José Guerra, a former economist at the central bank, alleged in parliament that the plane was there to fly out 20 tons of the bank’s gold.

The U.S. publicly pressured the bank’s buyers in Turkey and the U.A.E. “My advice to bankers, brokers, traders, facilitators, and other businesses,” a tweet from national security adviser John Bolton’s account warned on Jan. 30: “Don’t deal in gold, oil, or other Venezuelan commodities being stolen from the Venezuelan people by the Maduro mafia.”

Two days later, Abu Dhabi-based Noor Capital, which had previously bought 27.4 tons of Venezuelan gold, according to the Venezuelan parliament’s finance commission, announced it was stopping such purchases. Flightradar24 shows the Boeing 777 returned to Moscow.

Noor Capital declined to comment beyond a Feb. 1 statement confirming it had bought 3 tons of gold from Venezuela’s central bank on Jan. 21 and denying engaging in illegal actions.

Two months later in Uganda, as police say that the seized Entebbe gold shipment sat in custody, relief came from President Museveni. In a letter dated March 26, a copy of which the Journal reviewed, Uganda’s attorney general, William Byaruhanga, ordered the police minerals-protection unit to release the gold and withdraw officers from AGR.

The order to release the gold, Mr. Byaruhanga wrote in the letter, came from President Museveni, whom he said he had met the day before at State House in Entebbe. “AGR is instructed henceforth,” the letter said, to “cease and desist from any further importation of gold from Venezuela, until further notice,” citing U.S. sanctions.

Pressure on Uganda and AGR was rising from U.S. diplomats who had gotten wind of the shipments, says a person familiar with the pressure.

From there, the Venezuelan gold’s trace fades. Some time in March, two tons of gold were put up for sale in Turkey at a steep discount to market prices, say people familiar with the matter. The origin was listed as Uganda, but customs documents showed it came from Venezuela’s central-bank vault, one of them says.

Unable to find a buyer, a second attempt was made to sell the gold at a steeper discount, one of the people says, adding that it isn’t clear if anyone bought it. Mr. Goetz says Goetz Gold didn’t offer the Venezuelan gold for sale in Turkey.

There is a twist in the Venezuelan gold’s tale, says the person familiar with the central bank’s reserves: The bars almost certainly came from America in the 1940s, the person says, in payment to Venezuela for oil supplied during World War II. 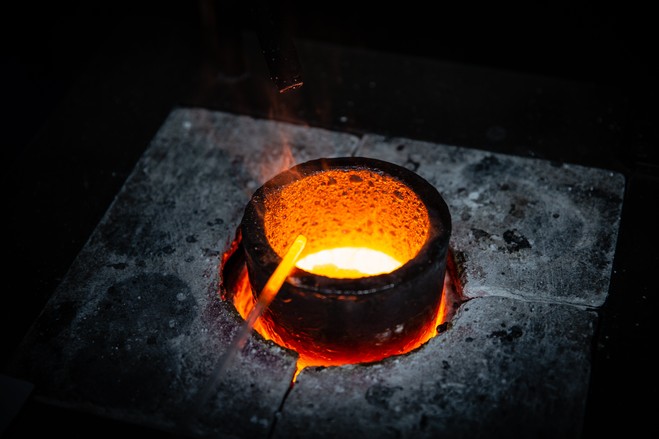 —Kejal Vyas in Caracas, David Gauthier-Villars in Istanbul, Robert Wall in London and Ian Talley in Washington contributed to this article.