This is a guest post by Valerie Haeder, a reference librarian in the Serial and Government Publications Division.

South Dakota’s Gladys Pyle was the first woman elected to the South Dakota House and South Dakota’s first female U.S. Senator. But she wouldn’t have cared about such distinctions as much as she did about getting things done. 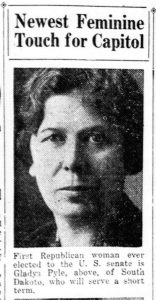 A native of Huron, South Dakota, Ms. Pyle graduated from Huron College and went on to be a teacher and school administrator.

For most of her life, Ms. Pyle lived in her family’s grand, Queen Anne style home that still stands in Huron as a museum and is on the National Register of Historic Places. Never married and without children, Ms. Pyle cared for her elderly mother, downsizing their living area and converting a small closet into a galley kitchen. The quarters were so tight it’s a wonder nothing caught fire. 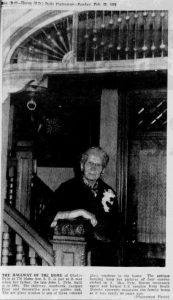 Image of Gladys Pyle in her home. The Daily Plainsman(Huron, SD), February 25, 1973. From NewspaperArchive.

Years after she wrapped up life in public service, she explained her reason for entering politics: “Why not?” As with so many frontierswomen who pioneered “firsts,” Gladys Pyle wasn’t interested in making headlines; she was interested in the common good. And allowing women to do what men do advanced the common good. She declared, “Women have as much right for a trial by their peers as men. Women have as much right to run for the legislature as men. If my brother can hang by his knees on a trapeze, so can I” (Kinyon, Jeannette and Jean Walz. The Incredible Gladys Pyle. Vermillion: Dakota Press, 1985. p.37). 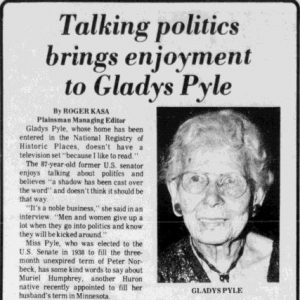 And with such spirit and determination, she launched campaigns for various political offices in South Dakota. As an “ultra modern young woman,” she ran an unsuccessful bid for governor at which point she departed from politics to focus on overseeing her family home. But politics drew her back.

While her time in Washington was short—she was elected to complete the late Senator Peter Norbeck’s term—Senator Pyle made quite a mark in Washington, gaining attention and stature in the media. Many newspapers of the day were charmed by Senator Pyle’s can-do, independent attitude.

When her senatorial career ended, Senator Pyle continued in public service. She returned to South Dakota, and in 1940 she was the first woman to nominate a presidential candidate at a national political convention. Later that decade in 1947, Ms. Pyle served with five other women on the South Dakota jury that first allowed women jurors. She fought for that right back in 1922 while a member of the South Dakota state legislature. 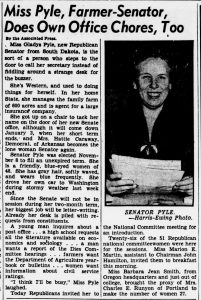 My interest in Gladys Pyle stems from the Forum of Famous Faces school project in which fifth and sixth grade students from across the Rapid City, South Dakota, elementary schools participated. I researched and portrayed Gladys Pyle. My father drove me across South Dakota during the cold, bleak February of 1989 to interview Senator Pyle, who at 98 was frail and alone in a Huron nursing home. Ms. Pyle was hunched over but delighted to sign in shaky cursive a copy of The Incredible Gladys Pyle, a book by two South Dakota women who wanted to document Ms. Pyle’s trailblazing life. Two weeks after our visit Gladys Pyle died.