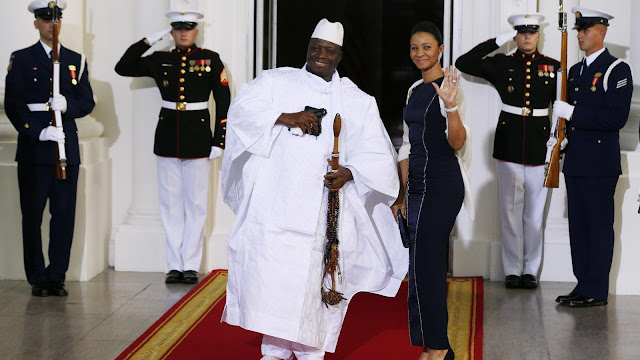 BANJUL, Gambia (Associated Press) — Gambia’s justice minister said Friday that former dictator Yahya Jammeh should be charged with theft and other forms of economic crimes as a result of a newly released economic inquiry into the former government.

“The damage former President Jammeh has caused to government institutions, public resources and state-owned enterprises is of such serious nature that the government ought to introduce a motion before the National Assembly for charges to be brought against him for theft, economic crimes and corruption,” Justice Minister Aboubacarr Tambadou told journalists.

He spoke after the release of a nine-volume report from a commission that investigated the financial activities of public bodies, enterprises and offices and their dealings with Jammeh during his rule.

Led by veteran lawyer Surahata Janneh, the three-member inquiry panel was sworn into office in July 2017. It held public hearings punctuated by startling revelations about the economic crimes under the watch of Jammeh, who ruled the small West African nation for more than 22 years. He lost the presidential election in December 2016 and fled into exile to Equatorial Guinea the next month.

A report released in March by another investigative group said Jammeh stole $1 billion during his two-decade rule of fear. The Organized Crime and Corruption Reporting Project suggested Jammeh is able to have a golden exile in Equatorial Guinea because of the huge amount of money he looted.

Before the economic inquiry commission was established, a report by Gambia’s government said investigations showed that Jammeh had accumulated at least 131 properties registered in his name or in companies or foundations in which he had shares or an interest. Jammeh also had up to 89 private bank accounts tied to those foundations and companies, the report said.

The motion to bring charges will be submitted to the National Assembly, which has the final authority to decide whether Jammeh should face justice.

“As the evidence shows, ex-President Jammeh misappropriated and diverted resources including grants, donations and loans and so on meant for the Gambian people particularly through his private companies, particularly Kanilai Group International (KGI), and Kanilai Family Farms (KFF),” according to the inquiry commission’s report seen by The Associated Press. The report says Kanilai Family Farms was set up on Oct. 14, 1998, and Jammeh owns 99% of its shares.

Tambadou, the justice minister, said Friday that bank accounts “directly controlled and expended by former President Jammeh or on his instructions” were opened to receive funds paid by members of the public and intended for the government.

In a response to the inquiry seen by AP, Gambia’s government decried that “disproportionate amounts of resources were wasted, misappropriated and diverted during the 22 years of former President Jammeh’s government.”

« UGANDA: I work on orders from Museveni – Kayihura (Previous News)
(Next News) PRONOUNS: Use of the words he/she, him/her and his/hers etc. »