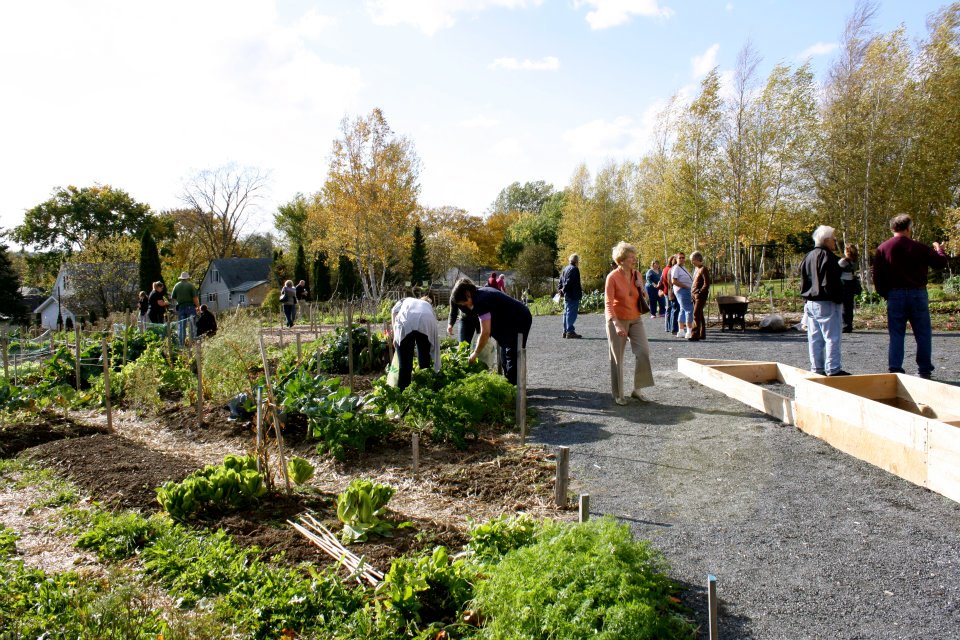 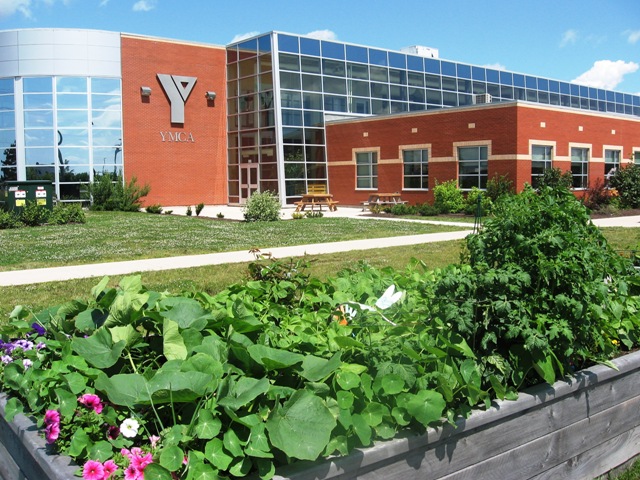 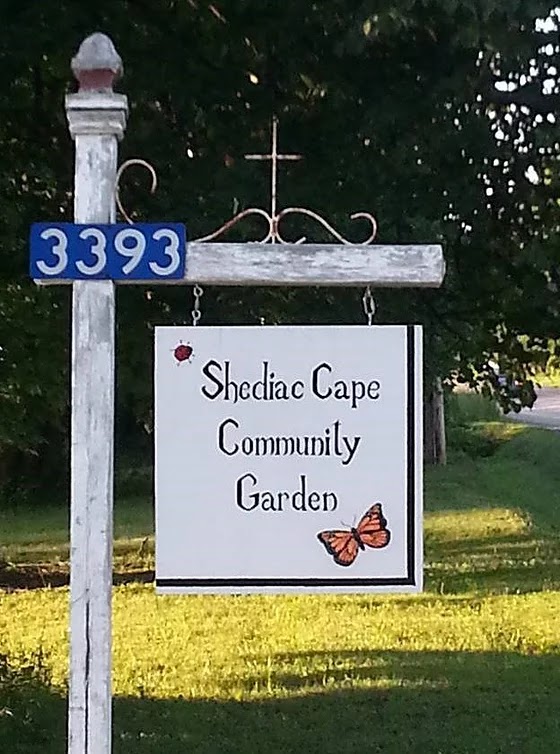 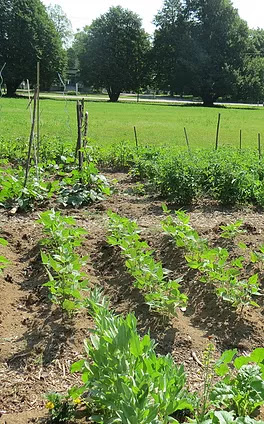 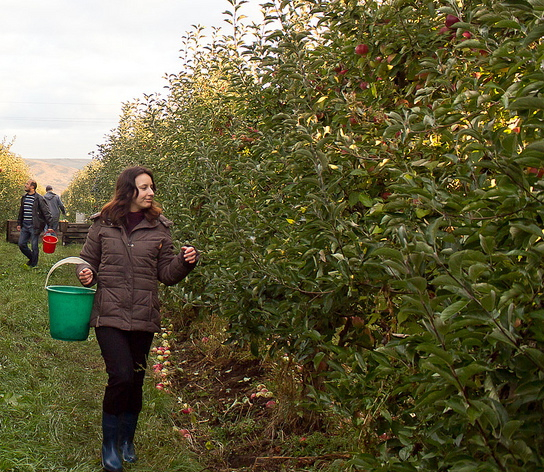 The City of Moncton has a Community Garden. Anyone can grow food in it.

My own Parish of Shediac also has a Community Garden.

People who live in apartments can grow food in the Community Gardens.

Beats me why Ugandans do not grow food.

Into the woods: Seattle plants a public food forest

There’s a stretch of arterial in Seattle’s Beacon Hill neighborhood that I’ve traveled probably thousands of times without giving a second thought to the empty, grassy hillside it parallels. When I heard about plans to create a seven-acre urban food forest there, I had a hard time picturing the sloped field covered over in rich soil and filled with a tangle of fruit and nut trees, berry bushes, and vegetable patches. It seemed like an edible ecosystem too wild to spring from such an unremarkable urban space. But within the next few years, this slice of land adjacent to a city park and golf course will transform from an unofficial off-leash dog run and occasional sledding slope into the Beacon Food Forest, which some say will be the largest of its kind in the U.S.

Food forests are shaping up to be the next evolution of urban farming. “A food forest is more of a perennial garden; it’s a land management system that’s based on the natural system of a forest,” said Glenn Herlihy. He designed the original plans for the BFF with classmates in a permaculture course in 2009, and, as part of a volunteer steering committee called the Friends of Beacon Food Forest, has been actively involved in nudging it to fruition ever since. While a farm or garden typically comprises rows of annual crops that require a fair amount of hands-on upkeep, a food forest incorporates trees, shrubs, and mostly perennial plants in a way that “mimics the architecture and beneficial relationships between plants and animals found in a natural ecosystem,” according to the Permaculture Institute.

“It’s catching on really fast, this food forest idea,” Herlihy said. “Many people are putting it in their own gardens. I’d been gardening that way my entire life, I just didn’t know what to call it.”

The idea of planting perennials as part of a self-sustaining, holistic system is old hat to many accomplished gardeners. And groups around the country like the Boston Tree Party, San Francisco’s Urban Orchard Project, and City Fruit in Seattle are already dedicated to planting and harvesting from urban fruit trees and orchards. But creating a system on public land that combines the concepts of urban farms, orchards, and natural forest, and depending on collaborative community effort to keep it going, represents uncharted territory for the now-flourishing urban-farming movement.

The future site of the Beacon Food Forest.

The BFF falls under the administrative umbrella of the P-Patch program. As with the neighborhood gardens, individuals and families will be able to purchase garden plots in the BFF for a small yearly fee, with the expectation that they’ll also contribute to the creation of the greater forest. Eventually, the goal is for BFF’s seven acres to be filled with garden plots, fruit and nut trees, community play fields, a kids’ area, a wetland, a community gathering spot, and an area devoted to native plants, including “craft-minded” species like willows and dogwoods ideal for traditional basket weaving. A local beekeeper will also keep hives onsite, providing the diverse array of plants with natural pollinators.

Ideally, a food forest’s more self-sufficient ecosystem would make it “an easier and less labor-intensive method for public gardening,” Herlihy said. But that method of collective urban agriculture remains untested on a widespread scale, and, Raymond cautioned, isn’t necessarily simpler.

“Working in a collaborative model requires a different sort of engagement, sometimes a higher level of involvement, than if a space is divided up and people steward their own area,” she said.

Plans for the food forest’s final layout (click to enlarge).

A requirement for more intense engagement could mesh perfectly with the Friends of Beacon Food Forest’s commitment to making education a part of the BFF’s mission. Herlihy said they’re looking at ways to partner with the nearby middle school, high school, and Veterans Affairs Medical Center — possibly by putting in wheelchair-accessible paths so hospital patients can garden, too. The BFF could be many things to the community — a food source, a place to grow culturally significant flowers and herbs, a learning space, or simply a place to stroll — and that wealth of possibility presents both a challenge and an exciting opportunity.

“This neighborhood is quite ethnically and culturally diverse,” Raymond said. She and other community members are considering how “all those different cultures [can] participate and see something of themselves reflected.” In some ways, the very nature of permaculture — which looks to bring together plants from far-flung places that can work together in new ways — reflects the way a diverse community functions at its best.

The BFF breaks ground this year with the help of a $100,000 grant through the Parks and Green Spaces Levy, a $146-million initiative approved by Seattle voters in 2008, part of which goes to support community gardens. Some of the forest’s budget will be dedicated to outreach among Beacon Hill’s multicultural residents, many of whom are new immigrants. The bulk of the funding will cover the grading, structural development, and finally, planting of the forest’s first 1.75 acres. The grant expires at the end of the year, increasing the incentive to hit the ground running.

“Within the next year, [the BFF] will sort of find its groove,” Herlihy said. “We would like to have people growing stuff by the end of this year.”

Making the BFF a reality involved jumping through some bureaucratic hoops, given the special nature of its site. The empty field where the food forest will soon be actually sits adjacent to one of two reservoirs that were moved underground due to national security concerns after 9/11. The land belongs to Seattle Public Utilities but will be managed by the P-Patch program, under the Department of Neighborhoods.

Both Herlihy and Raymond stress that despite the practical hassle of negotiating an agreement between city agencies to support an unprecedented, ambitious project, they’ve felt nothing but positive encouragement from Seattle government. “We have found an unbelievable amount of support … everywhere from the city council to the mayor’s office to city departments,” Herlihy said.

It also helps that North Beacon Hill had already been identified as a priority area for expanding community gardening.

Not every city has such a friendly attitude toward urban agriculture, though recent popular outrage over urban gardeners faced with jail time has helped draw attention to the need for policy that’s aligned with this national case of gardening fever. Seattle’s P-Patch program already provides a successful example of the good that comes out of government support for urban gardening. And if the BFF takes off, it could inspire urban food policy to embrace food forests elsewhere.

Friends of Beacon Food Forest says an added inspiration to move forward on the plan came when it heard that the site was being looked at as a potential parking lot for users of the adjacent park’s golf course, tennis courts, and playfields. Unfortunately for those who drive, the forest was approved. And, Herlihy says, the limited parking in the area “is just going to have to encourage people to use other forms of transportation.”

Of course some disgruntled would-be drivers might feel better if they can pick some fruit fresh from the forest after their games.

Did you find apk for android? You can find new Free Android Games and apps.
Sharing is caring:
farming, Opinion Farming, Opinion Comments Off on FARMING: Grow foodfor health and wealth Print this News