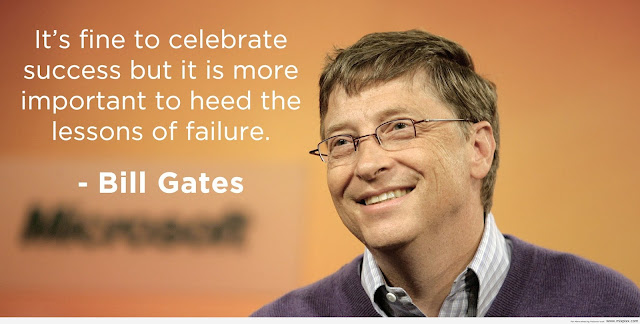 Courage is certainly required in this life. I say this because failure is such a huge part of living—it happens to us all. So, is there a lesson to be learned from failure?


Successful people seem to think so. Edison once said that it was “ten thousand failures” that led to the final success of a working light bulb. Therein lies a lesson about failure: keep moving forward regardless of failure or number of failed attempts. Here are 10 more great lessons about failure from the mouths of successful people.

1. Accept failure, but keep trying.
Michael Jordan once said that, “I can accept failure, everyone fails at something. But I can’t accept not trying.” Failure then becomes a means to an end, rather than an end in and of itself. In other words, failure is a part of the journey toward success. Everyone fails at one time or another, the courage part comes in continuing to try.

2. Continue forward in spite of failure.
Walt Disney was fired because he “lacked imagination and had no good ideas.” Here is the man responsible for an empire of imaginative movies and play for children the world over, and yet, he lost his job due to a lack of imagination. The lesson here is to keep moving toward that end goal, even when other people fail to see the same vision.


3. Success or failure is dependent upon whether or not you keep at it.
Babe Ruth said that, “Every strike brings me closer to the next home run.” This lesson is similar to Edison’s remark about his light bulb. Like it or not failure is the very engine of success, moving us one step closer to a successful conclusion. Of course, this also means that you have to keep going and not quit in attempting to achieve your goal.

4. Sometimes failure simply means changing direction.
Love Ben & Jerry ice cream? So do I. Here were a couple of guys that had completely different directions for their lives and still managed to become admirably successful. Mr. Ben Cohen dropped out of college, while Mr. Jerry Greenfield failed to get into medical school, and both managed to become and remain wildly successful.

5. Believe in yourself.
Not everyone is going to “get you.” Elvis Presley, Lucille Ball, and Carol Burnett were all told to pack it in and go home due to their “astounding” lack of talent. Yet, can you imagine a world without their music and humor? Success begins through believing in what you can do. Don’t let other people discourage you in your path toward success.

6. Failure is a chance to learn.
Henry Ford is quoted as saying, “Failure is simply the opportunity to begin again, this time more intelligently.” Certainly, Edison would agree. You’ve just learned all the wrong ways toward that particular success, as Edison did with his “ten thousand” wrong attempts. Every lesson learned, every failure, is a movement in the right direction.
7. Attitude about failure can make all the difference.
“Success is the ability to go from failure to failure without losing your enthusiasm,” said Sir Winston Churchill. England was at a great disadvantage with the advent of World War II. Here is a prime example of tiny David against mighty Goliath. Churchill’s enthusiastic belief in England’s defense was a part of the turning point for that country in the war.

8. Courage must be your watchword.
“If you have made mistakes, even serious ones, there is always another chance for you. What we call failure is not the falling down but the staying down,” a quote from Mary Pickford. We are all quite capable of spectacular mistakes and some of us, myself included, have made them. The key is to not allow defeat and failure to be the end-all. You must continue forward.

9. Don’t give up.
“For every failure, there’s an alternative course of action. You just have to find it. When you come to a road block, take a detour,” a quote from Mary Kay Ash. She was the founder of the very successful home business for leading cosmetics. Perhaps, the lesson of the failure is that there may be a better or a different way to achieve your goal.
10. Success can only grow from failure.
Benjamin Disraeli, a former British Prime Minister said, “All my successes have been built on my failures.” Indeed, failure is only a tipping point when one is on the road to success. Without failure, we as humans don’t learn and our movement toward success is stagnated. Let failure guide you toward success instead of becoming the stopping point.
READ ORIGINAL ARTICLE AT:  https://www.lifehack.org/articles/communication/10-great-lessons-highly-successful-people-have-learned-from-failure.html

UGANDA: Graduate, what is next? – Job Search