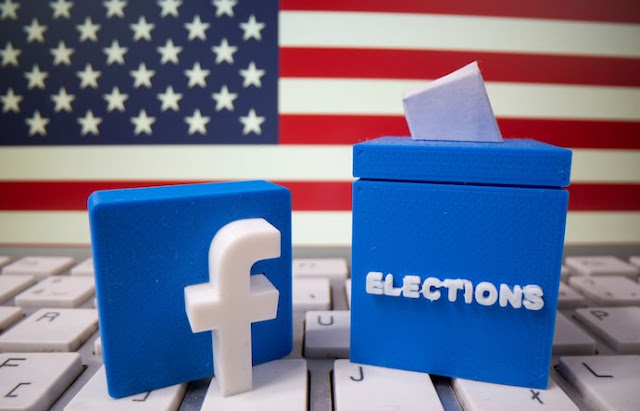 Facebook said it plans to temporarily suspend all political and issue-based advertising after polls close Nov. 3, a move the company said was intended to limit confusion, misinformation and abuse of its services in the days after the presidential election.

The social media giant also said it would remove calls for people to watch the polls when those posts use militaristic or intimidating language. Executives said that the policy applies to anyone, including President Trump and other politicians. Trump has made calls for people to engage in poll-watching, and his son Donald Trump Jr. appeared in an ad last month urging people to “defend your ballot” and join an “army” to protect the polls.

Facebook executives said such language, including the words “army” and “battle” would be prohibited in the future, but the ad will not be removed retroactively.

The moves by Facebook come in the face of criticism that the company’s policy to not fact-check political ads has created a loophole for misinformation that has been repeatedly exploited. The company has previously said it will suspend running new political ads in the week before the election but will allow ads that have previously been approved to continue running.

Trump has refused to commit to a peaceful transfer of power after the election. His power to use his megaphone to dispute the results of the election is one of 70 scenarios that company has planned for since last year, Facebook’s head of security policy, Nathaniel Gleicher, said in an interview.

To combat that possibility, the company has said it will send out notifications on election night on Facebook and Instagram to share the latest results, in partnership with Reuters. If a presidential candidate or party declares premature victory, the company will apply labels to posts saying that the counting is still continuing or will label the post with the name of the winner.

“We believe we’ve done more than other company” to combat misinformation and foreign interference since 2016, Guy Rosen, Facebook’s vice president for integrity, said on a media call. “We thought it was appropriate to introduce these new measures as we head into the final stretch.”

The company also said it has removed more than 120,000 posts on Facebook and Instagram between March and September in the United States for violating the company’s voter interference policies and has placed labels on 150 million pieces of content that have been debunked by the company’s third-party fact-checkers.

The company’s policies prohibit representations about voting such as “I hear anybody with a driver’s license will get a ballot,” executives said.

Gleicher said the company was also preparing for a “hack-and-leak” scenario along the lines of Russian-backed Wikileaks dump of the emails of Hillary Clinton campaign campaign chair John Podesta in 2016. He said they had not seen this activity, but “we should all be ready in case they or others try again.”

He added that the company would remove leaked material and coverage of such leaks by state media entities.

« Pence, Harris teams at odds over plexiglass at debate (Previous News)
(Next News) Wikipedia article of the day for October 8, 2020 Florin (British coin) »