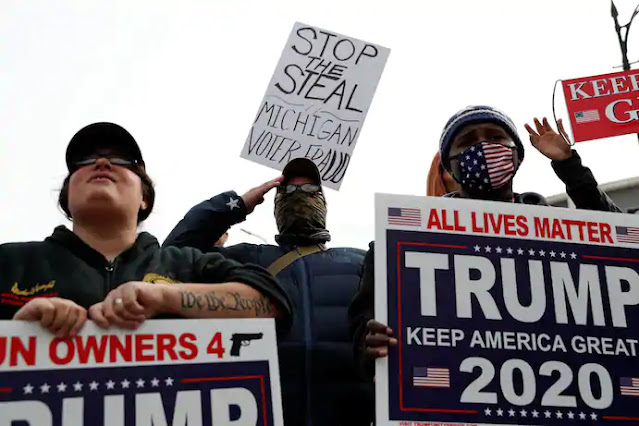 By Tony Romm and Isaac Stanley-Becker, THE WASHINGTON POST
The group, which had attracted more than 360,000 members, was among widespread efforts by conservative activists to spark protests challenging the legitimacy of the election.
President Trump’s allies have turned to Facebook and other social-media sites in an effort to spark nationwide protests against the 2020 election, thrusting some of Silicon Valley’s most powerful organizing tools into a contest over the legitimacy of American democracy.

The campaign and its aides have relied on a network of new and existing Facebook pages, groups and events — some of which have garnered hundreds of thousands of members — to rally people in public this week around a baseless conspiracy theory that Democratic candidate Joe Biden is attempting to “steal” the election. Some of the efforts promoted in places like Pennsylvania and Arizona specifically target vote-counting centers, threatening disruptions while ballot tallying is still underway.

The online efforts have unfolded not on the Republican Party’s fringes but well within its mainstream. Among the most vocal leaders is Amy Kremer, a former congressional candidate in Georgia and a co-founder and co-chair of Women for Trump. She used a Facebook page called Women for America First, which boasts more than 100,000 followers, to drive users to a newly launched Facebook group called “STOP THE STEAL,” which garnered more than 360,000 members before Facebook removed it midday Thursday for violating the platform’s rules.

“We need boots on the ground to protect the integrity of the vote,” the Facebook page said before it disappeared from view, encouraging people to donate to help pay for “flights and hotels to send people” to battleground states including Georgia, North Carolina and Pennsylvania. The “STOP THE STEAL” group also had been listed as a co-host on 12 different Facebook protest events, including a new car “caravan” planned in California, though some of the events say the goal is to be peaceful.

Some of the commentary that spilled forth in the “STOP THE STEAL” group veered into planning for armed conflict. “We are on the verge of civil war due to those types of people,” one user wrote. “You cannot reason with them or convince them to stop and reunite as they are dead set on total destruction of our nation. So I ask you, what are you prepared to do?” Another asked, “how do we go about overthrowing the government?” Hundreds of users replied, with one proclaiming, “Civil war!”

The anti-democratic resentment ultimately resulted in disciplinary action from Facebook, where spokesman Andy Stone pointed to the “exceptional measures that we are taking during this period of heightened tension.” Anticipating a crackdown, some of the group’s members preemptively shifted their discussions to MeWe, a messaging app favored by militia groups who previously had been banned by Facebook.

“The group was organized around the delegitimization of the election process, and we saw worrying calls for violence from some members of the group,” Stone said in a statement.

The effort uses the same mantra, “stop the steal,” employed by Roger Stone for a political action committee he led in 2016. Stone, a self-described “dirty trickster” whose prison sentence Trump commuted this summer, was recently kicked off Facebook after the company said he was tied to a network of fake accounts.

Chris Barron, a spokesman for Kremer, denounced Facebook, saying the group’s swelling membership “spoke volumes about how concerned people are.” Other administrators of the group included a conservative activist who identifies herself on Facebook as the communications director for We Build the Wall, the nonprofit that raised more than $25 million for the purported aim of erecting a barrier along the Mexican border.

Associated websites were soliciting donations and contact information. Domain records showed at least one such site, created on Nov. 4, was registered by Scott Graves, who runs a California-based digital agency. He did not immediately respond to a request for comment.

On Nov. 4, protestors shouted and banged on the windows of a Detroit vote counting center after Trump called for a halt to the process. (Meg Kelly, Sarah Cahlan/The Washington Post)

The protests that have occurred nationwide so far have attracted vocal yet mostly orderly crowds of angry Trump supporters, though at times their presence has stoked tensions. Armed protesters appeared on Wednesday evening at a ballot-counting center in Maricopa County, one of the places in Arizona giving Biden an edge, demanding a halt to their work in response to a widely disproven social-media hoax about magic markers and discarded ballots.

The dilemma is especially acute for Facebook at a moment when the election remains undecided. The social-media site is one of the most potent tools for people hoping to organize and exercise their rights to protest worldwide. But that power has been put to use in more controversial ways since polls closed on Tuesday, allowing Trump, his family members and a network of well-funded conservative groups to sow disinformation and potentially undermine Americans’ faith in the electoral process.

After years of resistance, Facebook has more aggressively sought to police problematic posts, photos and videos across its services, aiming to prevent misinformation from marring the 2020 presidential race as it did four years ago. But Facebook at times has been slow to act, taking about 12 hours in one instance to remove a Facebook page called “Stand up Michigan” that appeared after a group operated by the same users had been banned because of what the platform said was the risk of “offline harm” involved in its calls to swarm a Detroit tabulation center. “They can remove our content but will never silence our VOICES!” the page proclaimed before it was booted by around noon on Thursday.

The same tabulation center was targeted in additional posts alleging attempted theft, including in a Facebook group counting among its administrators Meshawn Maddock, a district GOP chairwoman in Michigan who helped organize protests against stay-at-home orders earlier this year. Maddock did not immediately respond to a request for comment.

The proliferation of protests decrying alleged fraud represent a show of force by pro-Trump media, which worked in tandem with conservative advocacy groups to spread word of the street actions. Donald Trump Jr., the president’s son, shared details about a Pennsylvania protest where an organizer told prospective participants to “be prepared to stay for as long as possible.” The Gateway Pundit website provided a calendar of scheduled rallies. The website for the War Room: Pandemic podcast run by Steve Bannon, Trump’s former 2016 campaign manager, speculated about whether it was “Game-on for the Coup?” and told visitors, “The Fight is Now,” as it provided a link to protests organized by FreedomWorks.

The Tea Party Patriots shared details about those FreedomWorks-backed protests and other efforts with its 1.3 million Facebook followers late Wednesday. “Arizona, Pennsylvania, Michigan and Georgia hang in the balance and with them, the Presidency,” the Tea Party Patriots wrote. “Our future depends on the American people rallying to Protect the Vote and Stop the Steal!”

Peter Vicenzi, a spokesman for FreedomWorks, defended conservatives’ efforts Thursday. “Any implication that these demonstrations aren’t a legitimate activity is offensive, since this is their civic duty to ensure that we have a free and fair election,” he said in a statement.

Protests in particular long have vexed Facebook. Russian agents who weaponized the site in the 2016 race relied on Facebook events to stir up real-world tensions. The coronavirus pandemic exposed these vulnerabilities once again, after conservative organizers — some with ties to Trump and his campaign — tapped the platform in an attempt to rally people against state public-health restrictions. Facebook ultimately ended up incubating some of the tensest demonstrations across the country, including in Michigan, later resulting in the arrest of three individuals who targeted the state’s Democratic governor, Gretchen Whitmer.

A.J. Bauer, a visiting assistant professor in New York University’s department of media, culture and communication, said some of the protest activity on Facebook does not reflect an organic groundswell of support but the work of a “tightly networked set of Trump-orbit” influencers, including on the photo-sharing app Instagram, which Facebook also owns.

“They need something to queue up their relevance in the event Trump loses,” Bauer said, “and they’re leaning into grievances about the election being stolen.”