But Regeneron’s antibody treatment is expected to be in short supply. 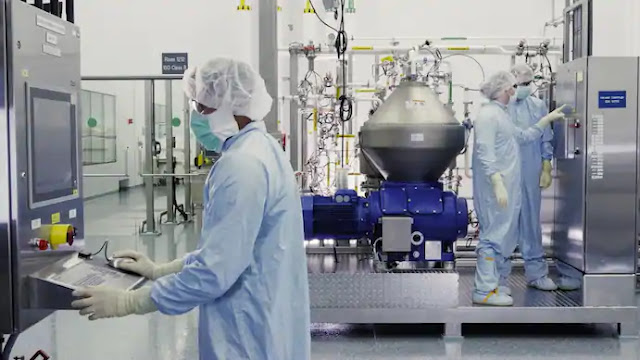 The Food and Drug Administration on Saturday granted emergency authorization to the experimental antibody treatment given to President Trump last month when he developed covid-19, the disease caused by the coronavirus.

The drug, made by Regeneron Pharmaceuticals, is designed to prevent infected people from developing severe illness. Instead of waiting for the body to develop its own protective immune response, the drug imitates the body’s natural defenses. It is the second drug of this type — called a monoclonal antibody — to be cleared for covid-19. The FDA authorized Eli Lilly & Co.’s drug on Nov. 9.

Regeneron’s drug is a cocktail of two monoclonal antibodies, called casirivimab and imdevimab. The FDA said in authorizing the cocktail that the drugs may be effective treating mild to moderate covid-19 in adults and children aged 12 or older, and are indicated for those at high risk of developing severe illness. Doctors hope the drugs will keep those patients from being hospitalized.

But as with the Lilly treatment, the Regeneron drug is a biological product that is complicated and time-consuming to make; initially, it will be in short supply. The shortages, coupled with the complexities of administering the intravenous medication, have raised concerns about whether people with the greatest need will be able to get it.

Regeneron executives said at its earnings call in early November that the company projects having enough doses for 80,000 patients by the end of November and 300,000 total doses by the end of January.

Trump received an infusion of Regeneron’s investigational drug — a cocktail of two antibodies — on Oct. 2 after he was diagnosed with covid-19 and began showing symptoms. He received the drug through a compassionate use program, also called expanded access, that allows people to get unapproved drugs. Chris Christie, the former Republican governor of New Jersey who also had covid-19, received access to the Lilly drug, called bamlanivimab.

In tweets and videos after he was released from the hospital, Trump inaccurately described the Regeneron drug as a cure and pressed the FDA to quickly clear the medication. It was several weeks, however, before the agency took action.

Monoclonal antibodies, which are concocted in laboratories, are proteins that mimic the immune system’s ability to attack the virus. Regeneron’s covid-19 drug is manufactured in cells from genetically engineered hamsters cells.

In a study published on Oct. 28 in the New England Journal of Medicine, researchers said the Lilly cocktail lowered the risk of follow-up medical visits and reduced levels of virus in people with mild to moderate symptoms for covid-19.

The progress on monoclonal antibodies comes as pharmaceutical and biotech companies are racing to produce coronavirus vaccines. Pfizer and Moderna might get emergency clearance for their vaccines by year’s end; Pfizer applied for FDA authorization on Friday. But it will take months to vaccinate the population of the United States, much less the world, and the shots may not work for everyone. In any case, antibody treatments can play an important role in making the disease less dangerous.

If the pandemic keeps raging, however, there won’t be enough of the antibody treatments for everyone who might benefit from them. Unlike conventional pills, these drugs are synthesized by living organisms in specialized reactors, at a biological pace that can’t be rushed. A worldwide scramble to find capacity to make the drugs is underway, with companies striking deals with competitors to increase their manufacturing capabilities.

Through Operation Warp Speed, the Trump administration effort to speed up treatments and vaccines, the government has bought 300,000 doses each from Lilly and Regeneron at a cost of about $1,250 and $1,500 per dose, respectively, with an option to buy hundreds of thousands of doses more. But that comes as the nation is approaching 200,000 new coronavirus cases each day.

But in a sign of how quickly the supply could be used up as the pandemic surges across the country, 40 percent of the doses of Lilly’s bamlanivimab has already been allocated to states. In just two weeks, the U.S. government has already allocated nearly 120,000 of the 300,000 doses.

Because of the limited supply, the number of doses each state receives will be determined by the number of confirmed cases and hospitalizations in a given week, federal officials said.

In a recent briefing, Health and Human Services Secretary Alex Azar said the antibody treatments have “the potential to save thousands of lives and significantly reduce the disease’s burden on the health-care system.”

Where the antibody drugs will be administered is not clear, particularly because patients will be contagious and can’t be given the drug at established infusion clinics alongside patients with compromised immune systems.

“You can’t send them to places where cancer patients are being treated,” said Mark McClellan, director of the Duke-Margolis Center for Health Policy and a former FDA commissioner. He said that many hospital systems have extra space they could dedicate to the antibody treatments, or could set up pop-up centers. Home-infusion providers such as CVS could administer the drug in nursing homes and people’s residences, he said.

Because of the expected shortages, doctors have expressed concerns that the medicines won’t be equitably distributed, or, find their way to patients who need them the most, especially in disadvantaged communities.

Trump administration officials, at the recent briefing, promised to fairly and swiftly distribute the treatment, basing distribution on a strategy similar to what is used for remdesivir, an antiviral drug for hospitalized patients. The administration’s rollout of remdesivir was plagued by problems in its early phases. Doctors reported a confusing and unfair process, marred by incomplete medical information. Some doses went to the wrong hospitals, to hospitals with no intensive care units and therefore no eligible patients, and to facilities without the needed refrigeration for storage, meaning some doses were returned to the government

Trump administration officials said they had learned from those mistakes.

— William Wan contributed to this report.

Did you find apk for android? You can find new Free Android Games and apps.
Sharing is caring:
world news, Covid-19 Covid-19, World News Comments Off on Experimental drug given to Trump to treat covid-19 wins FDA clearance Print this News

« CANADA: Pandemic lockdown Day Whatever (but it is coming to nearly a year) (Previous News)
(Next News) Corey Hart – Everything In My Heart (Official Music Video) »

LIVE:Situation in Amsterdam as First Curfew Since WWII Imposed to Curb Spread of COVID-19 (VIDEO)