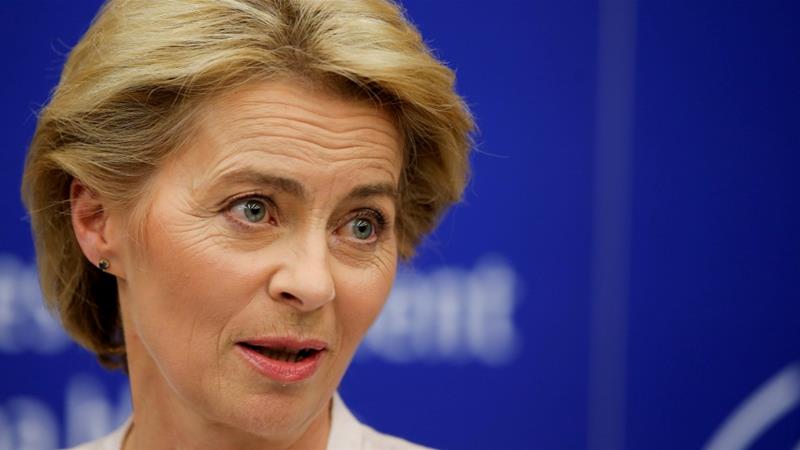 Incoming European Commission chief Ursula von der Leyen said the UK and EU had a ‘duty to deliver something which is good for people’ [File: Vincent Kessler/Reuters]

Brussels rallies amid elevation of Brexiteer Boris Johnson to UK’s highest office, says it will stick to Brexit deal.

The European Union‘s elect for the bloc’s top job has warned incoming British Prime Minister Boris Johnson of “challenging times ahead” over his plan to renegotiate Brexit.

Ursula von der Leyen, the German conservative set to take over at the helm of the European Commission from November, said on Tuesday that all parties had a “duty to deliver something which is good for people in Europe and the United Kingdom“.

But, in a cautionary statement, she also warned there would be “challenging times ahead of us”, with the bloc and Johnson set to lock horns in the coming weeks over his vow to renegotiate the withdrawal agreement brokered between the EU and outgoing UK leader Theresa May or leave on the scheduled departure date of October 31 without a deal.

Von der Leyen’s comments came just hours after Johnson was confirmed as the new leader of the UK’s ruling Conservative Party and soon-to-be successor to May after beating his rival, Foreign Secretary Jeremy Hunt, in a ballot of party members following a weeks-long leadership contest.

Johnson, one of the key advocates of exiting the EU during the 2016 Brexit referendum, won the votes of more than 92,000 Conservative Party members, almost twice as many as Hunt.

May will leave office on Wednesday after going to Buckingham Palace to see Queen Elizabeth II, who will then formally appoint Johnson as prime minister.

“We are going to get Brexit done on October 31, and we are going to take advantage of all the opportunities it will bring in a new spirit of ‘can do’,” Johnson, 55, said after the result was announced.

“Like some slumbering giant, we are going to rise and ping off the guy-ropes of self-doubt and negativity.”
‘Best deal possible’

Minutes before Johnson’s victory was announced by the Conservative Party, European Commission deputy chief Frans Timmermans – who will retain his job under Von der Leyen – said the EU would not agree to change the withdrawal accord.

“The United Kingdom reached an agreement with the European Union and the EU will stick to that agreement,” Timmermans told reporters at a press conference in Brussels.

“This is the best deal possible,” he added.

The withdrawal agreement was sealed after months of arduous negotiations between London and Brussels but has since been rejected three times by the UK’s parliament, prompting May to announce her resignation in May amid a political impasse.

The EU is bracing for a no-deal Brexit, or another delay to Britain’s departure, amid Johnson’s vows to follow through on his campaign promises.

“A no-deal Brexit, a hard Brexit, would be a tragedy – for all sides, not just for the United Kingdom,” Timmermans said. “We are all going to suffer if that happens.”
Backstop stumbling block

Johnson wants to scrap the so-called “Irish backstop”, an insurance policy written into the Brexit withdrawal deal to maintain an open border for economic and security reasons between Ireland and Northern Ireland, a constituent of the UK, until a new British-EU trade deal is reached.

Those in favour of Brexit fear the backstop could trap Britain in EU trading rules indefinitely and prevent the UK from striking trade deals with countries around the world, given that a new trade accord with the bloc could take years to negotiate.

But the bloc’s Brexit negotiator made clear to the new British leader that any major change in the divorce terms London had already agreed to was off-limits.

“We look forward to working constructively with PM Johnson when he takes office, to facilitate the ratification of the withdrawal agreement and achieve an orderly Brexit,” Michel Barnier said in a Twitter post on Tuesday.

“We are ready also to rework the agreed declaration on a new partnership,” he added, referring to a political declaration on wished-for future relations that accompanies the legally binding withdrawal agreement.

We look forward to working constructively w/ PM @BorisJohnson when he takes office, to facilitate the ratification of the Withdrawal Agreement and achieve an orderly #Brexit. We are ready also to rework the agreed Declaration on a new partnership in line with #EUCO guidelines.

Barnier’s comments came after Irish Foreign Minister Simon Coveney repeated on Sunday that the EU would not change the withdrawal agreement which contains the backstop, saying if Britain tore it up, “We would both be in trouble”.

But Coveney also suggested a new UK prime minister could secure some changes to the political declaration on the future relationship between Britain and the EU that might avoid the need for the backstop.

« UGANDA: @PoliceUG are now the ones robbing the nation (Previous News)
(Next News) UGANDA: Do not compromise your integrity by publishing slanted stories »