Ugandan election candidate Bobi Wine speaking on Amanpour ahead of the presidential elections 02:37 – This election is not on level ground
By Eoin McSweeney and Stephanie Busari, CNN
Updated 6:30 AM ET, Thu January 21, 2021
(CNN)The European Union has joined a growing number of international voices calling for a probe into Ugandan election abuses and violence that left more than 40 people dead in the lead up to the polls.
Opposition candidates were harassed by security forces, the media was suppressed by the government, and observers’ offices were raided, said the EU Council of Ministers in a statement on Wednesday.
It called on all parties to refrain from violence and for “election challenges and complaints to be addressed in an independent and transparent manner.” 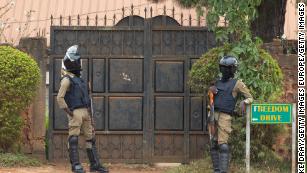 Uganda’s lesson to other authoritarians: controlling the internet works

Uganda’s longtime leader President Yoweri Museveni was declared the winner for a record sixth term, amid an internet blackout and allegations of abuse.

Wine — a singer-turned-politician, whose real name is Robert Kyagulanyi — has been under house arrest after the military surrounded his home on Friday. He maintains the election was rigged.
“I thank all friends in Uganda and abroad who continue to stand with us until we put an end to this indignity,” he said in a tweet on Thursday.
The 18-month old niece of Wine’s wife, Barbara Itungo Kyagulanyi, is in the residence and her father has been denied access because nobody is allowed to leave or come into the compound, Wine said on Twitter.

Human rights groups spoke out against Wine’s detention and the political climate in the country as President Museveni embarked on an election victory tour of the country Thursday.
“It is neither a crime to stand for president nor to want to challenge the election results in court,” said the regional director of the human rights NGO, Deprose Muchena, in a statement.

“This continued confinement is politically motivated and a blatant violation of their human rights. It must be lifted immediately and without any conditions.”
In the weeks leading up to the election, there were several incidences of violence and human rights violations said Human Rights Watch.
“The abuses included killings by security forces, arrests and beatings of opposition supporters and journalists, disruption of opposition rallies, and a shutdown of the internet,” said the international human rights NGO in a statement. 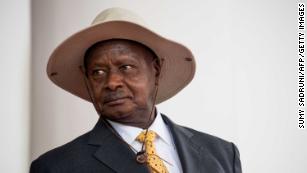 If he wins Uganda election, Museveni will work with his seventh US president. Here’s how the US has helped him stay in power

Museveni’s senior press secretary, Don Wanyama, referred CNN to the police when contacted about Wine’s house arrest, implying that the President knew nothing about the detention.
“Why would he?” Wanyama said. “Stop Musevenising everything. Talk to the police.”
The Ugandan Police Force did not immediately respond to requests for comment.
The police said in a tweet they made arrangements with Wine to access his lawyers on Tuesday, but they claim he refused to meet them.

In a press briefing on Wednesday, the minister for foreign affairs, Sam Kutesa, said the conduct of some of the presidential candidates was in “open defiance” of the electoral commission’s guidelines.
Jake Sullivan, National Security Advisor for United States President-elect Joe Biden, described the house arrest as “deeply concerning” on Sunday.

On Saturday the US State Department called for authorities to address election “irregularities.”
The United States ambassador to Uganda, Natalie E. Brown, was blocked by Ugandan security forces from visiting presidential candidate Bobi Wine on Monday.
Uganda’s internet shutdown was described by Netblocks founder Alp Toker as a “textbook case of pre-meditated, pre-election internet blackout,” as connectivity was restored after five days.
This impeded the work of journalists, observers, and party agents, said the EU ministers.
The internet shutdown was needed to “stop the vitriolic language and incitement to violence,” said the Ministry of Foreign Affairs in a tweet on Wednesday.